Gov. Roy Cooper holds the Republican budget in his left hand, his suggested changes in his right, as Senate Minority Leader Dan Blue looks on. (via WRAL)

Amid the coronavirus outbreak, North Carolina officials have asked residents to limit their movement.

Gov. Roy Cooper issued a "stay-at-home" order that lasts until the end of the month.

And one Facebook post that’s circulating on the social media site suggests there’s a blockade along North Carolina’s northern border.

"North Carolina & Virginia State line is closed. Nothing in or out," the post reads. As of Wednesday, it had been shared more than 800 times.

Is it true that the North Carolina-Virginia border is closed? No. 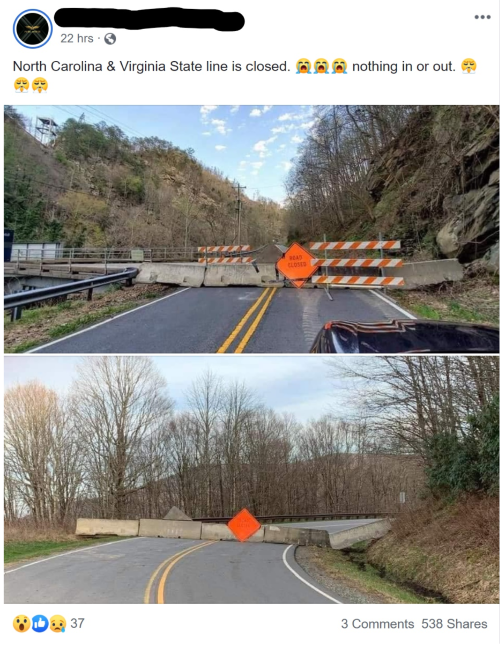 This is a gross exaggeration of the situation that could add to the anxiety North Carolinians already face.

We reached out to authorities in both states.

"No action has been taken by the state of North Carolina to close our border with Virginia," said Kelly Haight Connor, communications manager for the NC Department of Health and Human Services.

In fact, there has been no sweeping order to close state borders either, said Steve Abbott, spokesman for NC’s Department of Transportation.

However, some local NC governments have gone a step further than Cooper’s order and enacted movement restrictions within their jurisdictions.

The bottom image of the Facebook post was used in a story from WATE about authorities blocking a highway between Robbinsville and Tellico Plains, Tennessee. That decision to block that road was made by the Graham County Emergency Planning Committee, WATE reported.

A list of municipal movement restrictions can be found by clicking "COVID-19 related information" on DriveNC.gov.

The NC-Virginia border isn’t closed, according to officials from both states. Nor is there a statewide ban on movement in or out of the state.

The post broadcasted serious misinformation at a time when people are nervous about how the COVID-19 pandemic is affecting their work and their access to essential goods. We rate this claim Pants on Fire.

Phone interview with Steve Abbott, spokesman for the North Carolina Department of Transportation.