President Donald Trump has openly said he opposes emergency funding for the U.S. Postal Service because he doesn’t want to see it used for mail-in voting.

"They need that money in order to make the Post Office work so it can take all of these millions and millions of ballots," Trump told Fox News on Aug. 13, 2020, reiterating his frequent and false claim that mail-in voting is rife with fraud.

And that has opened the conspiracy floodgates.

It gave life to a long-running claim his opponent, Democrat Joe Biden, and others have made for months that Trump wants to limit the Postal Service to restrain mail-in voting. (Democrats have long been perceived to benefit most from mail-in voting, and a Marquette Law School poll released Aug. 11, 2020, confirmed this in Wisconsin, showing Biden leading by 67 points among those planning to vote absentee by mail.)

And it triggered an avalanche of allegations and news coverage about various Postal Service actions, from removing sorting machines to pulling mailboxes off the streets.

One claim that drew a particularly large audience is built around a picture of stacks of mailboxes. The picture — described as originating in Wisconsin — has taken off across Facebook, Instagram, Twitter, Reddit and elsewhere, being shared hundreds of thousands of times and viewed millions of times within a few days of the earliest posts on Aug. 14, 2020.

The most widespread version on Facebook is a screenshot of an Aug. 15, 2020, tweet that describes the picture this way:

"Photo taken in Wisconsin. This is happening right before our eyes. They are sabotaging USPS to sabotage vote by mail. This is massive voter suppression and part of their plan to steal the election."

This post was flagged as part of Facebook’s efforts to combat false news and misinformation on its News Feed. (Read more about our partnership with Facebook).

Are these really mailboxes rounded up to suppress mail-in voting?

The one accurate element in this claim is that the picture is from Wisconsin.

The earliest version of this picture we could find — hat tip to twitter user @ushadrons, one of many online sleuths looking into this claim — surfaced at noon central time Aug. 14, 2020. It simply included the caption "Whole thing looks terrible." A followup comment noted it was from Wisconsin.

Another Reddit user posted the same picture an hour later labeled as "Harford, Wisconsin today," misspelling the name of Hartford. Ensuing claims about voter suppression drew pushback from another user, who posted a picture of himself at the company gate, noting he lives one minute away in Hartford. His picture showed a man standing outside a very similar-looking fence with a Hartford Finishing Inc. sign on it and a very similar stack of mailboxes in the background. 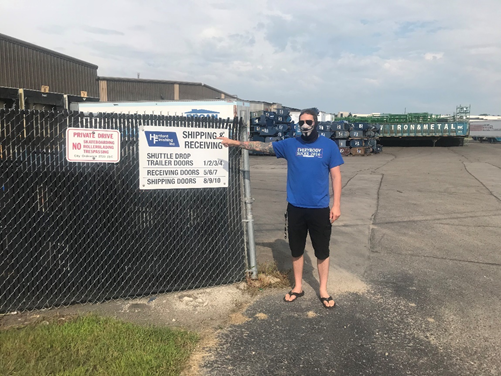 By all accounts, this location is correct.

Hartford Finishing — in businesses since 1986 with about 220 current employees — has a contract with the Postal Service to refurbish old mailboxes. The business specializes in powder painting systems. Job ads the company posted in 2018 were for positions that specialize in "blues postal mailboxes." The Postal Service confirms the working relationship.

The company did not immediately respond to an email seeking comment, but Street View images from Google Maps show stacks of mailboxes are a regular occurrence there. A picture taken in August 2019 shows stacks far larger than the one in the viral image, in fact.

The gate and buildings also match the image posted by the Reddit user in Hartford.

The core question then is whether the existence of these boxes at the company proves any kind of voter suppression. That’s the heart of the claim we’re checking here and many others connected to this picture online.

"THEY AREN’T EVEN TRYING TO HIDE IT NOW," actress Jeri Ryan said in a Facebook post sharing the Hartford image.

But they’re all wrong.

Claims in this vein have surfaced around the country in response to images of other mailboxes stacked on the ground or on flatbed trucks.

The Postal Service has said these are part of long-running, standard practices. Little-used boxes are removed (after a public notice is posted on them) and dilapidated boxes are replaced with new ones, while the old ones then go in for refinishing.

Here’s the full response from the Postal Service when we asked them about the Hartford picture.

The Postal Service reviews collection box density every year on a routine basis to identify redundant/seldom used collection boxes as First-Class Mail volume continues to decline. Based on the density testing, boxes are identified for potential removal and notices are placed on boxes to give customers an opportunity to comment before the removal decision is made. This process is one of the many ways the Postal Service makes adjustments to our infrastructure to match our resources to declining mail volumes. Given the recent customer concerns the Postal Service will postpone removing boxes for a period of 90 days while we evaluate our customers’ concerns.

The photo in question is of a vendor we have done business with for several years. They are a contractor that repairs or destroys old collection boxes. They now make new collection boxes also. Photos such as this appear every couple of years.

In response to the widespread social-media blowback, the Postal Service said Aug. 14, 2020, it was suspending all removal operations until after the election, the Washington Post reported.

A viral picture circulating on social media says a picture of stacked mailboxes is proof of voter suppression in Wisconsin.

The picture is from Wisconsin, taken at a Hartford company, but it’s not proof of anything nefarious.

USPS contracts with Hartford Finishing to repair or destroy old mailboxes. The mailboxes shown could have been removed — after a public notice — due to lack of use (following a long-established process), or they could have been replaced with new boxes due to their condition.

Milwaukee Journal Sentinel, Another fraught party divide in Wisconsin: most Republicans plan to vote in person, most Democrats by mail, Aug. 12, 2020

Boston.com, The USPS explains why mailboxes were rounded up in Brighton, Aug. 15, 2020