Facebook posts
stated on September 21, 2019 in a Facebook post:
Says after Australia passed a "new law" that forced gun owners to give up over 640,000 firearms, the country saw a dramatic increase in homicides, assaults and robberies.

A photograph that shows a truck unloading a heap of firearms has been shared thousands of times on Facebook.

The image is usually displayed alongside text that claims Australia passed a "new law" that forced gun owners to surrender 640,381 firearms and that, one year later, statistics show a national surge in violent crimes such as homicides, assaults and robberies. 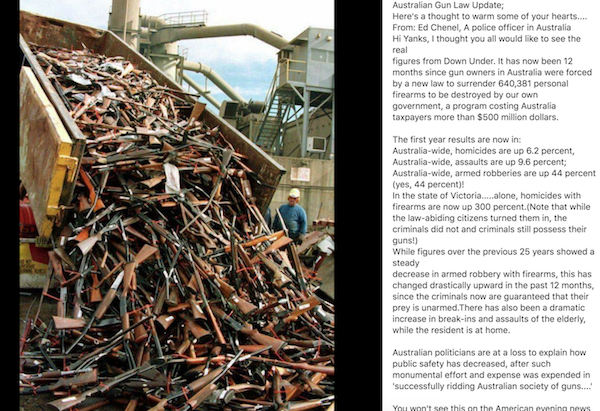 This chain message has been going around the internet since at least 2009.

The statistics didn’t add up then and still don’t today.

The photograph itself is real and was taken in Australia, but it’s from the late 1990s. We tracked it down using a reverse-image search and found it was taken by photographer David Gray on July 29, 1997.

The caption says the truck was unloading prohibited firearms at a Sydney scrap-metal yard and that they were later destroyed: "The guns were handed in over the past month under the Australian government's buy-back scheme. A total of 470,000 guns have been collected nationally, with owners receiving a $243 million (US $180 million) in compensation."

The caption continues to explain that the buyback program was set up due to tighter gun laws enacted after the April 1996 Port Arthur massacre, when a gunman opened fire in a cafe in Tasmania, killing 35 people in the worst mass murder in Australia’s history.

The Australian government thereafter in 1996 passed the National Firearms Agreement in response to the shooting. The measure outlawed automatic and semi-automatic rifles, as well as pump-action shotguns, and instituted the buyback program, which was funded by a tax levy that raised about $500 million. As a result, approximately 640,000 weapons were turned over to the government and firearm owners were paid around $304 million, according to a 1997 report by the Australian National Audit Office.

So, the post is correct that 640,000 weapons were handed over to the government. But this happened nearly 25 years ago as part of a buyback program and those participating received financial compensation.

More importantly, though, the post is wrong in its claim that the measure resulted in more violent crime in the country.

The post inaccurately says that one year after the buyback, homicides went up 6.2%, assaults went up 9.6% and armed robberies went up 44%. It also says that, in the state of Victoria, homicides with firearms increased 300%.

What really happened is homicides declined about 9% to 333 in 1998 compared with a year prior, according to the Australian Institute of Criminology.

The Australian Bureau of Statistics reported that armed robberies increased by 20% (not 44%), but the number involving firearms decreased to a six-year low of 19%.

If we interpret the post to be referring to today’s numbers, it’s still wrong.

The rates of various types of violent crime (excluding sexual assault) has, depending on the crime, stayed the same or declined over the last several years.

To summarize our findings, Australia instituted a buyback program in the late 1990s after passing stricter gun legislation, which resulted in more than 640,000 firearms being turned into the government. Meanwhile, the rates of violent crimes did not and have not dramatically increased, as the post suggests.

AFP FactCheck, No, this post does not contain accurate statistics about Australia’s gun laws, June 11, 2019