Melissa Melendez
stated on July 9, 2020 in a tweet:
“There is no science or data to suggest that kids are at risk from COVID.”

A California state lawmaker jumped into the national debate on whether to reopen schools this fall amid the rapid spread of COVID-19, by claiming there’s no evidence children are in harm’s way.

"There is no science or data to suggest that kids are at risk from COVID," Republican state Sen. Melissa Melendez tweeted on Thursday.

Melendez, who represents much of Riverside County, went on to argue for a full reopening.

"Students should return to school, in person, and all school sports/activities should resume. Let’s stop robbing our kids of the education we owe them. We can do this safely." 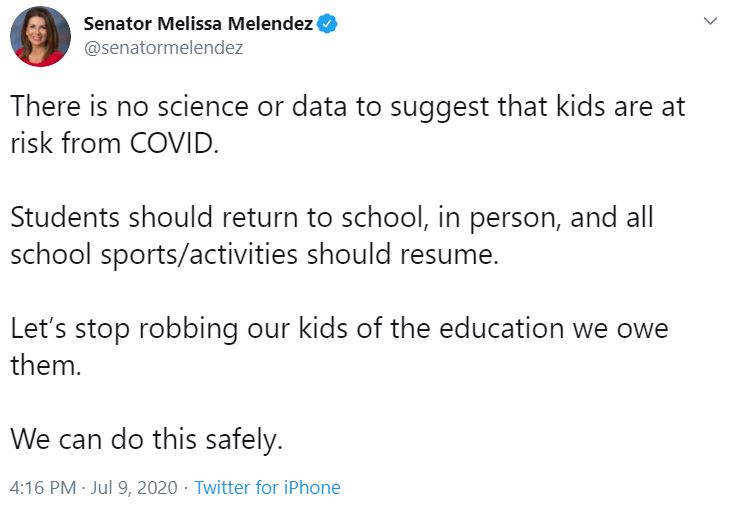 We won’t put a Truth-O-Meter rating on the second half of her tweet because it’s her opinion. But the first part makes a claim about the facts.

Are there really no COVID-19 studies showing a risk to children?

We decided to check that out.

Benjamin Linas is an associate professor of epidemiology and an infectious disease physician at Boston University School of Medicine. He wrote a recent article in Vox advocating for the reopening of schools this fall.

But when asked about Melendez’s claim, he called it "an oversimplification and untrue."

"There absolutely are studies of COVID-19 risk in children. It is silly to say that kids do not have risk," Linas wrote in an email. "The good news is that medical consensus at this time, based on data, is that children generally have a mild form of COVID and that many are asymptomatic. Overall, if your child contracts COVID, they will be OK. That is good news. But to take that and say that kids are ‘not at risk’ is an oversimplification and untrue. Some children have died of COVID, some have been in ICUs."

In his Vox article, Linas pointed to public health reporting that showed children under the age of 18 made up only 2% of coronavirus cases in the United States, even though they represent 22% of the total population.

He wrote that similar studies in Chicago and Massachusetts found that children make up fewer COVID-19 cases than anticipated, as have studies in Italy, South Korea, and Iceland.

Looking at data nationally and worldwide at the end of May, the U.S. Centers for Disease Control and Prevention concluded: "Based on these early studies, children of all ages are at risk for COVID-19; however, complications of COVID-19 appear to be less common among children compared with adults based on limited reports from China and the U.S."

"This lawmaker is wrong," Riley wrote in an email. "Though rare, there are well documented cases of severe complications kids develop with COVID-19. In Europe and the US, several cases of Kawasaki-like disease have been reported. (New York City) had about 100 cases with 3 deaths."

Riley is referring to a rare but serious condition found in young people this spring known as Multisystem-Inflammatory Syndrome. Doctors in Europe and the United States have attributed it to complications linked to COVID-19.

While the risk of severe illness from COVID-19 is low for children, the professor added that "kids can serve as a reservoir for transmission to their parents and other relatives. Parents who may have diabetes, high blood pressure, and other underlying medical conditions will be at risk for severe complications and even death."

When asked about the claim in question, a spokesperson for Sen. Melendez said her tweet was based on statements made at recent White House Coronavirus Task Force events. He acknowledged "the exact phrasing" of those statements "is not the same" as the senator’s tweet.

Those statements line up with what other health experts have said. But they don’t specifically support Melendez’s broad claim "There is no science or data to suggest that kids are at risk from COVID."

A day after Goza’s remarks, White House health advisor Dr. Deborah Birx disputed the idea that children have been proven to be less likely to spread COVID-19, saying there’s not enough data to arrive at that conclusion, CNBC reported.

Looking at the age groups tested in the United States, "the lowest tested portion is the under-10-year-olds," Birx said Wednesday.

"There’s no data one way or the other right now," to determine how much children will spread the disease, added UC Berkeley’s Dr. Riley, in a follow-up phone interview.

California State Sen. Melissa Melendez recently claimed there is "no science or data to suggest that kids are at risk from COVID."

Medical experts say that’s just plain wrong. There are studies that have examined children and found they are at risk of COVID-19, albeit less risk than adults.

As one infectious disease expert put it, some "children have died of COVID, some have been in ICUs."

While children aren’t at a high risk for complications of the coronavirus, experts said the data is not yet clear about their role in transmitting it. There’s a tense debate nationally about whether reopening schools will lead to a greater spread of COVID-19 not just among children but also among family members and wider communities.

That debate is still playing out. What’s clear is that Melendez went too far in her claim, reducing a complicated topic to an oversimplified, unsupported tweet.

We rate her claim False.