An image of a tweet that appears to be from President Donald Trump would have you believe that he encouraged South Dakota to keep its border with California closed. But the two states don’t share a border. And the tweet isn’t real.

"Thank you to the Great people of South Dakota. The state is doing a tremendous job with the coronavirus. I told the governor that everyone is fine without a mask. They just need to keep there border with California closed! That state is full of LOSERS!" 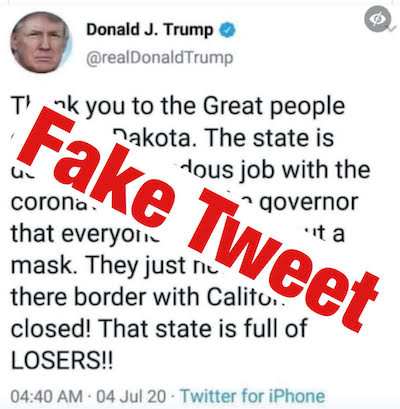 One Facebook user who shared the tweet wrote, "A president who can’t bother to look at a map, has no clue where states are in relation to each other and is the most ignorant person to EVER be in the WH."

The post was flagged as part of Facebook’s efforts to combat false news and misinformation on its News Feed. (Read more about our partnership with Facebook.)
The tweet is fabricated. There is no record of it on Trump’s Twitter timeline on July 4 or any other day, and it doesn’t appear in Twitter searches for posts with that wording or in databases that track deleted tweets.
RELATED: No, Trump didn’t tweet this about the Confederate flag
The fictitious post appeared shortly after Trump’s visit to Mount Rushmore in South Dakota for a July 4 holiday event. The landlocked state borders six other states, but California isn’t one of them.
The alleged post is not captured in the database of deleted tweets maintained by ProPublica.
We also found no evidence that shows the tweet ever existed on the platform, and no news outlets have reported that Trump tweeted this.
We rate it Pants on Fire!

Reuters, Fact check: Trump did not tweet about South Dakota closing its border with California, July 9, 2020

YouTube videos
stated on May 16, 2021 a YouTube video:
Says Don Lemon’s show has been canceled and he is leaving CNN.

Instagram posts
stated on April 25, 2021 an Instagram post:
Vaccine herd immunity doesn’t exist because 100% of the population would have to be vaccinated for it to work.

Instagram posts
stated on April 15, 2021 an Instagram post:
Mariah Carey faked getting her COVID-19 vaccine because the needle can’t be seen coming out of her arm.