Gov. Gavin Newsom wears a protective mask on his face while speaking to reporters at a restaurant during the coronavirus outbreak in Oakland, Calif., Tuesday, June 9, 2020. AP Photo/Jeff Chiu

One Facebook post viewed more than 80,000 times on the day of Newsom’s order claimed the governor hadn’t really made such a requirement and has no power to do so.

‼️GREAT NEWS!‼️ Contrary to the LA Times story, Newsom did NOT issue any mandatory mask orders in CA! (He has no legal authority to do so.) This was new GUIDANCE (not a public health order) from the CA State Dept of Health, and it is a RELAXATION of the previous orders!!!

It was flagged as part of Facebook’s efforts to combat false news and misinformation on its News Feed. (Read more about PolitiFact California’s partnership with Facebook).

The claim was made by a woman in Orange County who heads a group that also claims healthy people should not wear masks. PolitiFact in May found there’s no evidence that wearing standard masks, such as surgical masks or ones made of fabric, is harmful to the general public.

In Northern California, Nevada City Mayor Reinette Senum claimed on Facebook "Our Governor does NOT have that unilateral power to make such orders." She linked to a YouTube video of the Orange County woman.

While the act of wearing a mask, or choosing not to, has become politicized nationwide, leading public health officials and recent studies say wearing a face covering is an effective measure for reducing the spread of COVID-19 when people gather.

Newsom’s requirement is lauded by some and seen as an intrusion by others. For this fact check, we wanted to know whether it rests on solid legal footing.

The governor announced new rules through a California Department of Public Health press release on June 18. "Simply put, we are seeing too many people with faces uncovered – putting at risk the real progress we have made in fighting the disease," Newsom said in the release.

There’s been some confusion about whether the announcement makes wearing a mask mandatory because the new CDPH requirements are technically termed "guidance."

But as the Sacramento Bee explained, a previous executive order issued by Newsom that required Californians to follow public health guidelines grants the state the ability to enforce CDPH rules.

The governor's office also made the announcement on social media: 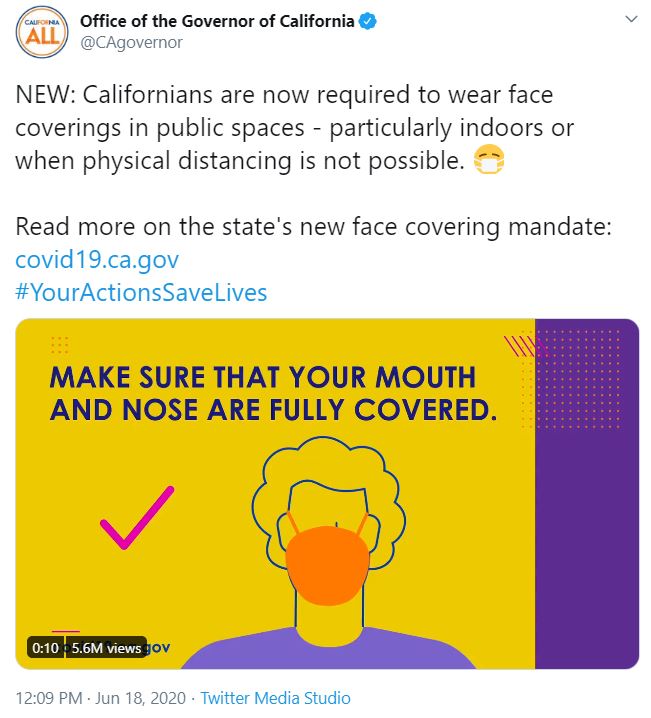 People in California must wear face coverings when they are in the "high-risk situations," including:

Some law enforcement agencies across the state have said they will not enforce the mandate, but will encourage residents to voluntarily comply with it.

Is The Requirement Legal?

We asked both the Newsom administration and two constitutional law experts about this issue.

A spokesperson for the administration cited the California Emergency Services Act as giving the governor the power to make masks mandatory. Through that law, "the State Legislature has given the Governor broad authority to respond to state emergencies like the COVID-19 pandemic," Kate Folmar, a spokesperson for the state’s Health and Human Services Agency, said in an email.

Leslie Jacobs, who teaches constitutional law at McGeorge School of Law in Sacramento, agreed that the act along with the state’s broad public health authority gives Newsom extensive power to address the pandemic, including requiring face coverings. It’s the same law he used to justify his statewide stay-at-home order in March.

Levinson added in a phone interview that the state has "broad authority when it comes to health and welfare measures."

Both law professors said they believe Newsom’s order would stand up to a legal challenge, unless new and credible studies show face coverings are not effective.

"Based on what we know now, I believe this would stand up," Levinson added.

The professors said Newsom’s position would be strengthened should the Legislature pass a bill requiring face-coverings. But, they said, because Newsom’s requirement is so closely tied to an immediate public health issue, that action is probably unnecessary.

Jacobs added that the governor’s powers during the pandemic are far-reaching. Under his authority, he could go even further to mandate things like temperature checks at sporting events or require face shields in some settings.

Should the mask order or any future measures be challenged in court, she said Newsom would have to show that the state truly needs to require them and that they can only be done in the way prescribed by the state.

To justify the move, the Newsom administration pointed to the California Emergency Services Act, the same authority it used to order a statewide stay-at-home requirement in March due to the COVID-19 crisis.

Unless face coverings are shown to be ineffective, they said Newsom’s requirement should also hold up against legal challenges.

We rate the claim the governor doesn’t have the power to make masks mandatory as False.

Sacramento Bee, Northern California mayor lashes out at Newsom’s mask order: ‘There is no law’, June 20, 2020.

PolitiFact, There’s no evidence that wearing standard masks is harmful to your health, May 19, 2020