Tweets
stated on March 10, 2020 in in a tweet:
Says Daniel Radcliffe has the coronavirus.

Harry Potter is not in the hospital wing with coronavirus.

As the number of cases continues to grow, false claims about notable figures and celebrities contracting the virus are circulating on social media.

The latest one comes by way of a now-deleted tweet from a fake BBC Twitter account, which claimed that actor Daniel Radcliffe, known for his portrayal of Harry Potter in eight films, had become the "first famous person" to test positive for the coronavirus. 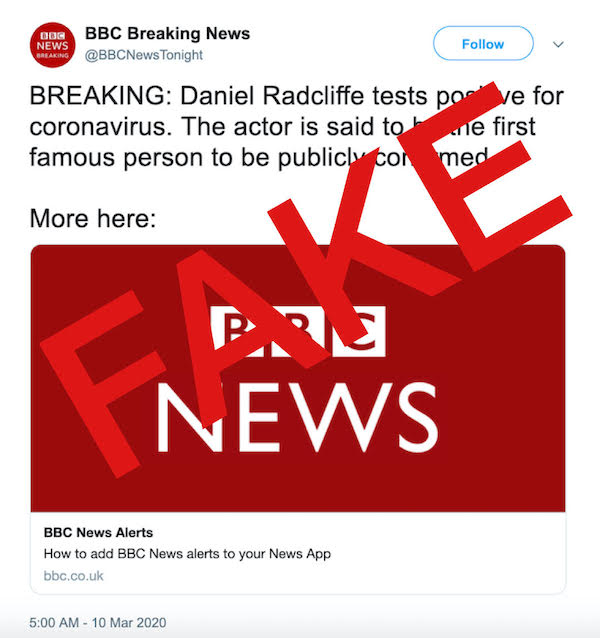 The tweet was flagged as part of Facebook’s efforts to combat false news and misinformation on its News Feed. (Read more about our partnership with Facebook.)

The Twitter account, @BBCNewsTonight, is not affiliated with the British Broadcasting Co. and appears to have been suspended.

The tweet provided a link for users to learn "more information." That led to a genuine BBC news alert page, but one that hasn’t been updated since 2017 and has nothing to do with Radcliffe or his fake diagnosis.

The actor’s publicist also told Buzzfeed News the rumor was "not true."

Still, the tweet fooled users before it was deleted, including New York Times reporter Maggie Haberman, who later apologized on Twitter for sharing the false claim.

Earlier today, I RTed a fake BBC account and un-RTed when a very helpful reader flagged it. My apologies for confusion. Here's a good read on the hoax: https://t.co/qdfjfdza0v

The Boy Who Lived does not have the coronavirus. Obliviate this from your memories.

Joe Biden
stated on June 30, 2020 a speech:
“The CDC tried to develop clear guidelines about what the stages of re-opening should look like — the administration delayed and scaled them back."

Bloggers
stated on July 1, 2020 a story:
Says John Elway told NFL players “Kneel on my field and you’re fired on the spot.”

Viral image
stated on June 26, 2020 a Facebook post:
A Denver International Airport mural of people wearing masks was painted in 1994.