A manipulated photo of a massive wall in front of the White House was widely shared as real on social media on Election Day.

One Facebook user who shared the image wrote in the caption that it was "truly a sad spectacle." 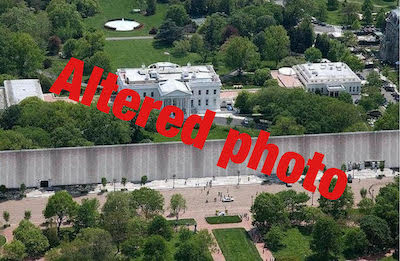 A reverse-image search reveals that the original aerial photograph of the White House was taken in 2009 and doesn’t include the towering wall.

Shadows from the trees, which appear to stick out underneath the wall despite it matching them in height, provides further evidence that the photo is doctored.

The National Park Service announced that temporary, anti-scale fencing was set up around the White House complex, but it does not resemble the wall in the post’s photo.

This image is outdated and altered. Pants on Fire!

Instagram posts
stated on April 25, 2021 an Instagram post:
Vaccine herd immunity doesn’t exist because 100% of the population would have to be vaccinated for it to work.

Instagram posts
stated on April 15, 2021 an Instagram post:
Mariah Carey faked getting her COVID-19 vaccine because the needle can’t be seen coming out of her arm.

Viral image
stated on December 21, 2020 an Instagram post:
Photos reveal Greta Thunberg is a trained actress who comes from a long line of actors.

Facebook posts
stated on April 6, 2021 a Facebook post:
Schools stopped teaching children cursive so they wouldn’t be able to read the U.S. Constitution and other historical documents.