Mark Walker
stated on July 19, 2021 in a tweet:
Says he worked to pass the 2018 farm bill “that helped farmers, invest(ed) in rural broadband, and added work requirements for able-bodied adults, Budd voted NO.”

A Republican U.S. Senate candidate in North Carolina is questioning a primary opponent’s commitment to local farmers and to policies championed by former President Donald Trump.

"False. In 2018, while I worked with Ron DeSantis and Pres Trump to pass a Farm Bill that helped farmers, invest in rural broadband, and added work requirements for able-bodied adults, Budd voted NO." (DeSantis was a Florida congressman then.) 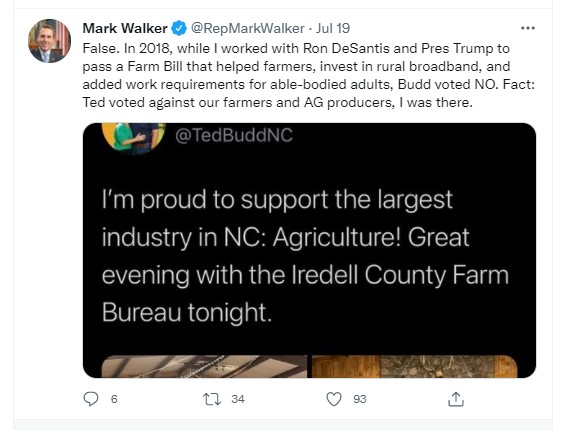 Walker, Budd and former North Carolina governor Pat McCrory are three of the biggest names among the six candidates on the Republican side. McCrory, piggy-backing on Walker’s tweet, also took the opportunity to bash Budd.

Their tweets aim to erode Republican voters’ trust in Budd, who Trump endorsed. In this fact check, we’ll explore the following questions:

It turns out, Walker is right about Budd opposing the farm bill. The bill did also expand the government’s rural broadband loan program.

But Walker’s suggestion that it "added work requirements for able-bodied adults" is misleading. One major reason the bill became law: the Senate scrapped the House’s proposed changes to the welfare eligibility requirements.

What the record shows

The federal farm bill is usually renewed every five years. And in 2018, Republicans controlled the House, Senate and White House. However, they struggled to pass legislation as their members disagreed over policies affecting agriculture, food stamps and even immigration.

Budd and Walker were in Congress in 2018 and at times voted with different wings of their party on the legislation, which was revised several times.

In a May 18 vote on an early version of the farm bill, officially known as the Agriculture Improvement Act of 2018, Budd voted no and Walker voted yes.

While Walker voted with House leadership in support of the bill, Budd opposed it along with members of the conservative Freedom Caucus. The caucus withheld its support because leadership didn’t commit to a vote on their preferred immigration bill.

In a June 21 vote, both voted yes on a version that aimed to reform the Supplemental Nutrition Assistance Program, known for providing food stamps. The bill sought to tighten eligibility criteria and impose stricter work requirements on up to 7 million food stamp recipients, Politico reported.

In a Dec. 12 vote, the House approved a bill that strayed from their June 21 version and adopted more of the Senate’s preferences. Walker supported the compromise bill and Budd voted no. On Dec. 20, Trump signed this version of the bill.

It’s fair to say the first two claims in that sentence are true. However, the part about work requirements is misleading.

The bill that Walker voted on (and Trump signed) famously left out major SNAP benefit changes that the House passed and Trump initially called for.

Robin Vos
stated on November 22, 2022 in Public statement
“A lot of the programs (that were) started during the pandemic are still going, even though the pandemic is long over.”

A report by the Congressional Research Service said the bill made only a "few eligibility changes. Specifically, the bill "reduced state waivers for work requirements, meaning states could exempt only 12% of their SNAP recipients from work requirements, as opposed to the 15% in the 2014 Farm Bill," according to a blog on the Harvard University’s Center for Health Law and Policy Innovation website

The omission of major changes, though, was "key" in reaching a compromise, according to an expert who wrote a paper on the bill negotiations.

It was also one of the reasons Budd opposed it, according to senior campaign advisor Jonathan Felts.

"The 2018 Farm Bill stripped out the important reforms that would have promoted more stringent work requirements for those receiving welfare assistance," Felts said.

The Walker campaign, for its part, pointed out that Trump announced efforts to increase work requirements when he signed the bill.

"Millions of able-bodied, working-age adults continue to collect food stamps without working or even looking for work," Trump said during the bill-signing ceremony on Dec. 20. "Therefore, I have directed (Agriculture Secretary Sonny) Perdue to use his authority under the law to close work requirement loopholes in the food stamp program. Under this new rule, able-bodied adults without dependents will have to work, or look for work, in order to receive their food stamps."

But that effort was separate from the farm bill, and quickly faced legal challenges. Last October, a federal judge blocked Trump’s rule to apply work requirements through the Agriculture Department.

Apart from the SNAP benefits, PolitiFact wondered if the Budd campaign’s description of farm subsidies was accurate. In that email to PolitiFact, Felts described it this way:

"As any family farmer will tell you, you don’t support the farm by giving away the farm, and the 2018 Farm bill was bloated with overspending that also left out critical reforms to federal farm subsidies that would have better directed federal assistance to small, family farms that needed it the most."

Vincent Smith, an agriculture policy expert at the conservative American Enterprise Institute, agreed that the bill was bloated.

Virtually "any self respecting economist would say that money is flowing to folks that don’t need it and businesses that would be perfectly viable without it," Smith told PolitiFact NC in a phone interview.

What about Budd’s claim that the bill left out reforms that would have "directed federal assistance to small, family farms that needed it?" Smith said Budd has a point, but that his explanation could give people a misconception about American farm ownership.

"The candidate is right that these monies (in the farm bill) were heavily targeted to the largest farms," Smith said. "Now, 98% of all farms would describe themselves as family-owned farms. Only 2% are owned by significant corporate entities."

In other words, it would be misleading to suggest the farm bill didn’t help family farms. It did. But Budd is right that larger farms benefit the most from the government’s system for offering more subsidies to farms that produce more crops.

To be clear, the bill when signed simply renewed many of the agriculture policies that were already law. And while many agricultural groups supported the bill, it also had its critics.

Farm Aid, the group founded by Willie Nelson and other musicians, commended Congress for finally passing the legislation. However, it said the bill "fails spectacularly" to address the core challenges facing farms.

"The future of family farm agriculture requires a dramatic shift in policy towards fair pricing, supply management programs, cracking down on corporate goliaths and accelerated attention to the climate crisis. By those standards, this farm bill fails," the group wrote on Dec. 20.

Walker said that he voted for the farm bill, which "added work requirements for able-bodied adults" and that Budd voted no.

It’s true that Walker voted for the bill that Trump signed and Budd voted against it. However, it’s misleading for Walker to say the bill "added work requirements for able-bodied adults."

Walker voted for more work requirements in a bill the House passed in June, but the version that Trump signed didn’t include those requirements.

The statement is partially accurate but leaves out important details or takes things out of context. We rate it Half True.

Voting records for the Agriculture Improvement Act of 2018 on Congress.gov.

Transcript of President Trump’s remarks about the Farm Bill on Dec. 20, 2018.

Blog by the American Enterprise Institute, "Where the money goes: The distribution of crop insurance and other farm subsidy payments," posted Jan. 9, 2018.