Instagram posts
stated on August 17, 2021 in on social media:
The man next to Mike Pompeo in a November 2020 photo “is the guy the Trump administration helped get out of jail in 2018 and who is now the 'president' of Afghanistan."

• The U.S. envoy chosen by President Donald Trump, Zalmay Khalilzad, has publicly confirmed that he requested and secured the release of senior Taliban official Abdul Ghani Baradar from prison in Pakistan ahead of negotiations to end the war in Afghanistan.

• Trump’s secretary of state, Mike Pompeo, was among the U.S. officials who met with Baradar during negotiating sessions.

• It’s too early to call Baradar the “president” of Afghanistan, since no such leadership decision has been publicly announced.

As the Taliban celebrated its rapid takeover of Afghanistan, blame for the fall of the U.S.-backed Afghan government and military ricocheted around social media.

Critics of President Joe Biden noted that he was in charge as the U.S. struggled to evacuate a flood of Americans and others who wanted to exit the country. Meanwhile, critics of President Donald Trump responded that his administration had set the endgame in motion by striking a deal with the Taliban to withdraw U.S. forces by this year.

Several posts highlighted the role of Trump’s secretary of state, Mike Pompeo, such as one on Instagram that featured a photograph along with this caption: "Guy next to @mikepompeo here in November of 2020 is the guy the Trump administration helped get out of jail in 2018 and who is now the 'president' of Afghanistan." 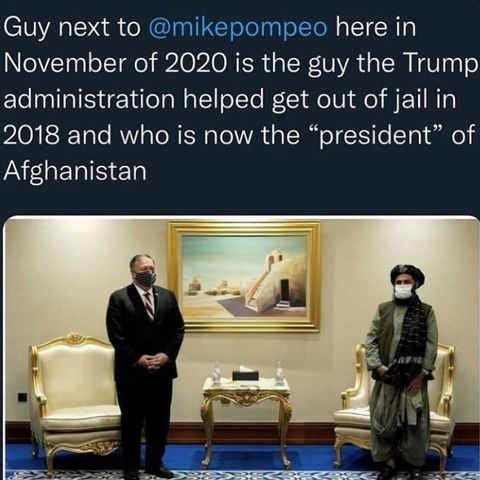 Did the Trump administration really help a top Taliban figure get out of jail? Basically yes, although it's too early to say he whether he will become leader of the Taliban’s government in Kabul.

The man pictured meeting with Pompeo in 2020 is Mullah Abdul Ghani Baradar. He was a founder of the Taliban, which led a repressive regime that ruled Afghanistan from 1996 to 2001 and provided sanctuary to al-Qaida leader Osama bin Laden.

In 2001, when the Taliban’s control of Afghanistan was weakening under pressure from a U.S.-backed offensive, Baradar tried to persuade leaders of his group to surrender. Taliban leaders rebuffed his suggestion.

In 2010, Baradar was captured by the United States and was imprisoned in Pakistan until 2018. During that time, however, officials inside and outside Afghanistan considered him one of the few Taliban leaders who they might be able to negotiate with.

In 2018, as negotiations to end the Afghanistan war were taking shape, the Trump administration urged Pakistan to release Baradar. He would become the head of the Taliban’s political office in Doha, Qatar, from which he would participate in the negotiations.

The United States’ special envoy for the talks, Zalmay Khalilzad, confirmed the U.S. role in releasing Baradar in remarks at the U.S. Institute of Peace on Feb. 8, 2019.

His release "was my request," Khalilzad said at the Institute of Peace forum. The Pakistani government "accommodated that," he said.

Joe Biden
stated on August 27, 2008 in a speech at the Democratic National Convention in Denver
Three years ago, John McCain said, "Afghanistan — we don't read about it anymore in papers because it succeeded."

Pompeo and his department made no secret about negotiating with Baradar. Using his government account, Pompeo tweeted a photograph from one of their meetings on Sept. 12, 2020, and the State Department issued a press release on the meeting, saying "Secretary Pompeo urged the Taliban to seize this opportunity to forge a political settlement and reach a comprehensive and permanent ceasefire." (The photograph in the Instagram post appears to be of a different session between the two men, on Nov. 21, 2020.)

Met with Taliban Political Deputy Mullah Beradar to welcome the launch of Afghan peace negotiations. The Taliban must seize this opportunity to forge a political settlement & reach a comprehensive & permanent ceasefire to end 40 years of war. This effort must be Afghan led. pic.twitter.com/i7AUlGsBGz

The talks produced an agreement for the U.S. to withdraw its troops by May 1, 2021. Biden largely stuck to the Trump-negotiated agreement, but delayed the deadline until Sept. 11, 2021. U.S. troops began to depart in May.

While the Wall Street Journal reported that Baradar "is the highest-ranking leader of the movement to appear in public since it took back control of Afghanistan," the newspaper added that "the Taliban haven’t said who will lead their movement, or how their government will operate."

The Washington Post referred to him as the Taliban’s "de facto leader."

News reports suggest that there’s at least one figure above Baradar in the Taliban’s organizational chart: Mullah Haibatullah Akhundzada, who has been referred to as the group’s "supreme leader." As of Aug. 17, Akhundzada had not yet emerged in public, Axios reported.

"The Taliban have not yet said who will be leading their new government, much less what the titles will be," said Laurel Miller, director of the Asia Program at the International Crisis Group, though she added that "it would not be surprising for Baradar to take up a senior position."

An Instagram post said, "Guy next to @mikepompeo here in November of 2020 is the guy the Trump administration helped get out of jail in 2018 and who is now the 'president' of Afghanistan."

As secretary of state, Pompeo tweeted a photo of himself at negotiations with Baradar, and the U.S. envoy chosen by Trump publicly confirmed that he requested Baradar’s release from prison in Pakistan.

However, it’s too early to say that Baradar will be "president" of Afghanistan, since no such decision has been publicly announced.

U.S. Institute of Peace, "Special Representative Zalmay Khalilzad on the Prospects for Peace in Afghanistan," Feb. 8, 2019

Email interview with Laurel Miller, director of the Asia Program at the International Crisis Group, Aug. 17, 2021