Warren Davidson
stated on August 17, 2021 in an interview with Breitbart:
Former President Donald Trump “was blocked from getting troops out of (Afghanistan) by Liz Cheney and others.”

The rapid fall of the Afghan government has prompted predictably partisan finger-pointing throughout Washington, as well as an unusual amount of intraparty blame.

One example of the latter is the criticism lobbed by Rep. Warren Davidson, R-Ohio, against fellow Republican Rep. Liz Cheney of Wyoming, who was already in the doghouse in her party for supporting President Donald Trump’s impeachment and an investigation of the Jan. 6 Capitol riot.

In an interview with Breitbart on Aug. 17, Davidson said that as president, Trump "was blocked from getting troops out of (Afghanistan) by Liz Cheney and others."

Davidson’s office told PolitiFact that he was referring to an amendment backed by Cheney and Democratic Rep. Jason Crow of Colorado in 2020 that he said impeded Trump’s efforts to end the war earlier and more safely.

The amendment required that, before reducing the number of troops in Afghanistan below specified levels, the executive branch needed to issue a report documenting that the troop reduction would not harm national security. A slightly modified version became law in 2020 as part of a much broader defense authorization bill.

However, the amendment did not "block" a military drawdown, in its design or its effect. 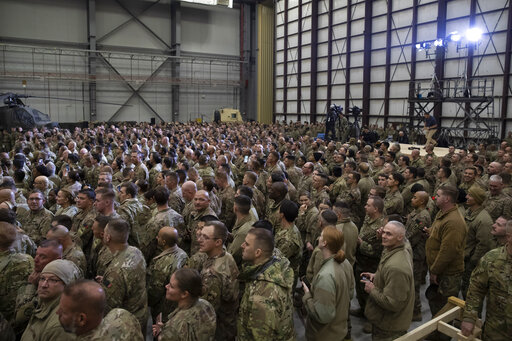 How the amendment affected U.S. withdrawal

Trump negotiated a February 2020 agreement with the Taliban that paved the way for the U.S. withdrawal completed under President Joe Biden.

Crow’s amendment didn’t block getting troops out of Afghanistan. But it did impose some noteworthy hurdles for the government to clear before it could reduce troop levels below certain thresholds.

Under the original amendment language, the U.S. government could not access funding to draw down troops until the U.S. certified that no harm would come to counterterrorism efforts in Afghanistan; that it wouldn’t pose risks to U.S. personnel; that allies would be consulted; and that the drawdown was in the United States’ best interests. The restrictions would be triggered if the administration wanted to reduce troop levels in Afghanistan below 8,000 and again if they fell below 5,000.

The amendment also allowed the defense secretary, in consultation with other military leaders, to waive these requirements through an explanation to Congress if there was "an imminent and extraordinary threat" to U.S. troops and to "the national-security interests of the United States."

The amendment was tweaked before its enactment as part of the National Defense Authorization Act. In the final version, the troop thresholds were reset to 4,000 and 2,000.

Mike Franken
stated on May 5, 2022 in a tweet
“Senator Grassley hopped off the Finance Committee, where he could be helpful to Iowa and the nation, in favor of the Judiciary Committee"

Both the amendment and the broader legislation that ultimately contained it received wide bipartisan support.

The amendment passed the House Armed Services Committee by a 45-11 vote, including 17-8 support from Republicans. The committee unanimously passed the full bill that included the amendment, 56-0.

The House passed the final version of the authorization bill 335-78, with Republicans supporting it by a 140-40 margin. Then, after Trump vetoed the bill — over issues unrelated to Afghanistan — 109 House Republicans joined a successful vote to override the veto.

While the amendment became law, the Trump administration effectively flouted it when it carried out its troop reduction.

There’s no indication that the administration ever submitted the appropriate reports before drawing down troops below the amendment’s specified levels. Yet the Trump administration at least went below the 4,000 level and was aiming to leave the Biden administration with 2,500 personnel in Afghanistan.

Davidson’s office told PolitiFact that even if the amendment didn’t "block" Trump from drawing down troop levels, it still used significant leverage by tying funding for a withdrawal to the reporting requirements. "The power of the purse is almost all the muscle that Congress has left," said Christine Ravold, Davidson's communications director.

Ravold added that Trump’s defiance of the amendment shouldn’t be used to argue that it didn’t pose a significant obstacle to troop withdrawal.

"It’s another example of the executive branch acting unilaterally without consulting Congress," she said. "This won’t be the first or last time that Congress’s war powers are trampled by the White House."

Davidson said that Trump "was blocked from getting troops out of (Afghanistan) by Liz Cheney and others."

"Blocked" is too strong a term for what the amendment was designed to do, since it allowed troop reductions to proceed as long as reports were submitted confirming the safety of U.S. forces and the protection of national security.

Moreover, Trump ignored the law: He did not produce a report as the amendment required when he began reducing troop levels.

Still, the amendment laid out robust terms before a drawdown could proceed, setting a national security requirement, and imposing terms on funding.

Summary of the Afghanistan Partnership and Transparency Act (Crow-Cheney amendment)

The Hill, "House panel votes to constrain Afghan drawdown, ask for assessment on 'incentives' to attack US troops," July 1, 2020

Stars and Stripes, "Drawdown of troops from Afghanistan still ongoing despite restrictions in new NDAA," Jan. 11, 2021