Ted Cruz
stated on January 9, 2021 in a tweet:
Said Rep. Alexandria Ocasio-Cortez and her allies “blocked a resolution condemning anti-Semitism — which I passed unanimously in the Senate.”

• Cruz’s resolution on anti-Semitism did pass unanimously in the Senate. But he offered a misleading description of Ocasio-Cortez’s actions surrounding a similar House resolution.

• Ocasio-Cortez opposed the initial draft of a House resolution, saying it ignored bigotry other than anti-Semitism, such as that exhibited by white supremacists. She voted for a revised resolution that added condemnations of other types of bigotry, and the measure passed by a wide margin.

•  Much of the House resolution was similar to the language in Cruz’s resolution.

Two high-profile members of Congress — Sen. Ted Cruz, R-Texas, and Rep. Alexandria Ocasio-Cortez, D-N.Y. — were engaged in a Twitter spat in January over blame for the Capitol riots when the topic of their exchange veered to their records on condemning anti-Semitism.

At one point in the dialogue, Ocasio-Cortez said of the Capitol rioters, "They wore Auschwitz shirts, erected gallows, and tried to hang the Vice President. Your continued excusal and denial of Wednesday’s Neo-Nazi presence is abhorrent and dangerous. The most healing and unifying thing *you* can do is take responsibility for your actions and resign."

Cruz responded, "Epic hypocrisy. Facts: 1) Nazis are evil bigots. 2) You & your anti-Israel pals blocked a resolution condemning anti-Semitism — which I passed unanimously in the Senate. 3) Unless they are genocidal, calling your political opponents Nazis is atrocious."

2) You & your anti-Israel pals blocked a resolution condemning antisemitism—which I passed unanimously in the Senate. https://t.co/kYQGO4zVVU

3) Unless they are genocidal, calling your political opponents Nazis is atrocious. https://t.co/ZV5dhUDRzD

The two continued to trade attacks over the handling of the resolutions, with Ocasio-Cortez accusing Cruz of lying and Cruz doubling down on his claim.

And we found Cruz’s version of events leaves out a lot of important context.

The rest of the tweetstorm

Their continuing Twitter thread shed light on the crux of their dispute.

Ocasio-Cortez tweeted, "@tedcruz again, you are lying. Pull the Clerk record. I proudly voted for the resolution against antisemitism you cite. Your statements are growing increasingly erratic and unfounded in fact."

Cruz fired back, "Not true. The ‘record’ you cite is the show vote on the watered-down House resolution AFTER you BLOCKED the resolution condemning antisemitism." 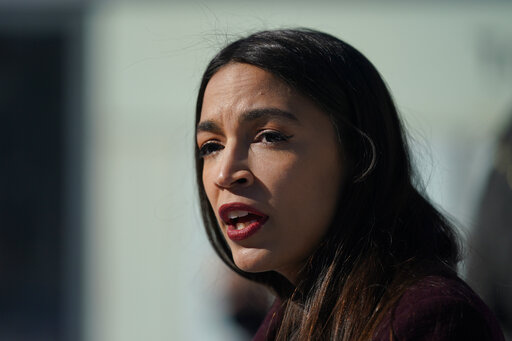 Rep. Alexandria Ocasio-Cortez, D-N.Y., speaks during a news conference in New York on Feb. 8, 2021. (AP)
Ocasio-Cortez and the House resolution

Anti-Semitism flared as an issue in Congress in March 2019, when Rep. Ilhan Omar, D-Minn. — a member of the "Squad" of left-leaning Democrats that includes Ocasio-Cortez — suggested that some lawmakers "push for allegiance to a foreign country," specifically Israel. Some said this played into longstanding anti-Semitic tropes that suggest that Jews have dual loyalties and can’t be trusted to be fully American.

Omar’s remark came during a panel discussion with a third Squad member, Rep. Rashida Tlaib of Michigan. Omar and Tlaib are both Muslim.

In response, House Democrats circulated a draft resolution titled "Rejecting anti-Semitism as hateful expressions of intolerance that are contradictory to the values that define the people of the United States."

The draft’s singular focus on anti-Semitism worried some Democratic lawmakers, including Ocasio-Cortez, who argued that the House ought to condemn other forms of bigotry as well.

"It’s not my position to tell people how to feel, or that their hurt is invalid," Ocasio-Cortez tweeted on March 5, 2019. "But incidents like these do beg the question: where are the resolutions against homophobic statements? For anti-blackness? For xenophobia? For a member saying he’ll "send Obama home to Kenya?"

As a result of the pushback by Ocasio-Cortez and her allies, the resolution ultimately voted on by the House on March 7, 2019, H. Res. 183, was broadened to include more than just anti-Semitism.

The resolution said the House condemned anti-Semitism as well as anti-Muslim discrimination and bigotry against minorities "as hateful expressions of intolerance that are contradictory to the values and aspirations that define the people of the United States."

The resolution included roughly 30 uses of the words "Jews," "Jewish," or "anti-Semitism," so it remained heavily critical of anti-Jewish sentiments and acts. It also criticized "white supremacists" for exploiting "bigotry and weaponiz(ing) hate for political gain, targeting traditionally persecuted peoples, including African Americans, Latinos, Native Americans, Asian Americans and Pacific Islanders and other people of color, Jews, Muslims, Hindus, Sikhs, the LGBTQ community, immigrants, and others with verbal attacks, incitement, and violence."

The resolution passed in the House, 407-23, with Ocasio-Cortez, Omar and Tlaib all voting in favor. The only votes against it were by Republicans.

Cruz and the Senate resolution

The "sense of the Senate" resolution, S. Res. 189, said in part that the Senate "condemns and commits to combatting all forms of anti-Semitism." In a speech on the Senate floor, Cruz said the resolution "speaks to prejudices Jews experience which we must acknowledge." Afterward, he asked that the resolution be passed by unanimous consent. Since no senator objected, the resolution was deemed to be passed unanimously.

Cruz said that Ocasio-Cortez and her allies "blocked a resolution condemning anti-Semitism — which I passed unanimously in the Senate."

Cruz sponsored a Senate resolution  against anti-Semitism that passed by unanimous consent. But his claim that Ocasio-Cortez’ blocked a similar House resolution leaves out important context.

Ocasio-Cortez opposed the initial resolution draft as being too narrow. Once condemnations of other types of bigotry were added to the text, the resolution went forward and passed easily, including a vote in favor by Ocasio-Cortez. Both resolutions had similar language on anti-Semitism.

EDITOR'S NOTE, March 24, 2021: After we published our report, Cruz's staff responded to our inquiry, citing evidence we had already reviewed. The rating remains unchanged.

Clarence McNeill
stated on April 7, 2021 an email to students:
The use and possession of marijuana on U.S. college campuses “remains prohibited under federal law”

Ted Cruz
stated on January 9, 2021 a tweet:
Said Rep. Alexandria Ocasio-Cortez and her allies “blocked a resolution condemning anti-Semitism — which I passed unanimously in the Senate.”