Bill Cassidy
stated on February 7, 2021 in remarks on NBC's "Meet the Press":
“New York, for all of their complaining, Gov. Cuomo's complaining, has only had a 1.5% decrease in revenue” due to the coronavirus pandemic.

• New York State saw its revenue decline by 1.5% during calendar year 2020. But its fiscal year runs from April to March.

How has New York state fared in collecting revenue during the coronavirus pandemic and the resulting economic turmoil?

Not so badly, according to Sen. Bill Cassidy, R-La., who said recently that New York Gov. Andrew M. Cuomo has been exaggerating the fiscal hit to his state.

In a Feb. 7 interview with NBC’s Chuck Todd on "Meet the Press on Feb. 7, Cassidy was asked about what actions the Senate needs to take to help state and local governments experiencing fiscal shortfalls in the wake of the pandemic.

Cassidy acknowledged that some states have faced budgetary difficulties, but said others have not, including Democratic-run states such as New York. "New York, for all of their complaining, Gov. Cuomo's complaining, has only had a 1.5% decrease in revenue," Cassidy said.

The remarks came amid skirmishing between the parties over President Joe Biden’s proposed $1.9 trillion American Rescue Plan. The bill is designed to boost the response to the coronavirus pandemic and aid the economic recovery.

Biden’s proposal envisioned $350 billion in state and local government aid, but many Republicans have been skeptical of aiding cities and states without more conditions. 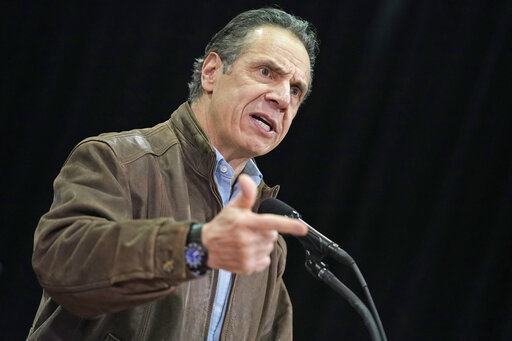 Has New York’s fiscal hit really been that modest?

Ty Bofferding, Cassidy’s director of communications, pointed to a report by the financial institution J.P. Morgan that showed that in the calendar year 2020, New York had an aggregate tax revenue decline of 1.5% compared with 2019.

While Cuomo’s administration did not dispute the 1.5% figure, they argue that the calendar year figures are less useful for tracking the pandemic’s budgetary impact than the fiscal year figures, which run from April 1 through March 31. In 2020, January, February and part of March occurred before the pandemic hit.

Viral image
stated on November 10, 2022 in an Instagram post
A New York election results map is evidence of fraud.

"Comparing calendar years, as the chart the senator is referencing does, fails to recognize the impact of the pandemic on state revenues," said Freeman Klopott, a spokesman for the New York state Division of the Budget. "Almost the entirety of the first quarter of the calendar year 2020 was un-impacted by the pandemic and growing robustly."

In other words, the state argues, the calendar-year totals undercount the fiscal harm from the pandemic.

"Unlike the federal government, New York State must balance its budget, and it must do it on a fiscal year basis," Klopott said. "We can’t change the timing."

The J.P. Morgan report, which focused on advice to investors in municipal bonds, cautioned that its conclusions are "based on the current data, and are not indicative of future revenues, particularly given the uncertainties on the progress of the pandemic."

A baseline budget from January 2020 projected state revenue of $87.9 billion for the year ending March 31, 2021, said Laura Schultz, executive director of research at the State University of New York’s Rockefeller Institute of Government.

But by April 2020, after the impact of the pandemic started to become clear, the state revised its projection to $77.7 billion. That would be an 11.6% decline from the earlier projection, and a 6.2% drop from what was collected in the previous fiscal year.

Those numbers are significantly larger than the 1.5% decrease, though final revenue figures won’t be available until after the end of the fiscal year.

Cassidy said that "New York, for all of their complaining, Gov. Cuomo's complaining, has only had a 1.5% decrease in revenue" due to the pandemic.

New York state saw revenue decline by 1.5% in calendar year 2020. However, the state’s budget is based on a fiscal year that runs from April 1 to March 31, and the calendar year figure Cassidy cited includes nearly three months of relatively normal, pre-pandemic economic activity.

This makes it a misleading indicator of the pandemic’s budgetary impact. In fact, state budget officials have already projected larger revenue declines for the full fiscal year.

Lorraine Lewandrowski
stated on February 24, 2021 a hearing of the New York Senate Agriculture Committee:
It’s not currently “legal for a New York state student to have a glass of fresh whole milk.”

Bill Cassidy
stated on February 7, 2021 remarks on NBC's "Meet the Press":
“New York, for all of their complaining, Gov. Cuomo's complaining, has only had a 1.5% decrease in revenue” due to the coronavirus pandemic.

Stefan Mychajliw
stated on January 29, 2021 a press release:
"The (Erie Co., N.Y.) health commissioner makes more than the governor, the vice president of the United States, and has a salary that is comparable to Dr. Anthony Fauci.”

Monica Wallace
stated on June 8, 2020 a newspaper interview:
Significantly more people died of Covid-19 in two months than died of overdoses all of last year or the year before.

Kirsten Gillibrand
stated on April 21, 2020 a tweet:
“Immigrants make up a majority of essential workers in places like New York City.”