Facebook posts
stated on January 13, 2021 in a Facebook post:
Photo shows Rep. Lauren Boebert with Capitol rioters before she gave them a tour of the building "one day before the insurrection."

U.S. Rep. Lauren Boebert, R-Colo., spent her first weeks in Congress arguing against the House impeachment vote against President Donald Trump, making false claims about the presidential election, objecting to new metal detectors in front of House chambers, and insisting that she could carry her handgun around the Capitol.

But there are some false claims being spread about the freshman congresswoman, too.

In the days following the Capitol raid, viral captions have been shared alongside a photo featuring Boebert that claim it shows some of the rioters and was taken the day before the attack.

"Congresswoman Lauren Boebert took this group on a guided tour of the Capitol one day before the insurrection. Three of the people participated and knew exactly where to go…" one post reads. 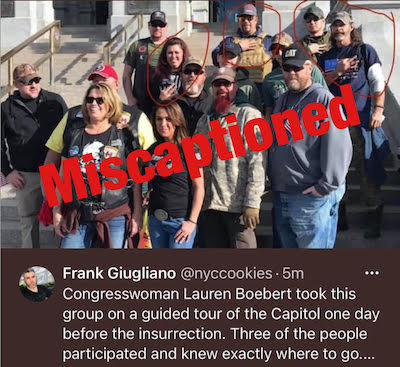 But the image wasn’t taken on the steps of the U.S. Capitol in January 2021. It dates back to December 2019 and was captured outside of the Colorado State Capitol.

The image first appeared in a Dec. 9, 2019, Colorado Times Recorder story about a rally against the state’s "red flag" law, which allows guns to be taken from people deemed a threat to themselves or others.

The newspaper reported that Boebert attended the event and had just launched her campaign for Congress.

"Organizers of the ‘We Will Not Comply’ rally included Rally For Our Rights activist Lesley Hollywood, conservative Facebook personality Sheronna Bishop, and gun rights activist Lauren Boebert, who just launched her campaign for Colorado’s Third Congressional District, where she will challenge incumbent U.S. Rep. Scott Tipton in the Republican primary," the Times Recorder wrote.

In the image, Boebert is standing with members of the "Bikers for Trump" group, as well as "American Patriots II%," which is listed as an anti-government extremist group by the Southern Poverty Law Center. Some people in the photograph appear to be displaying a white supremacist symbol.

Facebook posts claim a photo of Boebert shows her standing with Capitol rioters before she gave them a tour of the building "one day before the insurrection."

This isn’t accurate. Boebert is seen with members of an extremist group in the image, but it wasn’t taken recently, or on the steps of the U.S. Capitol. It’s from a December 2019 rally at Colorado’s Capitol.

Colorado Times Recorder, Colorado Legislators Joined Extremist Groups for a "We Will Not Comply" Rally Against Red Flag Law, Dec. 9, 2019