Facebook posts
stated on June 30, 2021 in a Facebook post:
News organizations and sponsors ignored the accomplishments of Kim Rhode, a six-time Olympic medalist, because of her support of the Second Amendment.

With the delayed 2020 Tokyo Olympic Games around the corner, an old claim has resurfaced online about Kim Rhode, a six-time Olympic medalist in the sport of shooting.

"First woman to medal in six straight olympics," a June 30 Facebook post says. "Media and sponsors ignore her because she is outspoken pro-2A." 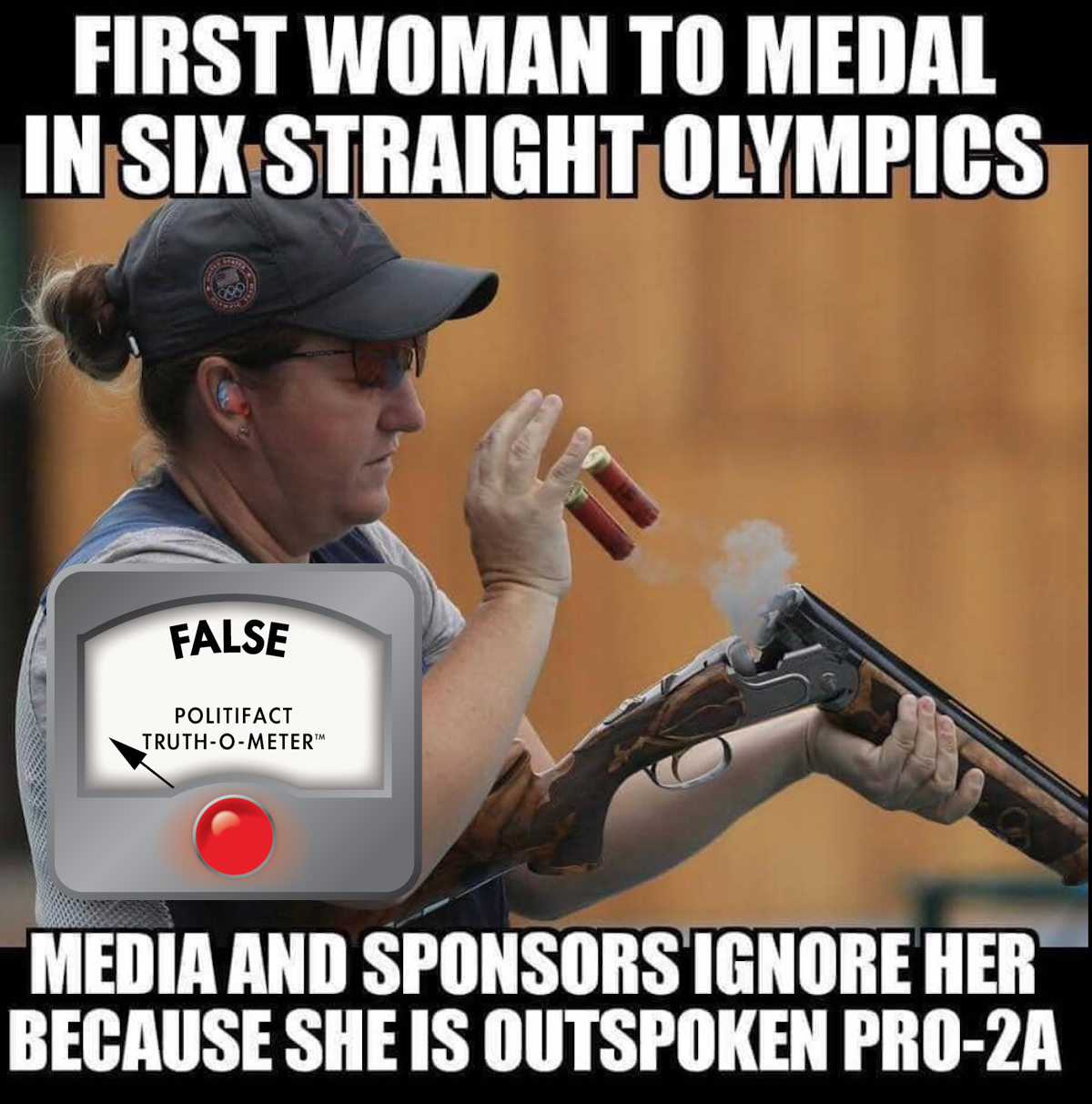 The claim first started to spread online in 2016, shortly after Rhode won her sixth medal for women’s skeet shooting. It’s just as wrong now as it was then.

After her bronze medal win in 2016, Rhode became the first woman and first summer Olympian to medal in six consecutive Olympics. She didn’t qualify for the 2020 games.

Stories about the feat were published by multiple news organizations at the time, including CBS Sports, the Daily Mail, The Guardian, NBC, the New York Times, Reuters, SB Nation and USA Today. Outlets have also reported about her accomplishments and support of gun rights.

It’s true that, in the past, Rhode hasn’t received sponsorships outside of the firearms industry and a hunters’ conservation group. But that appears to have more to do with shooting’s lack of fanfare compared to other Olympic sports, making it unattractive to big-name sponsors.

Shooters, including Rhode, have also suggested that the rise of gun violence and mass shootings in the U.S. has attached a stigma to the sport, and contributes to its sponsorship problems.

"When you look at the gun debate and the Olympics, there definitely is that stigmatism that’s attached to our sport due to all the negative publicity that guns get," Rhode told the Daily Signal in 2016.

A Facebook post claims that Rhode was ignored by news organizations and sponsors because she’s an outspoken supporter of the Second Amendment.

There is no evidence to support this. Several prominent news outlets have reported about Rhode’s Olympic accomplishments, as well as her support of gun rights. The sport of shooting often receives less big-name sponsors due to its lack of fanfare, and isn’t about Rhode specifically. She and other shooters have also suggested that the sponsorship issues may be due to an aversion to gun sports.

Bloomberg, Olympics Sponsors want nothing to do with Team USA Shooters, Aug. 12, 2016

Facebook posts
stated on April 13, 2022 a Facebook post:
“Leftist justice reform” is the reason that the NYC subway shooting suspect wasn’t in jail at the time of the attack.