Dr. Anthony Fauci, director of the National Institute of Allergy and Infectious Diseases, listens during a Senate Appropriations Subcommittee, Wednesday, May 26, 2021, on Capitol Hill in Washington. (AP)

The release of thousands of emails sent and received by Dr. Anthony Fauci during the onset of the pandemic has provided new fuel for online misinformation.

A Facebook post from June 2 claims Fauci knew about hydroxychloroquine’s effectiveness against COVID -19. The post is an image of distorted text that is also copied word-for-word in the caption.

"So he (knew) hydroxychloroquine worked … emailed friends about it being effective," it reads.

It then goes on to say the drug should be placed in every shop so that people can "get on with life and pretend this (pandemic) never happened." 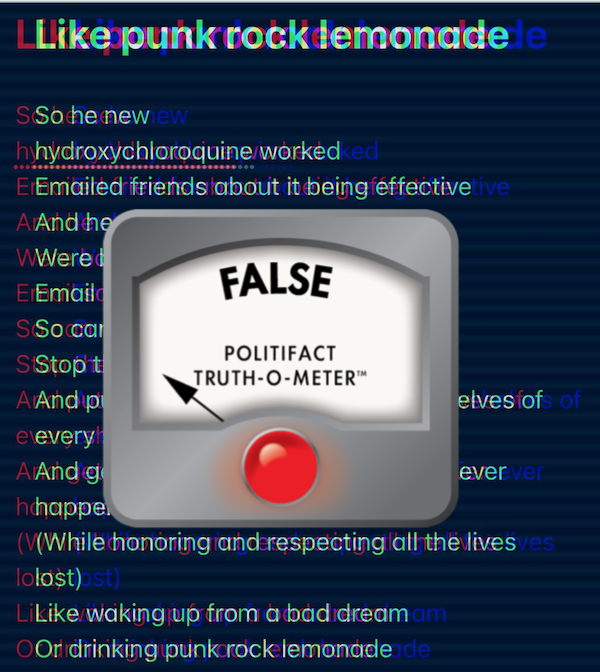 (Screenshot from Facebook)
While no specific emails were mentioned in the Facebook post, it is seemingly in reference to the release of more than 3,200 messages sent or received by Fauci from the first half of 2020. The emails were obtained by BuzzFeed and the Washington Post through a Freedom of Information Act request and made public in separate reports published on June 1.
Hydroxychloroquine is specifically mentioned nearly three-dozen times, usually in the form of someone asking the National Institute of Allergy and Infectious Diseases director for his thoughts on the drug, which is typically used to treat lupus, rheumatoid arthritis and malaria.
The earliest mention was from an exchange Fauci had on Feb. 24, 2020, with a pharmacologist at the federal Food and Drug Administration asking him if there was any proof to back up a claim from China on hydroxychloroquine being able to "decrease COVID-19 infections and lung disease."
"There are no data in this brief report and so I have no way of evaluating their claim. There are a lot of these types of claims going around. I would love to see their data," Fauci responded.
The next mention of hydroxychloroquine in the email dump occurred April 11, 2020, when Rep. Fred Upton, R-Mich., asked whether there were any cases of lupus patients contracting COVID-19.
"The answer is almost certainly yes, but there would not be enough of them whereby we can compare the results in those who were receiving hydroxychloroquine or not for their lupus," Fauci responded. "Large natural history studies, which we will be initiating, could possibly answer that question."
In other emails asking about the drug, Fauci did acknowledge there were anecdotal accounts about hydroxychloroquine’s effectiveness but said he was waiting on results from a then-ongoing clinical trial conducted by the National Institutes of Health looking into whether the drug could be used as a treatment for COVID-19.
"We will know soon whether hydroxychloroquine has any beneficial effects as the results of randomized, controlled trials become available," he said in one email sent May 1, 2020.
At no point in any of the emails sent by Fauci did he say himself that hydroxychloroquine was an effective treatment. However, around the time of the emails, then-President Donald Trump was touting its alleged benefits.
Fauci’s emails echo past statements he’s made publicly about the drug, acknowledging the anecdotal evidence but withholding any official position until a clinical trial is completed.
The study conducted by the NIH was eventually halted in June 2020 after it found hydroxychloroquine was "very unlikely to be beneficial to hospitalized patients with COVID-19."
"The data from this study indicate that this drug provided no additional benefit compared to placebo control for the treatment of COVID-19 in hospitalized patients," according to a statement from the NIH.
At the same time, the FDA revoked the emergency use authorization it had issued for the drug  three months prior. In addition to the NIH study finding no benefit to taking hydroxychloroquine, the FDA said taking the drug could potentially lead to serious side effects including "serious cardiac adverse events" and that any potential benefits "no longer outweigh the known and potential risks."
Misinformation attempting to connect Fauci and his knowledge about hydroxychloroquine is not new. PolitiFact previously debunked a claim in 2020 alleging he knew as early as 2005 the drug was capable of treating coronaviruses like the one that causes COVID-19 and actively advocated against its use.
The Facebook post also claims Fauci knew face masks did not work to stop the virus, which we rated False.
Our ruling

A Facebook post claims Fauci knew about hydroxychloroquine's ability to treat people with COVID-19, referencing emails from the health director obtained by BuzzFeed and the Washington Post.

However, those emails do not show him acknowledging its effectiveness. Instead, it shows him aware of claims being made by other people about the drug and that he’s waiting on the results of a study being conducted on hydroxychloroquine as a possible treatment for COVID-19.

The study was eventually halted after researchers concluded the drug offered no additional benefit for treating the virus.

Washington Post, "Anthony Fauci’s pandemic emails: ‘All is well despite some crazy people in this world,’" June 1, 2021

Buzzfeed, "Anthony Fauci’s Emails Reveal The Pressure That Fell On One Man," June 1, 2021

National Institutes of Health, "NIH begins clinical trial of hydroxychloroquine and azithromycin to treat COVID-19," May 14, 2020

Facebook posts
stated on January 6, 2022 a Facebook post:
Says Joe Biden said “dozens of police were killed” during the Jan. 6 attack on the U.S. Capitol but “exactly zero people” died that day.

Bloggers
stated on November 22, 2021 a video:
The COVID-19 vaccines "suppress the immune system" and make people more susceptible to HIV, shingles and herpes.

Facebook posts
stated on September 15, 2021 a Facebook post:
A "Liability Warning Acknowledgement Form" allows a worker to sue their company if they get injured from the COVID-19 vaccine.