In the days before Memorial Day, Facebook users took to their feeds to express their outrage that U.S. Rep. Maxine Waters wanted to rename Memorial Day to "George Floyd Day."

We found multiple posts on social media claiming that Waters, a Democrat from California, had introduced a bill to Congress proposing that the holiday’s name be changed.

"Maxine Waters just introduced a bill to re-name Memorial Day — George Floyd Day. Are you FRICK’N kidding me?" one user posted on May 26. 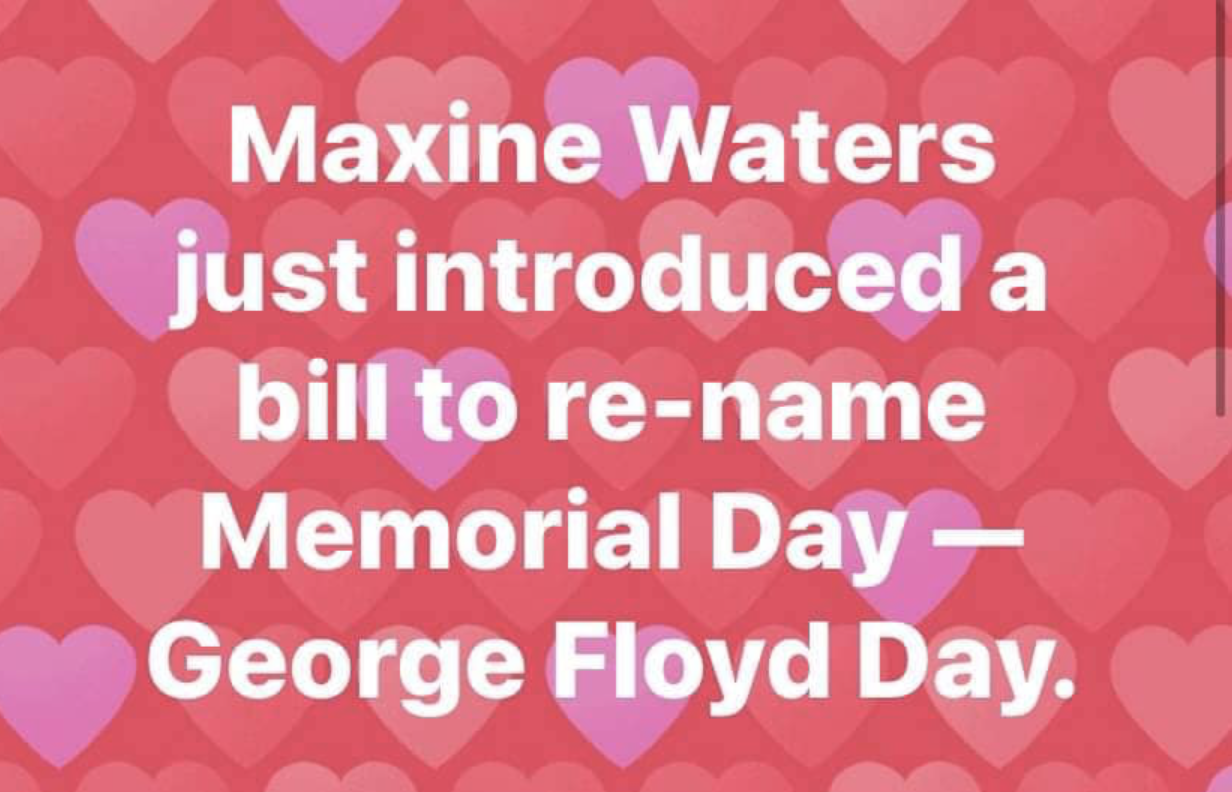 That particular post was shared more than 90 times, and the claim that Waters wrote a bill to rename Memorial Day has gone viral on Facebook — we’ve also seen it pop up on Twitter.

Facebook users flagged the post through the company's effort to combat false news and misinformation on its News Feed. (Read more about PolitiFact California’s partnership with Facebook.)

Waters did not introduce a bill to Congress to change Memorial Day to "George Floyd Day."

We reached out to the Congresswoman’s office both by email and by phone more than five times, but did not receive a response.

We looked at all of the bills that Waters has sponsored or co-sponsored on the United States Congress website. There is no record of her proposing legislation to create a "George Floyd Day," nor is there a bill anywhere else in the Congressional Record.

In February, Waters co-sponsored the George Floyd Justice in Policing Act of 2021, which passed the House in March. But nowhere in that bill is it proposed that Memorial Day be changed to "George Floyd Day."

No media outlet has covered a proposal by Waters to change Memorial Day to "George Floyd Day," further confirming that this claim is not grounded in reality.

Waters has sponsored a handful of bills in recent months, including legislation that would "provide remedy for survivors and descendants of the victims of the Tulsa, Oklahoma Race Massacre of 192." However, the California Congresswoman did not introduce or sponsor any sort of legislation proposing that Memorial Day be renamed in honor of George Floyd.

We looked at all of the bills that Waters has sponsored or co-sponsored so far this year and found nothing proposing that Memorial Day be changed to George Floyd Day. Furthermore, we couldn’t find a single media outlet reporting that Waters proposed renaming Memorial Day.

Waters co-sponsored the George Floyd Justice in Policing Act of 2021, but that bill does not propose renaming Memorial Day after Floyd.

We rate this statement as Pants on Fire.

Library of Congress. "H.R.3466 - To provide a remedy for survivors and descendants of the victims of the Tulsa, Oklahoma Race Massacre of 1921." United States Congress. Accessed 4 Jun 2021.

Facebook posts
stated on October 1, 2021 a Facebook post:
“There are now 56 cargo freighters anchored off the coast of California from Oakland to Long Beach in what can only be considered a manufactured supply-chain halt.”

Election Integrity Project California
stated on June 22, 2021 a headline:
"California Has 1.8M More Registered Voters Than It Should”