Rodney Davis
stated on June 21, 2021 in a press release:
“Prairie State power plant is the cleanest coal-fired power plant in the nation.”

As Republican operatives were dropping U.S. Rep. Rodney Davis's name as the next potential rival to run against Gov. J.B. Pritzker, the GOP congressman was in southern Illinois visiting a coal plant that could get shut down if the governor gets his way.

Davis used the visit to criticize the governor’s support for a sweeping energy plan that could shutter every coal-fired power plant in Illinois by 2035, an idea many opponents lambast as one that will kill jobs and hike rates.

Davis called on Pritzker, a Democrat, to spare the Prairie State Energy Campus in Marissa, located south of East St. Louis. The plant provides power to municipalities in eight states, including a swath of Davis’ 13th Congressional District.

"The municipally owned Prairie State power plant is the cleanest coal-fired power plant in the nation," he said during his June 18 visit. "The company is actively pursuing and adopting additional carbon sequestration and storage and emissions-reducing technologies, and they should receive support from state and federal agencies for their efforts."

One of Prairie State Energy Campus’ two power units was selected in 2019 as the site of a U.S. Department of Energy-backed carbon capture research project slated for completion at the end of 2021. But federal data show the plant has been one of the nation’s 10 biggest emitters of heat-trapping carbon dioxide, a fact recently highlighted by the Chicago Sun-Times and Chicago Tribune.

While experts say there are multiple ways to evaluate which coal plants are the "cleanest" beyond total CO2 emissions — which tend to single out the power plants producing the most electricity — Prairie State ranked nowhere near the top based on any of the yardsticks we found to measure it.

Davis’ office did not respond to calls or emails requesting comment.

Not the ‘cleanest’ by any major metric

Defining how "clean" a coal plant is depends on whom you ask — and when, according to experts.

"‘Clean coal’ has been this sort of amorphous term that has meant whatever people want it to mean, and it's changed over time," said Daniel Cohan, a professor of civil and environmental engineering at Rice University.

Before climate change gained significant attention, Cohan and other experts said, coal plants were generally judged by their emission of regulated air pollutants causing smog and acid rain such as nitrogen oxides (NOx) and sulfur dioxide (SO2).

Amid growing concern over climate change, however, experts said there’s a case for including CO2 emissions in the conversation about which plants are the "cleanest."

To compare Prairie State’s emissions against other power plants, Cohan pointed us to data published by the U.S. Environmental Protection Agency showing how much of a given gas or pollutant power plants emit per unit of electricity they generate.

In 2019, the latest year for which this data was available, Prairie State Generating Station ranked 169th of 306 coal plants in the nation with EPA data for CO2 emission rates. Its ranking for its SO2 emission rate was roughly the same.

Prairie State performed better when it came to its NOx emission rate — placing 37th — but still nowhere near the top. 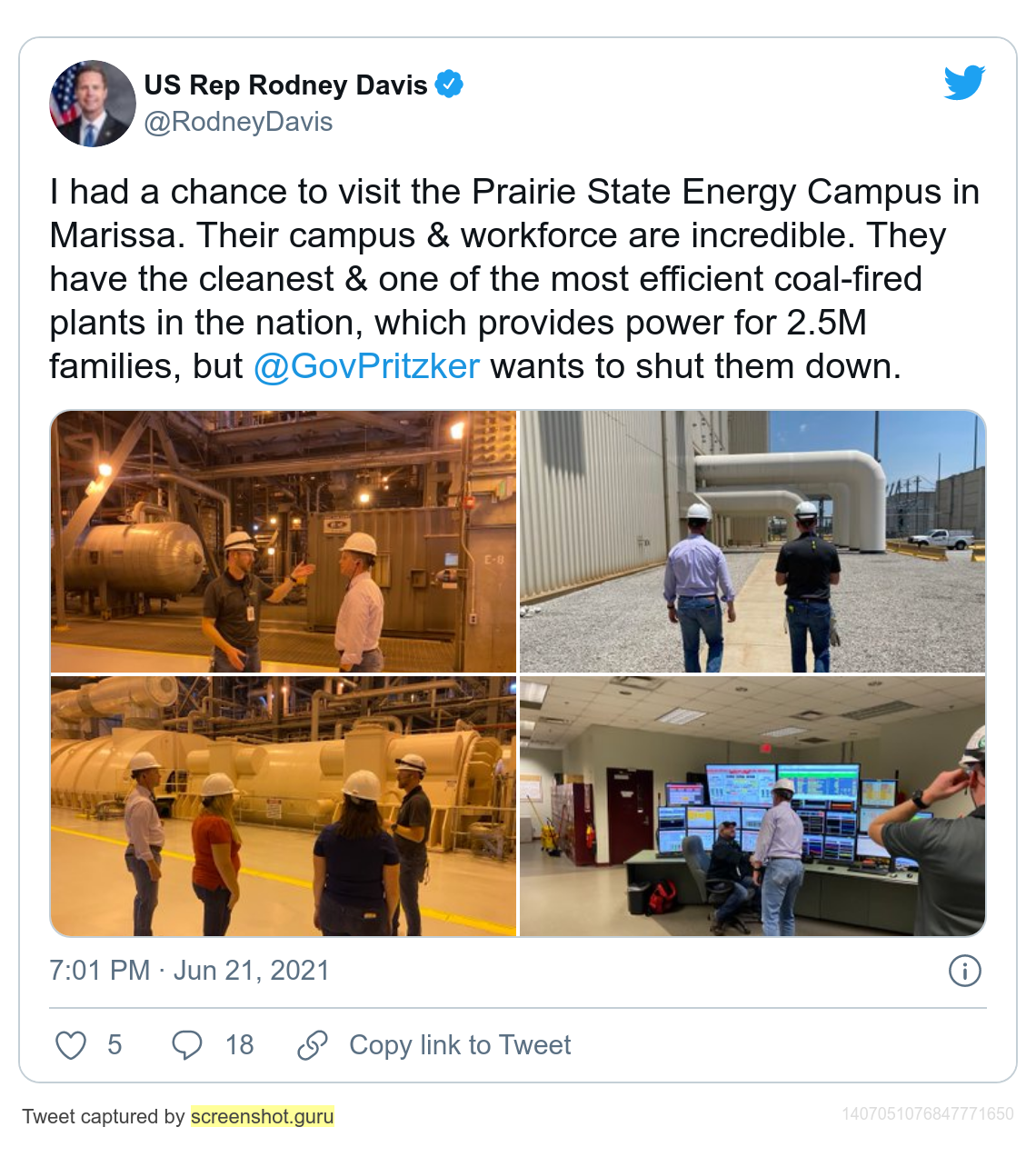 "By no means is this a clean power plant," Cohan said, referencing the EPA data. "It’s still a substantial contributor to air pollution and climate change."

Calling Prairie State the cleanest coal plant in the country, he added, "would be absurd."

Emily Grubert, an energy systems researcher and professor at Georgia Tech, agreed. "It’s not the cleanest by any reasonable metric," she said.

His office did not respond to our inquiry asking for evidence to back that up.

Experts told us there are multiple metrics by which to assess how "clean" a coal plant is, but federal data shows Prairie State does not come out at or near the top on any of them.

PANTS ON FIRE — The statement is not accurate and makes a ridiculous claim.

"Rodney Davis for governor? It sounds more possible by the day," The Pantagraph, June 23, 2021

"Senate adjourns with no energy deal, but Harmon ‘confident’ one is still near," Capitol News Illinois, June 15, 2021

"Closing Illinois coal plant would cut pollution but cost some towns that have a stake in it," Chicago Sun-Times, June 4, 2021