Thom Tillis
stated on March 10, 2021 in a committee meeting:
Says a lack of transparency for small-dollar donations is the “same thing” as dark money

North Carolina’s junior senator made national headlines this week for suggesting that different types of campaign donations have the same level of influence over elections.

Republican Thom Tillis offered comments during a March 10 committee meeting on the influence of money in federal judicial races, The Hill reported.

Tillis noted that while donors who give large amounts to certain political committees have their identities concealed, so do people who donate small amounts to candidates. Video of the full meeting is on C-SPAN’s website. (Tillis starts talking around the one hour and 25-minute mark.)

Here’s part of what he said.

"We’re talking about dark money ... In the weekend after the untimely death of Justice Ginsburg, my opponent through his campaign account raised $6 million over 48 hours. And that comes from a new tool that we have which I’ll call ‘Dem-money.’ That’s aggregation tools that give $50, $200, $250 below any sort of reporting limit that are doing the same thing.

I don’t hear anybody on the Democrats’ side saying they want to get rid of those tools. So they’re not suggesting a disarmament of both sides. They’ve simply found another way to do exactly the same thing: people providing money to candidates and influencing elections."

Is it true that small, aggregated donations are "exactly the same" as big dark money donations? Experts say this is an oversimplification.

Tillis is incorrect in saying the identities of people making small donations are kept secret. It’s also a stretch to suggest a small-dollar donor can influence elections and candidates in the same way that a large, dark-money donor can.

"They’re as far apart as they can be within the same category. It’s less apples and oranges and more oranges and kumquats," said Brendan Quinn, outreach and social media manager for the nonprofit Center for Responsive Politics, which tracks election spending.

Tillis has a point in one regard. There are some types of political donations for which laws don’t require the identity of the donor to be disclosed. Here’s an explanation.

Donations to certain groups: The term "dark money" typically refers to political spending where the source of funds is unknown. Typically this spending is done by 501(c) nonprofits. Laws don’t require these groups to disclose the names of their donors, and there’s often no limit to how much a donor can give.

Some of the biggest spending by these groups happens through donations to super PACs, which operate as independent expenditure-only committees and are not allowed to directly coordinate with candidates they support. While super PACs are required to disclose their donors, some nonprofits and shell companies can legally give unlimited amounts of money to those super PACs without having to tell the public where those funds came from.

The Center for Responsive Politics (CRP) reports that dark money accounted for $750 million in spending during the 2020 election. Meanwhile, fully transparent donations accounted for only 30% of all outside spending, which the center says is an all-time low.

Donations to candidates: Candidates are required to disclose the identity of most of their donors. This includes people or businesses that donate things besides money, such as food or event venues.

However, federal and state laws don’t require the same level of transparency for the smallest donations. At the federal level, candidates for Congress and the presidency are required to disclose the names of people who donate $200 or more. At the state level, rules for donation disclosures vary.

Small-donor disclosure laws for each state are available on a map created by The National Institute for Money in Politics, a nonprofit group advocating for election transparency. Florida and Michigan have the strictest laws, requiring disclosures for donations of any size. North Carolina is also on the stricter end of the spectrum, requiring candidates to disclose donations of more than $50. New Jersey and Nebraska have looser rules, requiring information only on those who donate more than $300 or $250, respectively.

If you donate $20 to a candidate, that candidate may not disclose your name or address in his campaign finance reports. However, if that candidate uses an "intermediary or conduit" to collect donations, that company will list your name in its report.

Popular intermediaries are ActBlue for Democrats and WinRed for Republicans. (Tillis was likely referring to ActBlue when he mentioned "Dem-money.") While each group is classified as a political action committee by the Federal Election Commission, they have other accounts that serve only to facilitate donations.

In other words, ActBlue and WinRed are middle-man platforms that provide a service like PayPal does for online purchases. Some pundits and politicians have gotten these facts wrong.

When it comes to small-dollar donations, experts told PolitiFact that Tillis’s statement is wrong on at least two fronts.

1. It’s inaccurate for Tillis to suggest the identities of small-time donors remain hidden. While candidates don’t reveal those donors’ names, their processing companies do.

For a look at how these donations are reported, check out this 2020 report from presidential candidate Bernie Sanders or this report for Democrat Cal Cunningham, who Tillis mentioned in his speech. 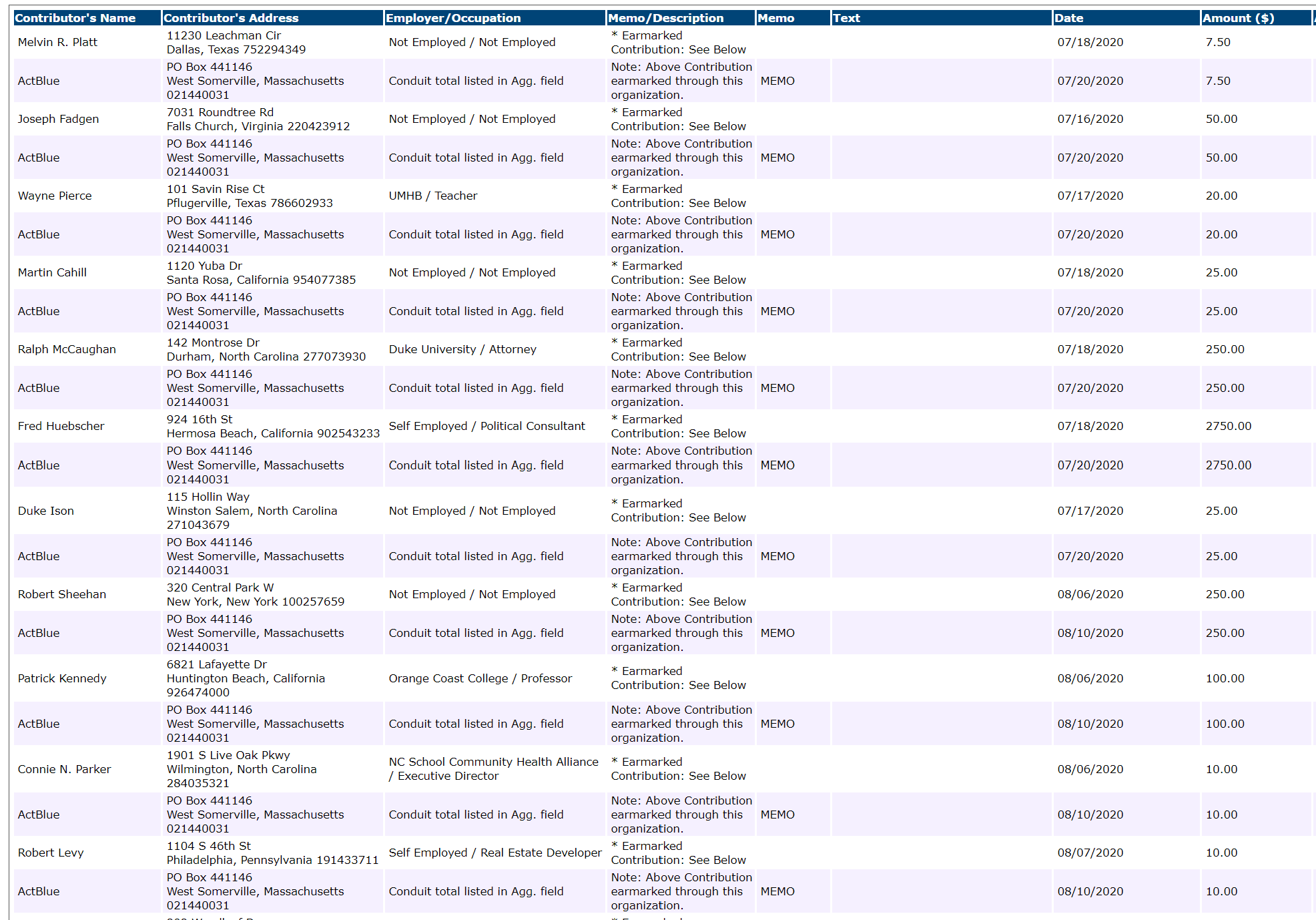 Donations made through ActBlue will show up on two lines of the report. On one line, the report lists the donor’s name and contribution. On the line below that, the report shows ActBlue’s name, its status as a "conduit," and then the disclaimer: "Above Contribution earmarked through this organization."

"Contributions from small donors through the ActBlue and WinRed platforms are not the same thing as 'dark money,' in that they are disclosed by those platforms regardless of how small by law," said Pete Quist, research director for the National Institute on Money in Politics.

"Sen. Tillis is wrong," said Michael J. Malbin, professor of political science at the Rockefeller College of Public Affairs and Policy. "His statement that candidates do not have to disclose their donors until they give an aggregate of more than $200 is correct, but ActBlue itself discloses all of the contributions for which it is the conduit -- no matter how small."

No donor who gives $25 or $75 to a candidate is going to get special attention from that candidate. But a "dark money" advertising push worth millions is inevitably going to attract attention, even if the donor’s identity isn’t disclosed.

A 2014 study by researchers at Ohio State University’s College of Law found that, even if candidates didn’t always agree with the position of corporations that fund dark money political groups, candidates were keenly aware of the group’s spending and presence in the political landscape.

"Members of Congress see independent spending as a threat – usually implicit but sometimes explicit – for those who refuse to toe the line of outside groups," the Ohio State researchers wrote in their executive summary.

Other issues with framing

The scale of the spending is different, too.

Small donations accounted for 26% of all donations in the 2020 federal elections, according to a joint study by the Center for Responsive Politics and the National Institute on Money in Politics.

When it comes to these small-dollar donations, Tillis at one point said liberals are raising "10 to 20 fold what conservative candidates do."

Experts say it’s also misleading for Tillis to suggest that Democrats dominate small-dollar donations or that Republicans have an advantage on large-dollar dark money donations.

In the 2020 election, the CRP found that Republican candidates for House received a higher percentage of small-dollar donations than Democratic candidates did. Meanwhile, the center also found that liberals benefited more from dark money than conservatives.

Tillis’ office didn’t respond to emails from PolitiFact asking for further explanation of his March 10 comments.

While talking about dark money, Tillis said small donations through aggregation tools are the "same thing" as anonymous donations to political groups.

This is misleading. While it’s true that some types of political donations aren’t reported, it’s inaccurate to say the names of people who donate through aggregators -- a type of donation that Tillis specifically mentioned -- aren’t reported. They are.

Beyond that, experts say it’s wrong to compare the influence of a small donor with those of deep-pocketed outside interests, since the scale of the latter’s donations will carry far more weight with the candidate.

Tillis’ statement contains an element of truth but ignores critical facts that would give a different impression. We rate it Mostly False.

Map of campaign finance disclosure laws by state created by The National Institute for Money in Politics.

Report by the Center for Responsive Politics and the National Institute for Money in Politics, "Joint report reveals record donations in 2020 state and federal races," posted Dec. 22, 2020.

Telephone and email interviews with Brendan Quinn, outreach and social media manager for the nonprofit Center for Responsive Politics.

Email interview with Pete Quist, research director for the National Institute on Money in Politics.

Email interview with Michael J. Malbin, professor of political science at the Rockefeller College of Public Affairs and Policy.