Six of those killed were of Asian descent, and many have speculated that the rampage was racially motivated. But as details about the shooting continue to unfold, it appears that some on social media are reaching conclusions based on what looks like a Facebook post made by Long. A screenshot of the post displays Long’s name and reads:

"China is engaged in a COVID coverup. They blocked our investigators from going to their lab in Wuhan and finding the truth about the experiments they were conducting there. If they're innocent, why block? China must be hiding something. They know how the Wuhan virus was created, and killing 500000 Americans was just part of their plan to secure global domination for the 21st century. ALL AMERICANS NEED TO FIGHT BACK AGAINST CHINA, NOW. REPUBLICANS, DEMOCRATS, WE ALL NEED TO STAND AGAINST CHINA, THE GREATEST EVIL OF OUR TIME." 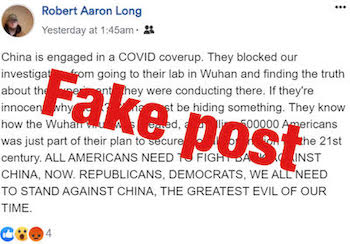 This isn’t a legitimate post from Long. While the origins of the screenshot aren’t known, we do know that the post was manufactured using an online tool and didn’t come from an authentic Facebook account.

The first sign that the post is fake is the color of Long’s name in the screenshot. It appears in blue lettering, and while that was the previous style for Facebook profile names, it no longer is. All names are now in black.

Another indicator is the positioning of the profile picture and the reactions graphics. Both are not aligned. 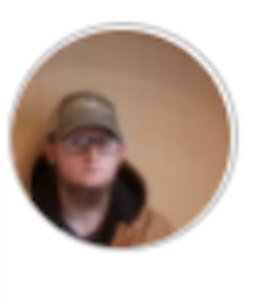 We found several websites that help people create fake Facebook posts that still use the old style of blue letters for names. These free generators offer a range of customizable options for the posts including the name, profile picture, message, time, reactions and more.

"We’ve confirmed that these screenshots are fake and we’re removing them from the platform for violating our policies," company spokesperson Sally Aldous said.

CNN, What we know about Robert Aaron Long, the suspect in Atlanta spa shootings, March 17, 2021