Facebook posts
stated on May 16, 2021 in a Facebook post:
Says photos show a “boneyard” of electric cars abandoned in France because the cars’ batteries were too expensive to replace.

A viral Facebook post that questions whether "we need to go green" shows rows of electric cars in a field in France, and claims the runty two-doors were abandoned simply because their batteries had worn out and were too expensive to replace.

The post, which features photographs of what appear to be dozens of identical vehicles, says:

"This is a boneyard near Paris, France with hundreds of electric powered cars. Mind you these are only cars used by the City of Paris and not personal vehicles. All of these have the same issue .... the battery storage cells have given out and need (to be) replaced. Why not just replace them you ask? Well two reasons. First the battery storage cells cost almost double what the vehicle cost new, and second no landfill or disposals will allow the batteries to be disposed of there. So these green fairy tale electric cars are all sitting in vacant lots while their batteries drain toxins into the ground. Still think we need to go green??? Very interesting." 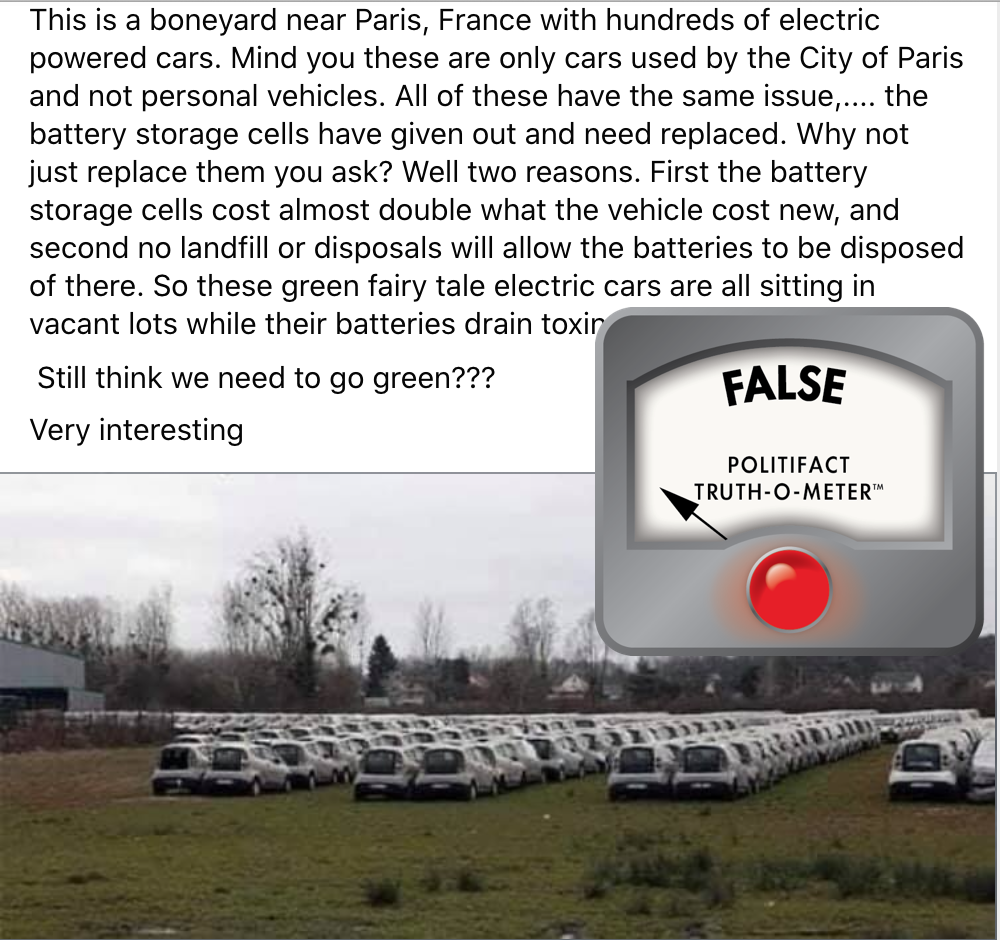 Screengrab from Facebook
The post was flagged as part of Facebook’s efforts to combat false news and misinformation on its News Feed. (Read more about our partnership with Facebook.)
News reports from France say the cars are part of a fleet from a failed car-sharing service, and the vehicles shown in the field are being resold or sold for parts.
A French television news report in April, with photos like those appearing with the Facebook post, said more than 1,000 vehicles used in the Autolib program are being stored on a lot in Romorantin-Lanthenay, an area about 130 miles southwest of Paris.
The Bolloré company had a contract with local authorities in and around Paris to provide the vehicles, which people could borrow for a fee. That ended in 2018 when the service was in debt and failing.
Some 4,000 of the vehicles were sold, mainly to two companies that have been reselling them, according to the report. That includes the ones shown in the Facebook post.
The TV stories and a French newspaper article noted the claims on social media. "Unlike what buzzes on social media, this is not a cemetery," the newspaper report said.
We rate the post False.

Snopes, "Were These Electric Cars Abandoned Because Their Batteries Failed?", May 16, 2021

France Televisions, "What will become of the cumbersome Autolib 'piled up in the "cemetery" of Romorantin?", April 5, 2021

France Televisions, "Ile-de-France: the Autolib 'service will stop on July 31, after a gradual closure of the stations," June 25, 2018

ActuParis, "Three years after the end of Autolib in Paris, a thousand electric cars are waiting for a second life," March 9, 2021