A Palestinian laborer who works in Israel receives his first dose of the Moderna COVID-19 vaccine at a vaccination center at the Meitar checkpoint between Israel and the West Bank on March 8, 2021. (AP)

• The United States’ vaccination program is faring well by international standards, exceeding all but two advanced industrialized nations in the percentage of residents who are considered fully vaccinated.

• However, the percentage of Americans who are fully vaccinated is 40%, not 50%.

• In addition, five other countries have higher rates for full vaccination than the United States does.

During a speech in Cleveland, President Joe Biden earned applause with a line about how well the United States has been doing in vaccinating people against the coronavirus.

"We've created more places to get vaccinated …  and now, 50% of all of America — more than any other country — is fully vaccinated," Biden said in his May 27 speech.

According to data for May 27 from the Centers for Disease Control and Prevention, 40% of the U.S. population is now fully vaccinated, not 50%. 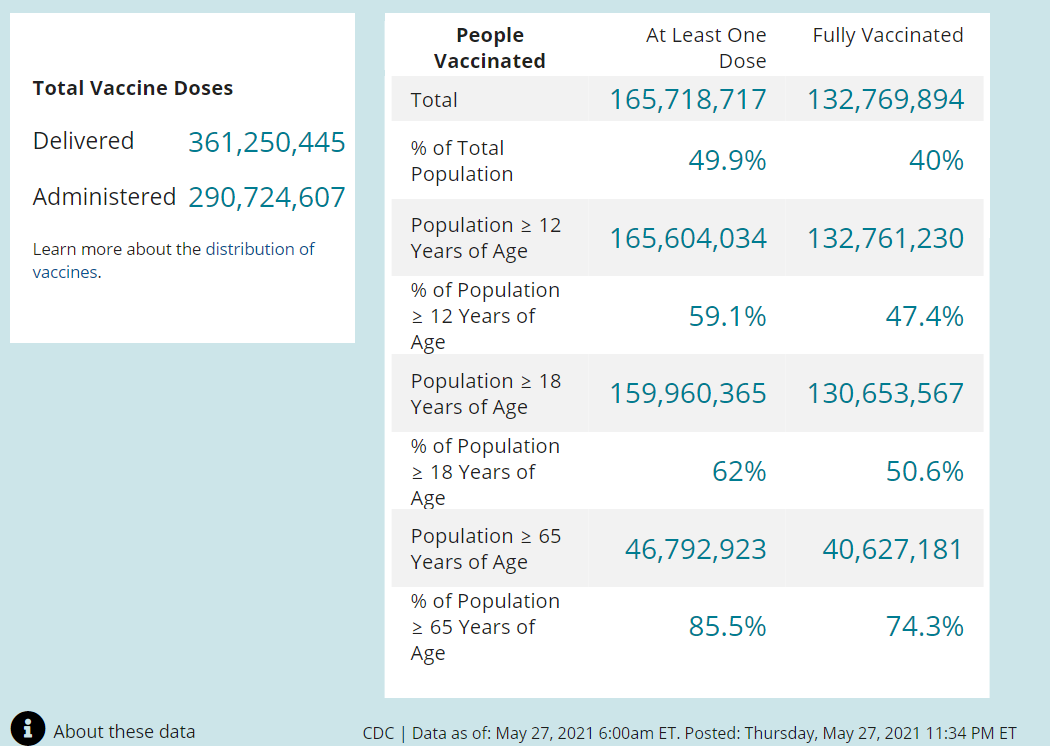 Two other statistics do hover around 50%: Almost 50% of the population has received at least one dose, and slightly over 50% of all U.S. adults are fully vaccinated. (Americans younger than 12 cannot receive a vaccine yet, and the government only recently approved those between 12 and 15 to receive a vaccine. This explains why the adult vaccination figure is higher than it is for the overall population.)

But these statistics would not fit in this context, because Biden said "all of America" and "fully vaccinated."

The U.S. scores well on international vaccination percentages, but it is not No. 1 in the world.

According to statistics compiled by Our World in Data, five countries had higher full-vaccination rates than the U.S. on May 27.  Three are small and aren’t really comparable to the U.S. — Aruba, Bahrain, and Curacao — but two are developed, industrialized nations, Israel and Chile.

On Biden’s broader point, the U.S. does have a higher full-vaccination rate than all members of the Organization for Economic Cooperation and Development — a group of higher-income nations that is often used as a proxy for major nations — except for Israel and Chile.

The White House told PolitiFact that in raw numbers of vaccinated individuals, the U.S. does rank No. 1. That number is backed up by Our World in Data, which reported that on May 27, the U.S. had administered 165.72 million shots, which surpasses second-place India, which had given 158.78 million shots.

However, in his statement in Cleveland, Biden explicitly referred to a percentage, not a raw number, and he specifically said "fully vaccinated," which is a different measurement than the simple number of shots administered.

Biden said, "Now, 50% of all of America — more than any other country — is fully vaccinated."

The United States’ vaccination program is faring well by international standards, exceeding all but two advanced industrialized nations in the percentage of residents who are considered fully vaccinated.

But Biden has exaggerated on two counts. The percentage of Americans who are fully vaccinated is 40%, not 50%. And five other countries have higher rates for full vaccination than the United States does.

Centers for Disease Control and Prevention, "COVID-19 Vaccinations in the United States," accessed May 28, 2021