• A post claiming that violent crime “dropped like a rock” after West Virginia passed a permitless carry law offers a selective representation of the data.

Did West Virginia’s passage of a permitless open carry law for guns produce a precipitous drop in violent crime in the state? That’s what an image on Facebook said.

In 2016, West Virginia lawmakers passed a law that allowed most individuals over the age of 21 to carry a firearm without a permit or safety training. When the law was passed, some critics warned that it would lead to an increase in violent crime.

"Violent crime rate dropped like a rock following West Virginia’s adoption of permitless carry," said the Sept. 20 post, which was attributed to a group called Clergy in Support of the Second Amendment. An accompanying chart shows violent crime rates for the United States and West Virginia, with a drop for the U.S. but a bigger decline for West Virginia after the law was passed. 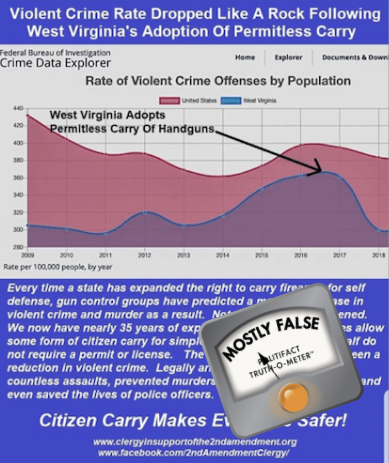 "Every time a state has expanded the right to carry firearms for self defense, gun control groups have predicted a massive increase in violent crime and murder as a result," the post goes on to say. "Not once has this happened."

When we looked at the crime rate in West Virginia after the law was passed, we found a more complicated story. (We reached out to Clergy in Support of the Second Amendment but did not hear back.)

The chart in question used statistics for the violent crime rate, which are collected annually by the FBI from local law enforcement offices. Four types of crime are included: homicide, rape, aggravated assault, and robbery.

However, the chart in the post stops at 2018, and that means it is cherry-picked to leave out a subsequent increase in violent crime, with data that was available at the time the post was published.

In both 2019 and 2020, violent crime went up, and the rate now stands around the same level as it was before the decrease.

Meanwhile, criminologists cautioned that the violent crime rate is a blunt statistic for measuring gun crimes.

"The vast majority of violent crime are aggravated assaults," said James Alan Fox, a Northeastern University criminologist. "Many of these are domestic or involve acquaintances. This would not be impacted" by a permitless carry law.

Jay Corzine, a sociology professor at University of Central Florida whose research focuses on homicide and violent crime, agreed. He said most aggravated assaults do not get reported, and that rape statistics are unreliable.

He said that homicide rates may be a better statistic, although not a perfect one. "For homicide, you’ve got a body," said Corzine. "That calls for an investigation."

So how did the homicide rate change in West Virginia after passage of the law? The statewide homicide rate decreased slightly in 2018, before increasing during the next two years. (The national homicide rate also increased over the same period.)

Looking at the data this way, Corzine said, "I don’t see any reason to believe the law had an impact."

This is a selective representation of the data. After an initial decline in 2017 and 2018, violent crime rose again in 2019 and 2020 and is now back around its level prior to the law being passed.

Jennifer Granholm
stated on September 8, 2021 an interview on CNN:
“West Virginia University just came out with a study that showed that there will be almost 20,000 jobs created in clean energy in West Virginia if (President Joe Biden’s) agenda is passed.”

Tweets
stated on August 30, 2021 on social media:
“Near Morgantown, WV, a Moderna shipment truck crashed, hazmat dispatched, airspace shut down and now apparently Emergency Response is claiming the Department of Defense took it over.”

Jim Justice
stated on March 4, 2021 a tweet:
West Virginia “is the only state to decline in population over the last 70 years”