Tucker Carlson
stated on November 2, 2021 in a documentary film:
“DEA agent Mark Ibrahim was forced from his job and later indicted simply because he was near the Capitol protest on Jan. 6.”

In a new conspiratorial documentary series about the Jan. 6 insurrection, Fox News host Tucker Carlson makes an array of dubious claims over an ominous soundtrack, cutting away to sympathetic interviews with people who he says have been unfairly targeted since the Capitol attack.

Carlson’s film attempts to rewrite the history of Jan. 6 with wild, unsupported claims that the U.S. government is using the day’s events to entrap Americans who voted for former President Donald Trump.

In part two of the three-part "Patriot Purge" series, Carlson tells a story about a man named Mark Ibrahim — a former agent with the U.S. Drug Enforcement Administration who faces multiple charges in the Capitol breach.

Ibrahim, 32, is shown running along the Arlington Memorial Bridge with his dog and completing a tactical training course.

Then Carlson claims: "DEA agent Mark Ibrahim was forced from his job and later indicted simply because he was near the Capitol protest on Jan. 6."

Court documents show that Ibrahim had already submitted his intent to resign from the DEA weeks before Jan. 6. He was considered a probationary employee on leave from the agency the day of the insurrection. Ibrahim was indicted on federal charges because investigators found he brought a gun with him onto Capitol grounds and then made false statements to federal agents in a recorded interview.

None of these details are mentioned in Carlson’s piece.

PolitiFact reached out to Fox News for comment but did not hear back. A DEA spokesperson confirmed that Ibrahim is no longer employed with the agency but did not provide further details.

Carlson’s documentary claims that Ibrahim was invited to the Capitol by a friend —  an FBI informant attending the day’s events to assist the FBI.

Carlson repeats this claim, saying that the friend "strongly encouraged" Ibrahim to go inside the Capitol.

"Ibrahim knew it was illegal so he refused to do it," Carlson says in the video. "Mark Ibrahim now faces 15 years in federal prison."

Federal investigators interviewed the friend, who is not named in the court filing, and heard a different story that is not disclosed in Carlson’s piece. The friend said Ibrahim crafted the story to "cover his a--" and went to the rally in order to promote himself in preparation for launching a possible "Liberty Tavern" political podcast and cigar brand, court documents said. The friend told investigators they were not at the Capitol in any formal capacity for the FBI.

Carlson doesn’t mention any details about Ibrahim’s charges, which include making a false statement and carrying a firearm on restricted grounds.

While Ibrahim did not enter the Capitol, investigators say he climbed onto Peace Monument, which is located on the Capitol grounds, to film himself as he delivered a "monologue" and presented several photos that show Ibrahim posing while flashing his DEA badge and firearm. He also sent photos of himself at the Capitol to a group chat on WhatsApp that included at least five other law enforcement officers, according to court documents. 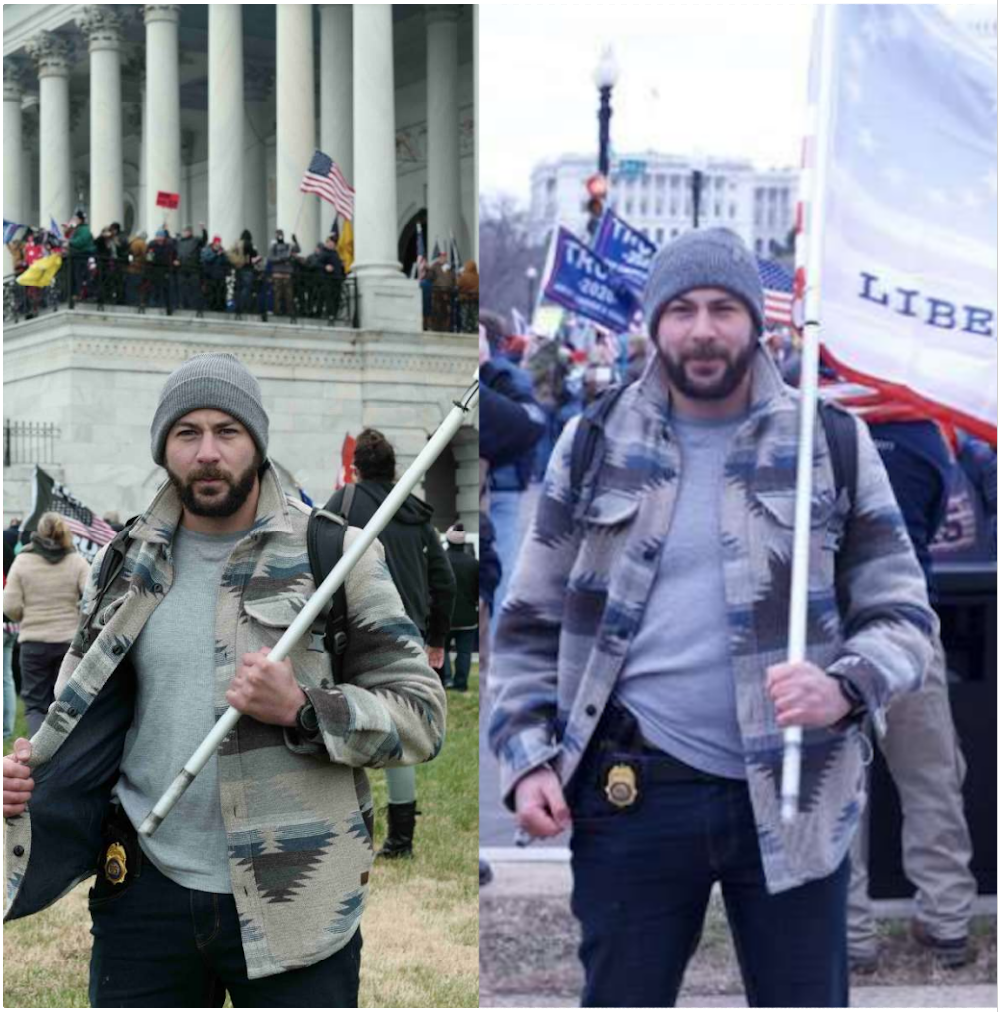 In a recorded interview, Ibrahim admitted to federal investigators that he was at the Capitol on Jan. 6 and that he had his DEA credentials with him, as well as his badge and firearm.

He said, "I had my creds. I had my firearm, and my badge on me … But never exposed … Not that I know of." Pictures show that to be false.

He was arrested in July 2021 and faces charges that include entering or remaining in a restricted building or on Capitol grounds with a deadly or dangerous weapon, and making false statements.

Carlson said Ibrahim was "forced" from his DEA job and "later indicted simply because he was near the Capitol protest on Jan. 6."

Court documents show that Ibrahim had been a probationary DEA employee on leave on Jan. 6 and had given a notice of his intent to resign from the agency several weeks earlier. He was indicted for bringing a firearm on Capitol grounds and for making false statements to federal agents, not "simply because he was near the Capitol."