• The story of a group of farmers standing by at auction to allow a young man to buy back his family farmhouse from the bank has been circulating since at least 2018.

• Although the tale has been shared on many websites, each retelling lacks specific details such as when and where this happened and who ultimately purchased the farm.

Although it’s often nice to see a bit of good news on the internet, not all feel-good stories are created equal. One of the more persistent stories that has circulated on social media for years appears to have stemmed from a vague tale on an obscure travel blog.

A Facebook account called In the NOW that Facebook has deemed "Russia state-controlled media" most recently shared this claim in a post that featured an image of a crowd of people gathered outdoors on a vast green lawn.

"Farmers stand in silence at auction so a young man can buy back his family farmhouse," reads the text beneath the photo. Below the text is another photo, this time of a man in a plaid shirt with his hands on his hips. A label on the photo completes the meme, indicating the man represents "the bank."

"It's about time banks learned who REALLY has the power," In the NOW wrote in the post.

There is no evidence to support that this wholesome farm story actually happened. 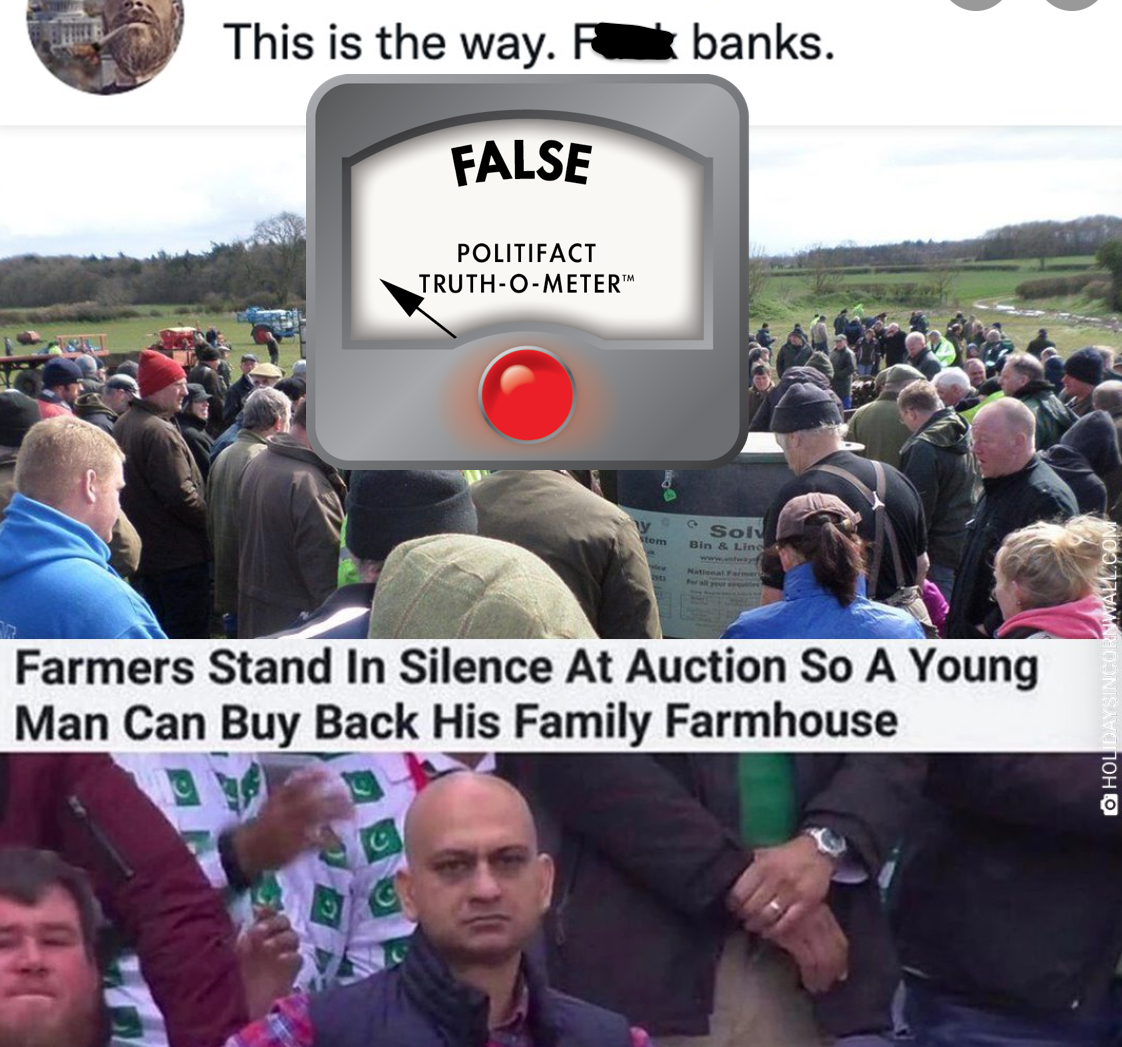 We conducted reverse image searches of the first photo in the post using websites such as Google, Bing, Yandex and TinEye. The earliest appearances of the crowd photo that we could confirm were from 2018.

In an Aug. 29, 2018, entry on what is titled "Mike Brandly, Auctioneer Blog," the author references "the full story" about the farmer appearing on a travel blog called the "Cornwall Holiday Guide."

The Cornwall Holiday Guide website appears to primarily provide people tips for vacationing in Cornwall, England. It’s not clear to us when the website first featured the farmhouse auction talle, but we found this page of the blog was archived Sept. 2, 2018. The original blog post has since been taken down.

The story shared on the travel blog went like this: An unidentified relative of a man named David sold an 80-acre family farm, and David and his father set out to buy the farm back when it went to auction.

"When the auction actually took place, some 200 different farmers were at the auction and David and his father thought they would never be able to afford to buy it back," the blog post said. "When David and his father placed their bid, they took a deep breath and hoped for the best. That is when something fascinating happened. Nobody else tried to put in a bid, and not one single person spoke up. Eventually, the auctioneer had to slam down the gavel and give them the winning bid."

The blog post quoted David as saying, "I’ve had two profoundly humbling days in my life. The first was the day my son was born. The second was that unforgettable day at the auction house."

And searching that quote verbatim on Google, Yahoo and through Nexis news archives did not reveal any further details or credible evidence to support the story.

Although the story was later shared indicating the farm was located in Nebraska, it is unclear where that claim originated. The Cornwall Holiday Guide blog post lacked specific biographical details such as when the auction supposedly happened, David’s last name and the location of the auction or the farmhouse.

The second photo in the post is a popular meme known by a few titles, including "Disappointed Cricket Fan." The image depicts a man with both hands on his waist and a look of displeasure or frustration on his face. That man is Muhammad Sarim Akhtar, a cricket fan whose disappointment with his team was caught on video — and then became a viral meme in June 2019. According to India Today, Akhtar works for PwC UK, a financial services and accounting company.

A Facebook post claimed that a picture of a crowd depicted farmers standing "in silence at auction so a young man can buy back his family farmhouse."

There is no evidence to support this story that has circulated online for at least three years.

The story can be traced back to a tale shared on a UK-focused travel blog. In that blog post, the story lacks specific biographical details such as when this supposedly happened, the last name of the farmer involved or the location of the auction or the farmhouse.

Finding no factual basis for this account, we rate this claim False.

Reddit post, "Farmers standing in silence at an auction so that a young man can buy back his family farmhouse," June 22, 2020

Cornwall Holiday Guide, "​​Farmers Stand In Silence At Auction So A Young Man Can Buy Back His Family Farmhouse," accessed Sept. 13, 2021

India Today, "Remember the disappointed Pak fan meme guy? He is a manager at a popular MNC," June 18, 2021

Facebook posts
stated on March 14, 2022 a Facebook post:
Comparing the price of oil and gas in June 2008 to March 2022 shows that oil companies are “price gouging.”

Facebook posts
stated on March 1, 2022 a Facebook post:
“NEW: Biden Admin. instructs Americans to social distance and wear masks in the event of a Nuclear Fallout.”