Instagram posts
stated on September 20, 2021 in an Instagram post:
The FDA advisory board said unvaccinated people are more educated than most people who have gotten the COVID-19 vaccines.

But that’s what posts circulating on social media claim.

"FDA advisory board said Friday unvaccinated are more educated on the vaccine than most people who have gotten it, and ‘we cannot adequately refute their concerns, which should make us all very uncomfortable,’" a Sept. 20 Instagram post reads.

Donald Trump
stated on October 31, 2022 in an interview
Former President Jimmy Carter said “don’t ever use” mail in ballots because “they can be so easily corrupted.” 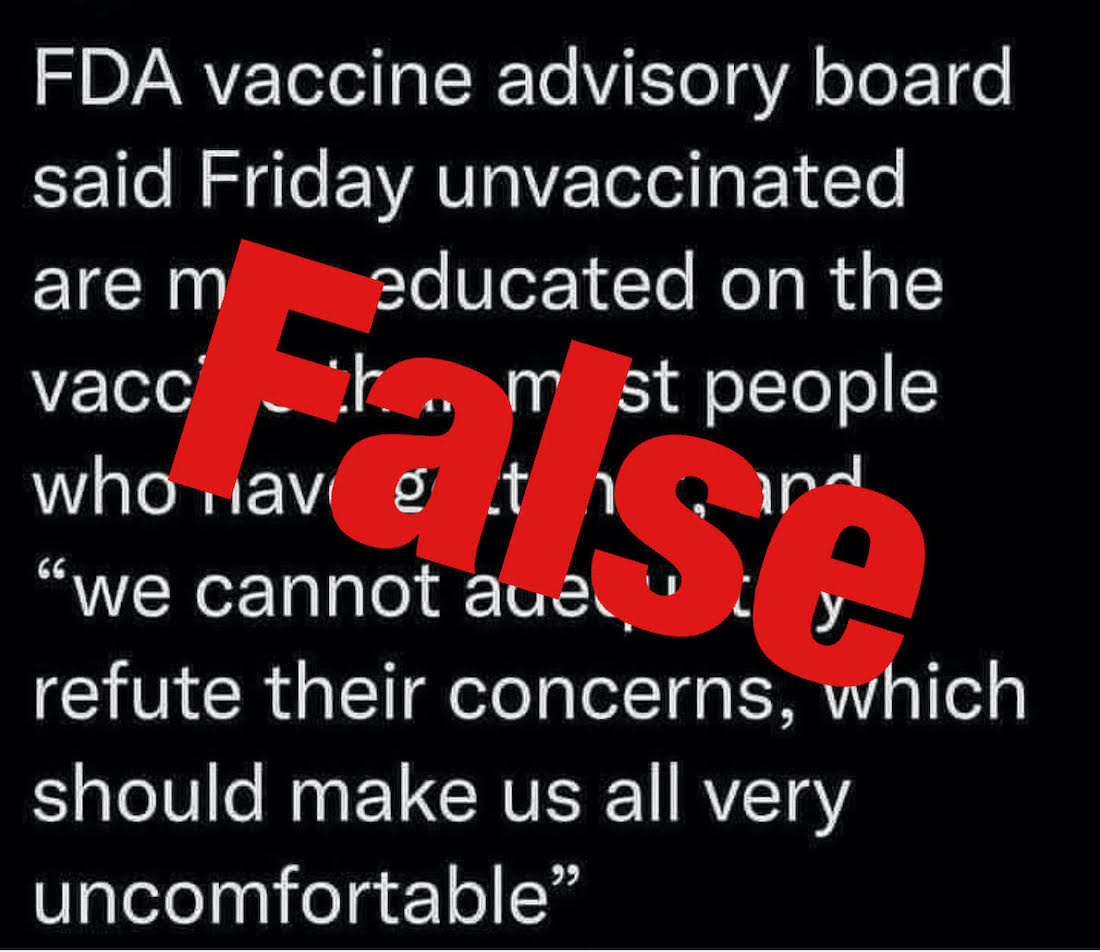 (Screenshot from Instagram)
The post was flagged as part of Facebook’s efforts to combat false news and misinformation on its News Feed. (Read more about our partnership with Facebook.)
The post appears to reference public comments made during a virtual meeting of the FDA’s Vaccines and Related Biological Products Advisory Committee on Sept. 17 regarding COVID-19 vaccine booster shots.
During the meeting, the committee rejected a recommendation that boosters be given to a majority of Americans, but overwhelmingly voted in favor of a third dose for people aged 65 and older, and those at risk for contracting severe COVID-19 disease, like health care workers.
According to the FDA, every advisory committee meeting is required to set aside at least 60 minutes for an open public hearing. This is a time when members of the general public — including industry spokespersons, consumer advocacy groups, professional organizations, societies, or associations — may present relevant information.
It was during this time that Dr. Joseph Fraiman began his presentation titled, "Help Reduce COVID-19 Vaccine Hesitancy: Larger Booster Study Needed To Prove Benefit > Harm in All Age Groups." (His slides are viewable around 4 hours and 17 minutes into the meeting.)
Fraiman said that where he works in New Orleans, La., over 65% of the population remains unvaccinated. His presentation implored the FDA for help to reduce vaccine hesitancy by embarking on larger trials that clearly demonstrate that the COVID-19 vaccines reduce hospitalization without causing serious harm.
"I know many think the vaccine-hesitants are dumb or just misinformed. That’s not at all what I’ve seen," Fraiman says. "In fact, typically, independent of education level, the vaccine-hesitant I’ve met in the ER are more familiar with vaccine studies and more aware of their own COVID risks than the vaccinated."
About two minutes later, he adds: "Without this data, we, the medical establishment, cannot confidently call out anti-COVID vaccine activists who publicly claim the vaccines harm more than they save, especially in the young and healthy. The fact that we do not have the clinical evidence to say these activists are wrong should terrify us all."
The FDA confirmed to PolitiFact that none of the individuals who commented during the public session were FDA employees or members of the advisory committees. Spokesperson Abigail Capobianco said the agency does not endorse statements made during public comment or screen remarks ahead of time.
Our ruling

An Instagram post claimed that a "FDA vaccine advisory board" said unvaccinated people are more educated than most people who have gotten the COVID-19 vaccines.

Someone unaffiliated with the FDA advisory committee said something like this during the public comment period of a Sept. 17 meeting of the FDA’s Vaccines and Related Biological Products Advisory Committee. The agency said it doesn’t endorse remarks by the public.