Is your weather forecaster lying to you?

And it’s about more than impending rain. This time, it's about the cosmos.

The post goes on to suggest other meteorological abnormalities are being covered up, as well, like "electrified neon double rainbows," "Blood red fiery sunrises and sunsets," and skies "glowing abnormally red, orange, purple, yellow, (and) green." The post claims that the cause of all this drama is an impending "Global Pole Shift Cataclysm" that is a mere 22 weeks away.

And the grimmest warning, misspelling meteorologists: "These metrologists are going to comfort you with lies until it's too late."

It makes for a great intro to a sci-fi novel, but otherwise, this claim is entirely invented. Experts confirm that the position of the sun, moon and stars has not moved in unexpected ways, and there have been no dramatic changes in either the magnetic or geographic poles. 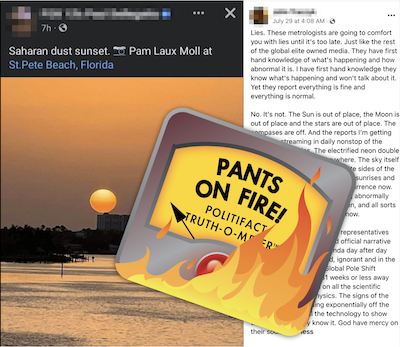 To understand the claim fully, let’s go back to science class.

This is because of the Earth’s tilt relative to the sun — the same tilt that causes changing seasons and longer or shorter days throughout the year. The tilt of the moon’s orbit can also affect where the moon appears in the sky. Even stars, over thousands of years, can shift because of their motion around the galaxy, but these changes require sensitive telescopes and are often imperceptible, said Schmoll.

"All of these (movements) are highly predictable," Schmoll said. "We have been tracking these regular changes for much of human history."

Schmoll is not aware of any recent anomalies in the position of the sun, moon or stars and said, "There are folks outside, amateur and professional alike, who are out almost every night and would notice something off."

"Astronomers are actively engaged in the measurement of the dynamic universe," said Dominic Benford, NASA program scientist for the Nancy Grace Roman Space Telescope. "Daily observations result in the measurement of millions of objects, and these data are made available to the worldwide astronomical community."

Physicists frequently study the motion of the sun and moon, and their movements are well understood, Benford said. "Any significant anomalies in the positions of these would be quickly seen and followed up by the thousands of scientists, and would become well-known. The lack of such announcements is not merely consistent with, but likely predictive of there being no unexpected anomalies in the motions of solar system or Milky Way objects."

So, if the sun and moon aren’t moving, perhaps we are? The Facebook post claims that the freak astronomy is because of a shift in the North and South poles. Good news for polar bears and penguins, this claim is also false.

The Earth actually has two North and South poles: the geographic poles around which the Earth rotates, and the magnetic poles, where our compasses point.

The magnetic North and South poles exist because of Earth’s liquid, metallic core, which creates a geomagnetic field that surrounds our planet. This "magnetosphere" is incredibly important for life on Earth, protecting us from solar winds, particle radiation and cosmic rays that would erode our atmosphere.

And because of "convective flows and magnetohydrodynamic waves" within the Earth’s liquid core, our magnetic poles drift, said Arnaud Chulliat, a senior research scientist at the Cooperative Institute for Research in Environmental Sciences (CIRES) and the lead developer of the World Magnetic Model.

For three centuries, the magnetic North Pole wandered around the northern part of Canada, but Chulliat said that between the late 1980s and early 2000s, the drift rate accelerated from about 15 kilometers/year to about 55 km/year and began moving toward Siberia. Chulliat said that drift speed has since plateaued and even slightly decreased according to recent models. (A kilometer is 0.62 miles)

The magnetic poles can even flip, causing our compasses to point south. On the geologic time scale, it is relatively common. Over the last 20 million years, flips have occurred about every 200,000 to 300,000 years, with the last flip happening around 780,000 years ago. Flips are not instantaneous; they take place over hundreds or thousands of years.

Both Chulliat and geophysicist Ciaran Beggan at the British Geological Institute said there have been no unexpected or concerning changes in the constantly monitored magnetic field, and despite online claims, Beggan said there is "no evidence of an immediate or imminent reversal."

The geographic poles are much stabler. According to researchers, during the 20th century, the geographic poles drifted 4 inches a year, totaling 11 yards of shift by the turn of the century. Recently the drift rate has accelerated, and some researchers have linked it to climate change and melting ice caps, which can alter Earth’s mass distribution. But since 1980, the poles have still drifted only 13 feet, reported USA Today.

Lastly, because of a tidal-force-induced bulge at the equator, the Earth wobbles slightly as it rotates. The process is called axial precession, and the Earth behaves like an off-kilter spinning toy top. But the wobble occurs over a 26,000-year cycle, and its effects are not noticeable in our lifetimes, said Schmoll.

Our solar system has many moving parts. Even the core of our big blue marble is in motion. But there is no evidence that the sun, moon or stars are "out of place" or moving differently than what astronomers would expect.

There is also no evidence of a current or impending shift in either the magnetic or geographic poles. They both move, but slowly.

Conclusion? You can probably trust your weather forecaster.

Email Interview with Ciaran Beggan, a geophysicist at the British Geological Institute, Aug. 1, 2022

Scientific American, "Climate Change Has Shifted the Locations of Earth's North and South Poles," May 14, 2013