Days before the Wisconsin primary, former President Donald Trump made a stop in Waukesha to throw his support behind Republican gubernatorial candidate Tim Michels. The winner of the competitive primary Aug. 9 between Michels and Rebecca Kleefisch will face off against Democratic Gov. Tony Evers in November.

But recent social media posts used an outdated photo to tout the size of the crowd.

Conservative commentator Benny Johnson tweeted on Aug. 6 a photo depicting an event with a large crowd of people wearing red hats and red shirts. In the now-deleted tweet, Johnson claimed, "Trump’s enthusiasm is bigger than in 2016 — this is from last night in Wisconsin. Massive. Just massive."

An Aug. 6 Facebook post shared the same photo and claimed, "This is from last night in Wisconsin. MASSIVE!" 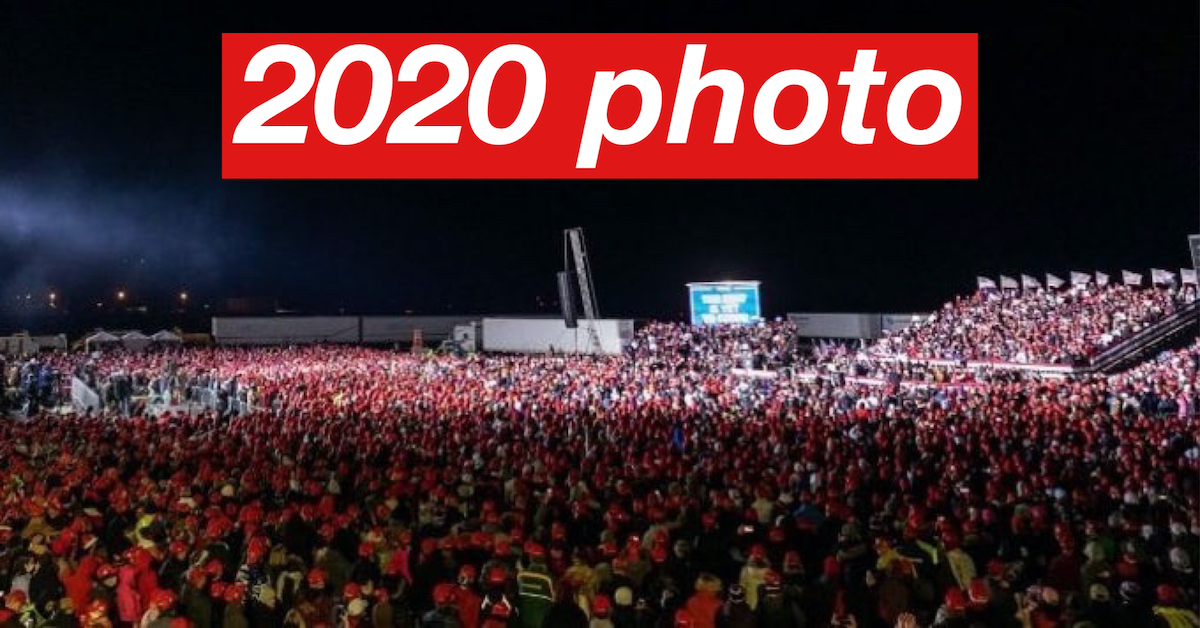 This photo is not from Donald Trump's Aug. 5 rally in Waukesha, Wis. (Facebook)

PolitiFact conducted a reverse image search of the photo and found Trump’s son, Eric Trump, shared it on Twitter in November 2020. At the time, he used the image of a large, apparently pro-Trump crowd to push the false claim that the presidential election was rigged.

Molly Beck, a reporter for the Milwaukee Journal Sentinel, quote-tweeted Johnson’s now-deleted tweet and said the photo in question was not from the Aug. 5 rally. She also pointed to Eric Trump’s tweet as the source of the photo.

The scene depicted in this older photo does not match photos shared by reporters who were on site at the Aug. 5 Wisconsin rally. Media photos show a smaller crowd and a different event layout.

In the older photo, two large screens that read, "The best is yet to come!" can be seen. This was a slogan often used by Donald Trump during his 2020 campaign.

Meanwhile, media photos from the recent rally show two screens displaying the event’s speakers, including Trump, as well as a large, blue sign that said, "Save America!"

Additionally, photos from reporters show there were three bleachers of roughly the same size behind the stage at the event. But in the 2020 campaign photo, there is one large set of bleachers in the center and two smaller sets to the left and right.

Social media posts shared a photo from Trump’s 2020 presidential campaign and claimed it was of an Aug. 5, 2022, rally in Wisconsin.

The photo in question does not show the Aug. 5 rally and can be traced back to a November 2020 tweet from Eric Trump. It also conflicts with several photos taken by reporters on site at the Aug. 5 Wisconsin rally.