Sen. Rick Scott, R-Fla., speaks to reporters after a Republican strategy meeting at the U.S. Capitol on March 8, 2022. (AP)

A North Carolina congressional candidate says the state’s Republican Party wants to raise taxes through what it characterized as "extremist" legislation proposed in the U.S. Senate.

Barbara Gaskins is a Democrat running against U.S. Rep. Greg Murphy in North Carolina’s 3rd Congressional District, which covers a large swath of the state’s coastline. On May 24, Gaskins’ campaign tweeted:

It added that the plan would raise taxes on 40% of the state’s working class, dissolve Social Security and Medicare benefits after five years, close the U.S. Department of Education and enforce identification requirements for voting. 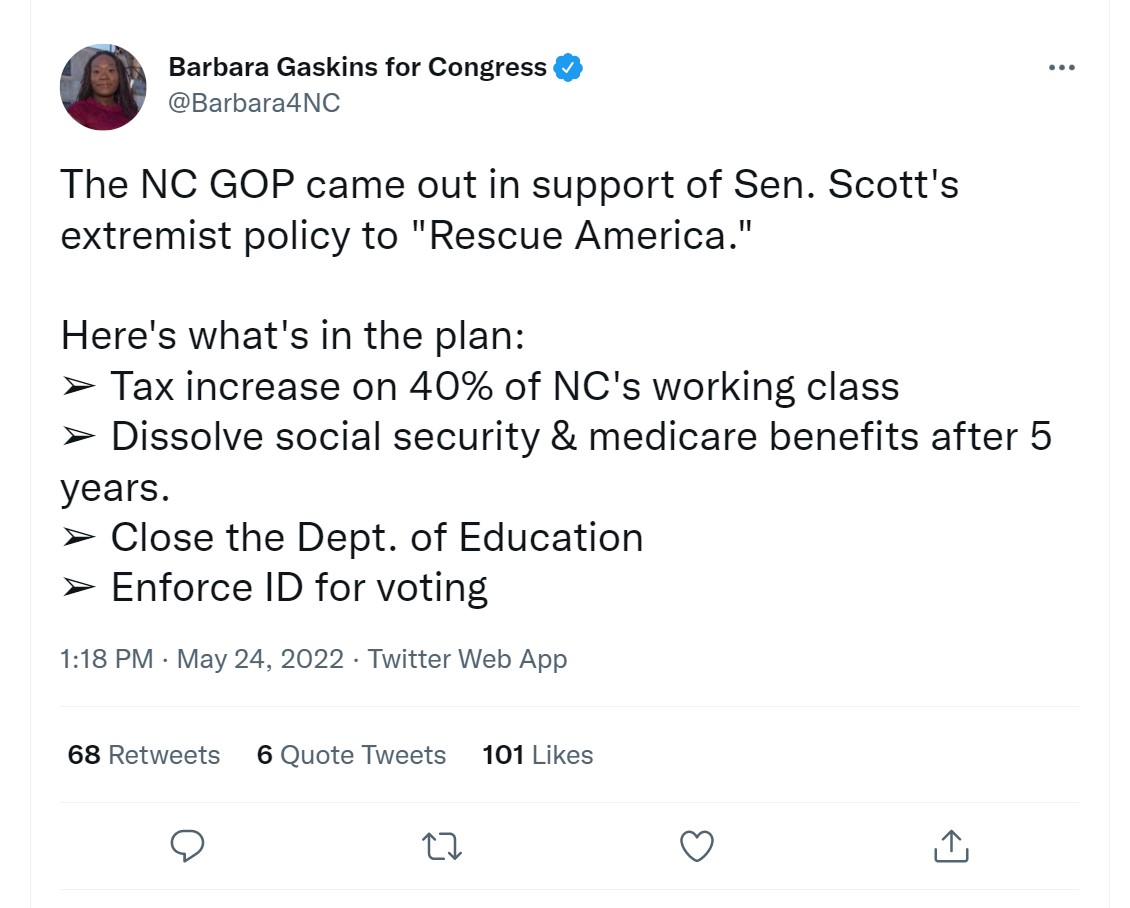 The tweet stood out to PolitiFact North Carolina because the North Carolina Republican Party organization doesn’t regularly promote or endorse bills proposed at the federal level — especially those introduced by lawmakers from other states. And Scott’s bill is controversial, having been rebuked by GOP Senate Leader Mitch McConnell.

Here are the key points of Scott’s bill and why the Democrats are trying to tie Republicans to it.

Scott is chairman of the National Republican Senatorial Committee, which campaigns to elect Republican candidates to the Senate. On Feb. 22, he released what he calls "An 11-point plan to rescue America."

The plan called for taxing all Americans and requiring a vote to continue all federal programs, a proposal that Republican leaders have opposed. So, Republican candidates have distanced themselves from it.

McConnell said in a press conference that Senate Republicans "will not have as part of our agenda a bill that raises taxes on half the American people, and sunsets Social Security and Medicare within five years."

Nonetheless, Democrats have tried to elevate it during campaign season as a sign of things to come if the GOP gains control of Congress in the November midterm elections. PolitiFact has reported on the plan and fact-checked multiple misleading claims about it. Here’s a brief explanation of the proposals mentioned in Gaskins’ tweet.

A "tax increase on 40% of N.C.'s working class." Scott’s plan says "all Americans should pay some income tax." While Scott has denied that the plan calls for a tax increase, tax and policy experts previously told PolitiFact that Scott’s plan appears to target people who don’t owe any federal income tax because they don’t earn enough income.

Experts said about 60% of taxpayers fell into that group in 2020, but that the group would likely shrink to about 40% in 2022. The left-leaning Institute on Taxation and Economic Policy estimated Scott’s plan would affect 39.8% of North Carolina residents.

"Enforce ID for voting." The plan says: "Voter ID, requiring a voter to validate their identity, must be the law."

Scott and the N.C. GOP

Michael Whatley, the state GOP chairman, says that’s not true. He told PolitiFact NC that he was glad to have Scott speak because, as chair of the senatorial committee, Scott offers unique insight into how the GOP can retake Congress this fall. But that doesn’t mean the state party endorses his bill.

"We’re not going to endorse that," Whatley said in a phone interview.

Donna Williams, chair of the Wake County GOP, attended the event and didn’t recall Scott mentioning his bill or its details. If Scott had mentioned a call to increase taxes, "I would absolutely remember that," she said, saying it’s "ridiculous for anyone to suggest that inviting someone to come speak implies an across-the-board blanket endorsement of whatever legislation they have."

Aside from Scott’s appearance at the North Carolina Republican Party convention, neither the party nor the Gaskins campaign provided any evidence that the organization had endorsed the Scott plan. In a phone interview, North Carolina Democratic Party spokeswoman Ellie Dougherty reiterated the claims from the email newsletter and said, "We think it's pretty clear where they stand."

Gaskins tweeted that "the N.C. GOP came out in support of Sen. (Rick) Scott's extremist policy to ‘Rescue America.’"

Scott did release a plan that indicates support for raising income taxes and sunsetting federal programs such as Social Security and Medicare. Even McConnell rebuked the ideas.

However, there’s no evidence that the North Carolina Republican Party has come out in support of Scott’s plan.

Analysis by the Institute on Taxation and Economic Policy, "State-by-State Estimates of Sen. Rick Scott’s ‘Skin in the Game’ Proposal," posted March 7, 2022.