Jim Lamon
stated on June 2, 2022 in a statement posted on Twitter:
Blake Masters “unironically quoted a Nazi, called World War II an unjust war, called the Unabomber one of his intellectual influencers, and shared an article attacking Israel as the North Korea of the Middle East.”

Jim Lamon (left) and Blake Masters are running in the Republican primary for U.S. Senate in Arizona. (Gage Skidmore via Wikimedia Commons)

Displeased that his competitor in the Arizona Republican primary for U.S. Senate won an endorsement from former President Donald Trump, Jim Lamon took to social media to lay out why that was the wrong call.

"Blake Masters would be shred to pieces by Mark Kelly and the Democrats as someone who has unironically quoted a Nazi, called World War II an unjust war, called the Unabomber one of his intellectual influencers, and shared an article attacking Israel as the North Korea of the Middle East," Lamon tweeted June 2, the same day Trump issued his endorsement.

Under the banner of America First, Lamon and Masters share many common policy positions. They both have questioned the results of the 2020 presidential election. They say tougher border security is a matter of public safety, and see China as a key threat to American jobs. They oppose "critical race theory" in schools, although it isn’t part of K-12 school curricula.

Neither man has run for office before. Lamon chairs a solar power company and served in the Army as an airborne officer. Masters recently stepped down as an executive in a venture capital investment fund overseen by billionaire PayPal co-founder Peter Thiel. Thiel has put more than $13 million into a Super PAC to promote Masters, and lobbied Trump to endorse him. Fox News host Tucker Carlson called Masters "the future of the Republican Party."

‘Someone who has unironically quoted a Nazi’ 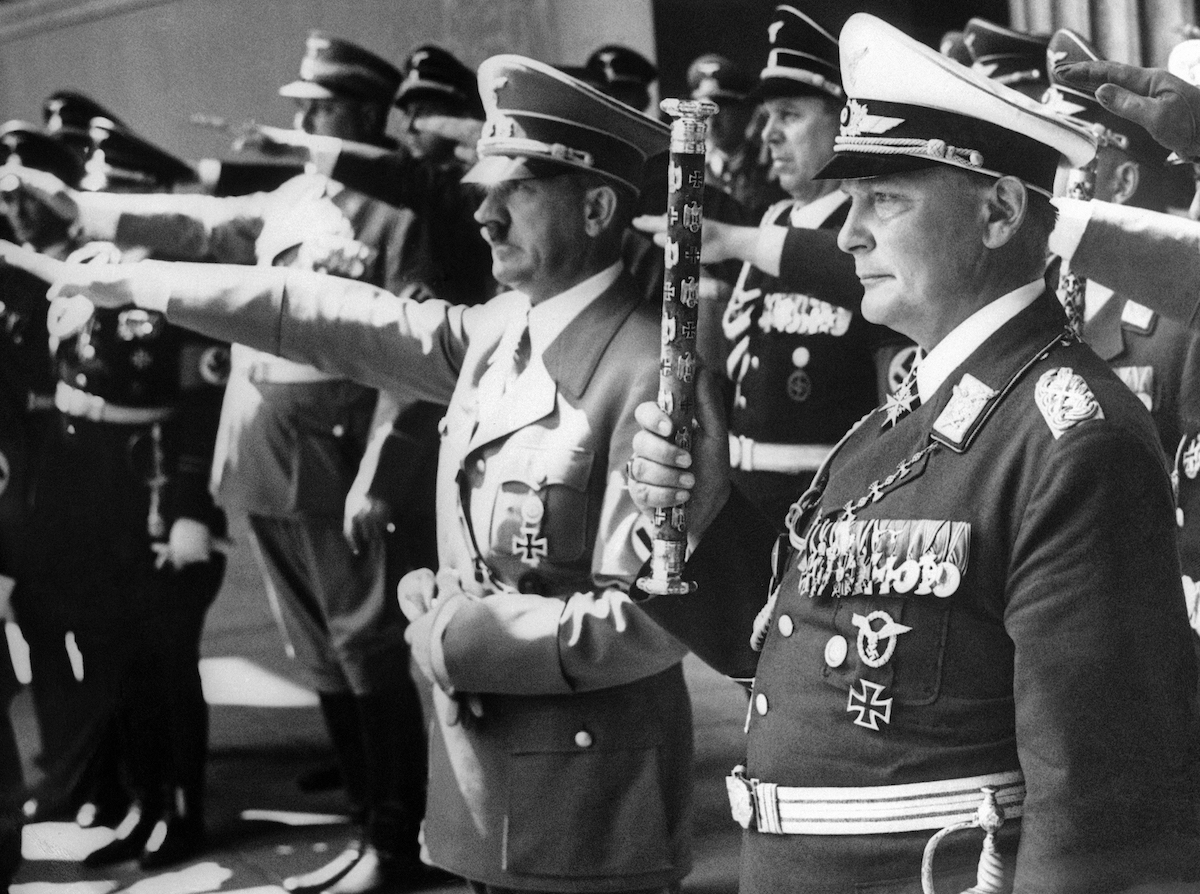 Hermann Goering, right, pictured with Adolf Hitler, center, during the ceremony in Berlin on June 6, 1939. (AP)

Yes, Masters quoted a Nazi, but context here matters. It appeared in a 2006 essay Masters wrote while in college at Stanford University.

The essay was 19-year-old Masters’ take on how the government uses propaganda to win popular support for war. (Masters is now 35.) In the piece, Masters argued that "government creates war for no good reason." War, he said, enriches the wealthy and does nothing for the average citizen. Masters described how President Woodrow Wilson built the case for America’s entry into World War I, and how the largest banks profited from it.

The essay ends with a quote from Hermann Goering, convicted war criminal and Adolf Hitler’s right-hand man during the Nazi regime.

"The people can always be brought to the bidding of the leaders," Goering said in an interview with American psychologist Gustave Gilbert, who published the statement in his book, "Nuremberg Diary." "That is easy. All you have to do is tell them they are being attacked and denounce the pacifists for lack of patriotism and exposing the country to danger. It works the same way in any country."

The quote highlighted the sort of manipulative messaging that Masters condemned in his essay.

Masters’ use of "unjust" came from the same college essay. Masters wrote: "Unjust wars (and the U.S. hasn’t been involved in a just war in over 140 years) always benefit certain groups and ultimately serve the aspirations of the political class in general at the expense of thousands and millions of lives."

The span of 140 years would include World War II. Masters has since stepped back from that part of his essay.

"I was 19, writing in opposition to the Iraq War — a stance that turned out to be prescient," Masters said in a statement published in to Jewish Insider in April. "I went too far and stated that no recent American wars have been just."

Amalia Halikias, a spokesperson for Masters’ campaign, said Masters has made it clear that "he believes American involvement — and victory — in WWII was just."

‘Called the Unabomber one of his intellectual influencers’ 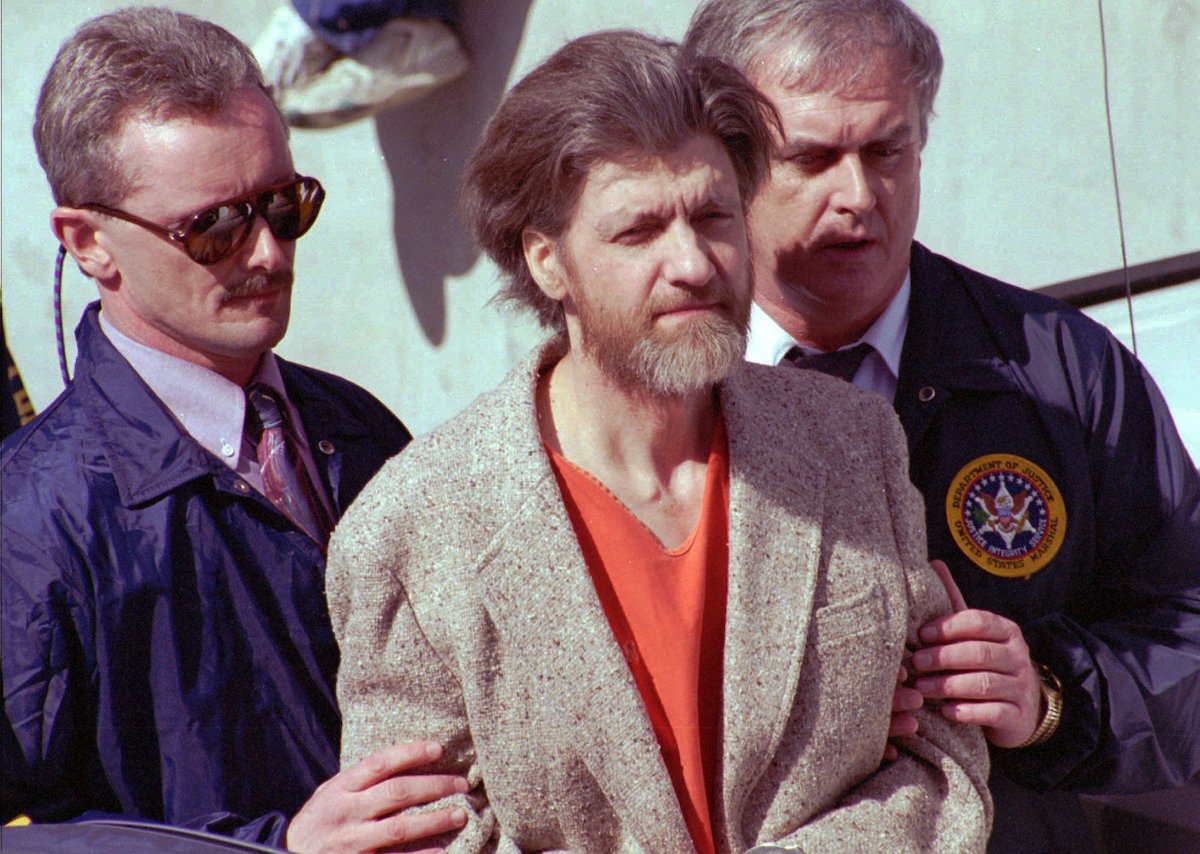 In this file photo from April 4, 1996, Ted Kaczynski, known as the Unabomber, is flanked by federal agents as he is led to a car from the federal courthouse in Helena, Montana. (AP)
In an interview published March 16, 2022, Masters was asked if he has a "subversive thinker" that he thinks is "underrated and would influence people in a good direction."
Masters spoke of Ted Kaczynski, the man who was known as the Unabomber after mailing booby-trapped packages that killed three people and injured 23 between 1978 and 1995. Kaczynski has written about industrialization in multiple books and in his published manifesto, where he argued that destroying industrial society is necessary for restoring the environment and human satisfaction.
"He’s a terrorist, you shouldn’t hurt people, obviously," Masters said in the interview. "There’s a lot that I disagree with, right, like this is not an endorsement, but there’s a lot of insight there that is correct."
Masters said he broadly agreed with Kaczynski's criticisms of industrial society and his view that the political left "fundamentally hate(s) anything like goodness, truth, beauty, justice."
Masters never named the Unabomber as one of his "intellectual influencers," but he did say "everybody should read" Kaczynski’s work and decide what they agree and disagree with.
‘Shared an article attacking Israel as the North Korea of the Middle East’

In 2010, Masters shared to his father’s Facebook page a link to an article that likened Israel to North Korea.

The 2010 article on a libertarian website (the same one that republished Masters’ 2006 college essay) detailed the plight Gazans and Palestinians face under the "unjust rule of the Israeli military." In it, the author wrote, "Israel is increasingly the North Korea of the Middle East."

The Facebook post is no longer public, but the April Jewish Insider article included a link to a screenshot. The image shows Blake Masters shared the article link with his father, Scott Masters.

The Masters campaign didn’t challenge Laman’s assertion that Masters had shared the article. Halikias said "Blake is a strong defender of Israel."

On his website under his first priority, "Make America Safe Again," Masters promises to "get rid of ‘wokeness’ in our military" and then to "support military action only in defense of the U.S. and our allies like Israel." He also promises to "get tough on China, by far our top geopolitical rival."

Lamon said Masters quoted a Nazi, called World War II unjust, named the Unabomber as one of his intellectual influencers, and shared an article attacking Israel as the North Korea of the Middle East.

Each of these statements has some truth, but leaves out key details.

Lamon left out that it was in a college essay in which Masters used a Nazi quote to highlight how governments use propaganda to win support for wars that don’t help their people. In the same essay, Masters implicitly called World War II an unjust war. He has since acknowledged that the statement "went too far."

Masters did praise Kaczynski's thoughts, but it was in response to a question about a "subversive thinker," and Masters condemned Kaczynski’s actions, calling him a "terrorist."

We rate Lamon’s statement Half True.

LewRockwell.com, "How To Survive Under Economic Destructionism," June 5, 2010

Politico, "Tucker Carlson Calls Him the Future of the GOP. First He Has to Get Elected," May 27, 2022

Facebook posts
stated on December 31, 2017 a video interview:
"ADHD does not exist."

Jim Lamon
stated on June 2, 2022 a statement posted on Twitter:
Blake Masters “unironically quoted a Nazi, called World War II an unjust war, called the Unabomber one of his intellectual influencers, and shared an article attacking Israel as the North Korea of the Middle East.”