Sarah Palin
stated on March 25, 2022 in a Facebook post:
The Biden administration is attempting “to criminalize free speech.”

A recent terrorism bulletin from the federal government warned that false information about election fraud and COVID-19 is contributing to a heightened threat of domestic extremist attacks.

Some are using that February document to falsely claim that President Joe Biden is trying to criminalize free speech. 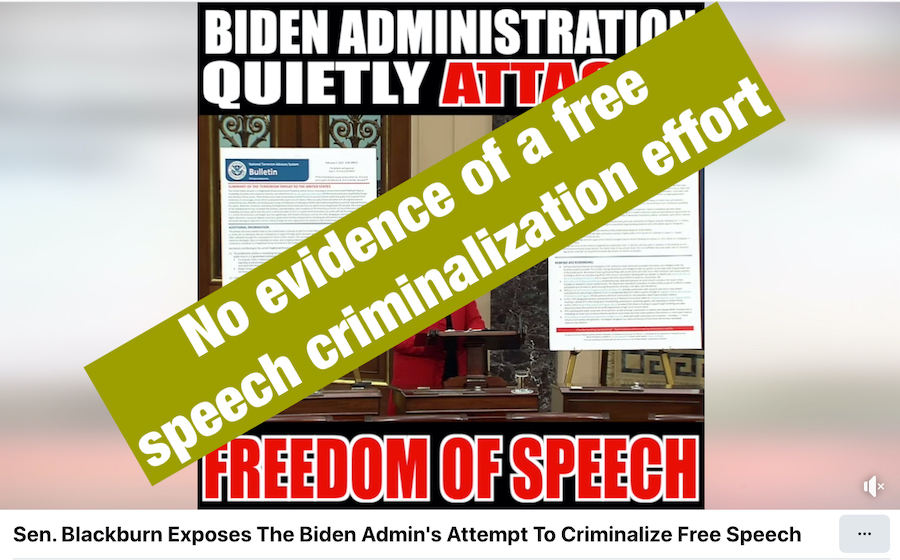 (Screengrab from Facebook)
In the video, Blackburn railed against the Department of Homeland Security’s bulletin, saying it shows Biden’s "desire to police the speech, thoughts and opinions of American citizens and to deputize the public to help keep dissenters in line." Blackburn said she sent a letter to DHS Secretary Alejandro Mayorkas about her concerns.
It’s possible such a bulletin could chill citizens’ speech if they think the government is monitoring their Facebook posts, but the bulletin makes no statements about criminalizing free speech, experts we spoke with said. And while it’s not spelled out in this bulletin, the DHS and the White House have expressed multiple times in other documents the administration’s intent to protect Americans’ First Amendment rights.
Palin did not respond to PolitiFact’s email seeking comment or evidence of her claim.
What the bulletin says

The Feb. 7 bulletin says the U.S. is in a "heightened threat environment fueled by several factors, including an online environment filled with false or misleading narratives and conspiracy theories," and other forms of misinformation.

It warned that foreign powers amplify those falsehoods to damage the U.S. The bulletin states that "grievances associated" with false or misleading narratives about election fraud and COVID-19 "inspired violent extremist attacks during 2021." The bulletin doesn’t cite any examples, but that’s likely a reference to the Jan. 6, 2021, attack on the U.S. Capitol, which has resulted in more than 775 individuals arrested, including some defendants who carried weapons, assaulted police officers or were associated with extremist groups.

"It is abundantly clear that we live in a time of increased threats of violence against election officials and poll workers fueled by election disinformation and conspiracy theories and like a pile of dry kindling it only takes a spark to ignite real world violence," Littlewood wrote in an email.

The bulletin encourages citizens to report potential threats to authorities. Nowhere, however, does it suggest they report people for having dissenting views, but rather for "suspicious activity" or "threats of violence."

The DHS bulletin "does not establish any effort to criminalize free speech," Wizner told PolitiFact. "At most, it establishes that the government has decided to keep an eye on people because of free speech, which may or may not be appropriate in different circumstances, but it’s certainly not criminalizing it."

The DHS under Biden has warned in a terrorism bulletin repeatedly about the dangers of false narratives and conspiracy theories. This is the fifth such bulletin since he took office.

In the very first bulletin on Jan. 27, 2021, DHS warned that "perceived grievances fueled by false narratives, could continue to mobilize to incite or commit violence." Bulletins in May, August and November also discussed misinformation, which prompted false claims that the government was calling Trump supporters terrorists.

Brian Levin, director of the Center for the Study of Hate and Extremism, said it’s a mischaracterization to say the DHS report seeks to criminalize free speech. He said the document accurately summarizes the "consensus of trends observed within the extremism monitoring profession."

Levin said only a fraction of today’s conspiracy theories represent a direct threat, but the spread and acceptance of misinformation can impact "small informal cells and idiosyncratic loners," both here and abroad.

Levin pointed to violent incidents in 2021, including one where a Maryland man was accused of killing his pharmacist brother over COVID-19 vaccines that he thought the government was using to poison people.

Warnings about conspiracy theories aren’t unique to this administration, although Biden has put an increased focus on domestic extremism in the wake of the Capitol attack.

While campaiging for the presidency, Biden promised to work for a new domestic terrorism law that "respects free speech and civil liberties."

Alan Chen, a professor at the University of Denver’s Sturm College of Law and an expert on free speech issues, said there are two ways the government might restrict free speech: either by imposing criminal or civil penalties on a person because of their views, or by creating conditions that can have a chilling effect on expressing them.

"There is nothing in the bulletin that falls into that first category," said Chen. To the second point, he said Blackburn seemed to be implying that the document could chill the speech of dissenters, which he said is possible.

But the post’s assertion that this shows the Biden administration is trying to criminalize speech is wrong on two counts, he said. The government stating an opinion about the effect of election misinformation doesn’t mean it is imposing a penalty on those who believe the election was stolen, Chen said. And the bulletin makes a verifiable statement that domestic extremists continue to advocate for violence in response to false election claims. Threats of violence are not speech that is protected by the First Amendment, he said.

The ACLU’s Wizner said calling for the overthrow of the U.S. government online is protected speech, but nothing written in the bulletin criminalizes that speech. While there may be concerns about surveilling people because of their ideology, he said, Palin and Blackburn overstate them.

"My message is, (it’s) good to keep an eye on the government because they don’t have a great track record historically of staying within bounds when they’re doing security-related domestic surveillance, but the claim here is beyond hyperbole. It’s just false," Wizner said.

A video shared on Facebook by Palin said that Sen. Blackburn exposed "the Biden admin’s attempt to criminalize free speech."

In the video, Blackburn criticizes a National Terrorism Advisory System bulletin. The document from DHS mentions false narratives and conspiracy theories shared online as a contributing factor in a "heightened threat environment."

But simply drawing attention to online misinformation does not constitute an attempt to criminalize free speech and nowhere in the document does the administration advocate for a policy that would criminalize it. The Biden administration has multiple times expressed its intent to protect free speech in other documents related to the role of misinformation in domestic extremism.

Email exchange with Jesse Littlewood, vice president for campaigns with Common Cause, March 30, 2022

Email exchange with Brian Levin, director of the Center for the Study of Hate and Extremism, March 30, 2022

Center for the Study of Hate and Extremism, "Report to the Nation: 2019 — Factbook on hate & extremism in the U.S. & internationally"

U.S. Department of Homeland Security, "Summary of Terrorism Threat to the U.S. Homeland," May 14, 2021

Center for Strategic and International Studies, "The Evolution of Domestic Terrorism," Feb. 17, 2022

Instagram posts
stated on January 27, 2023 an Instagram post:
"Doctors say colon cancer is on the rise due to toxins absorbed while cooking food (in) the microwave.”