Keith Pekau
stated on April 11, 2022 in in a campaign advertisement:
We’ve reduced crime to its lowest level in 27 years.

Orland Park Mayor Keith Pekau claims the village’s crime is the lowest it has been in 27 years.

"We’ve reduced crime to its lowest level in 27 years," Pekau said in a recent Facebook campaign ad with more than 88,000 views.

So we decided to check.

One of Pekau’s campaign spokesman said the mayor was referring specifically to index crimes, which include larceny, theft, motor vehicle theft, homicide, burglary, rape, aggravated assault, robbery and arson. These crimes are reported to the FBI to create their annual crime index. Illinois includes human trafficking in their list of index crimes.

When asked for evidence to back Pekau’s claim, the spokesman sent a presentation former Orland Park Police Chief Joe Mitchell gave to the Village Board during a meeting earlier this year. The chief showed the board a chart showing the number of crimes each year from 1996 through 2021. In 1996, there were 1,295 index crimes reported, compared to 628 in 2021.

We also checked the chief’s numbers with the Federal Bureau of Investigation, which collects crime statistics data from law enforcement agencies throughout the nation. The chief’s numbers match, at least through 2020. The village’s 628 reported crimes in 2021 have not yet been officially reported by the FBI. Never in the past 27 years have there been fewer reported crimes in Orland Park, the statistics show.

Mitchell told the board he credited his police force, new technology and community engagement for the downward trend.Mitchell also said a "crucial" tool has been a stepped up social media campaign called, "Wanted Wednesdays" in which the community is asked to help track down suspects.

Wanted Wednesday: It was all a BLUR! A victim was pickpocketed at the local Jewel grocery store. What a SPECTACLE. I-RIS we knew who they were. Don't LASH out, but if you recognEYES them, call 708-349-4111 or email [email protected] #wantedwednesday #orlandparkpolice pic.twitter.com/y7eCxpYyiz

The report showed crime generally fluctuated over 25 years, including a spike in violent crime in 2017 — the year Pekau took office. The 35 reported violent crimes in 2017 was more than in any other year between 2012 and 2021, according to statistics provided by the police department. 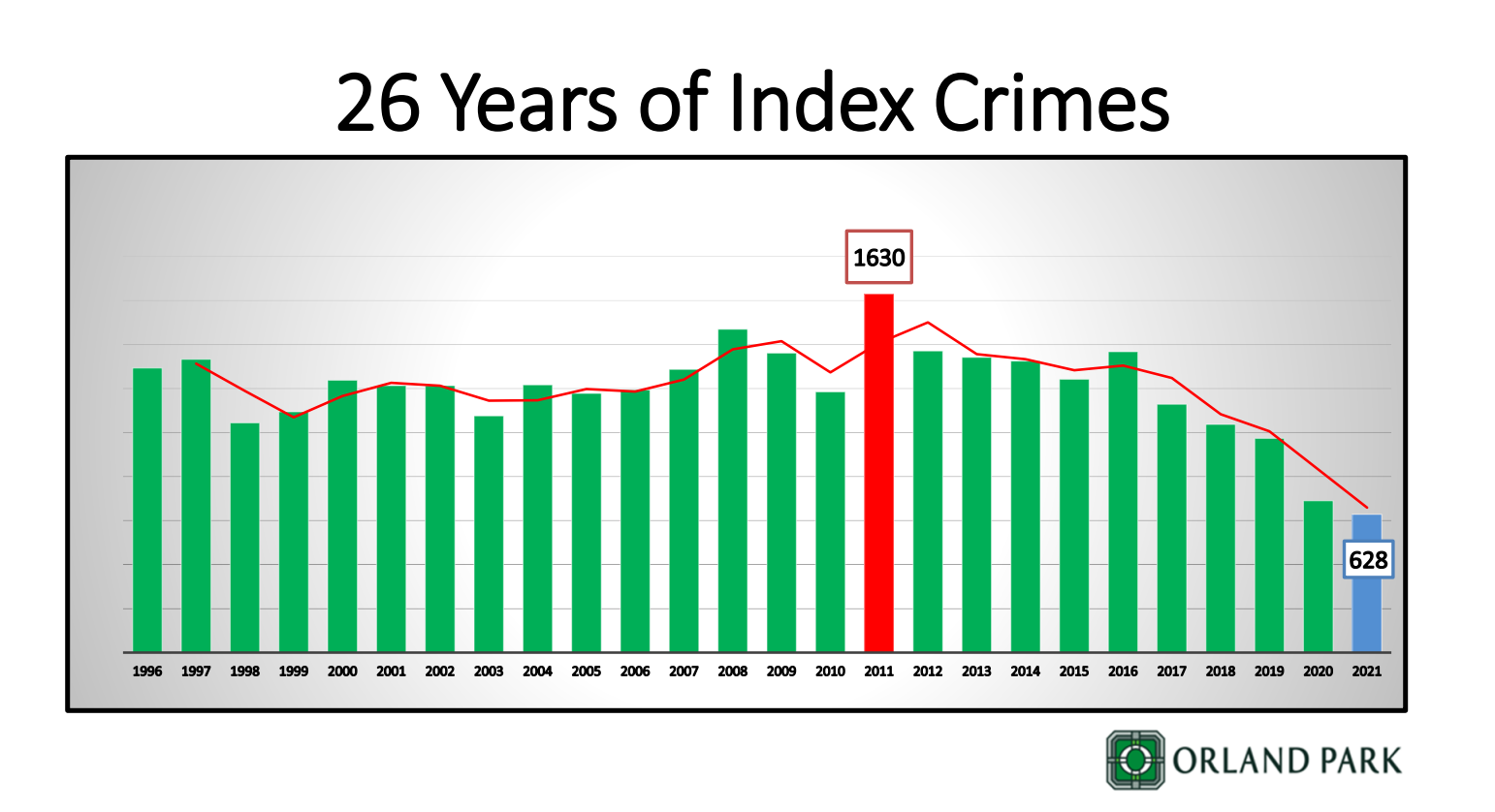 We also reached out to Orland Park Police to determine whether any changes in police tactics or policies may have contributed to the downturn of reported crimes, but our phone messages were not returned.

Just because reported crimes are down in Orland Park, that doesn’t mean there is no crime problem. Consider the Orland Square Mall, which continues to be the "busiest beat" for criminal related offenses according to the most recent OPD annual report.

After several instances of shoplifting and brawls — some of which included gunfire, the mall owner Simon Property Group, Inc. implemented a first-ever curfew last year. After 3 p.m. on Fridays and Saturdays, anyone younger than 18 must now be accompanied by an adult.

Ruling
Pekau claims crime in Orland Park is at its lowest level in 27 years. Index crimes are currently at their lowest, but the crime problems in some areas remain. Pekau also did not mention the high number of violent crimes reported in 2017, the year he took office.

Greg Abbott
stated on May 25, 2022 a press conference:
"We need to realize that people who think that ‘well, maybe if we could just implement tougher gun laws, it’s going to solve it,’ Chicago and LA and New York disprove that thesis."

Keith Pekau
stated on April 11, 2022 in a campaign advertisement:
We’ve reduced crime to its lowest level in 27 years.

Mary Miller
stated on April 8, 2022 a tweet:
The Biden Administration is engaging in extreme ‘woke’ politics by encouraging children to take chemical castration drugs and undergo surgeries, and they are lying to children by telling them puberty blockers are "reversible."

Tammy Duckworth
stated on March 15, 2022 a tweet:
“An extra 2 whole months and 15 days. That’s how long it takes for white women to make the same amount men made in the same job last year. And it's even worse for women of color.”

Blaine Wilhour
stated on February 9, 2022 a press conference:
"There is absolutely no observed or clinical data that indicates any benefit whatsoever to masking K-12 students in schools."

JB Pritzker
stated on February 2, 2022 the 2022 State of the State address.:
“A larger percentage of Illinoisans have been vaccinated than in any other Midwestern state.”

Lori Lightfoot
stated on December 31, 2021 a year-end press release.:
"Chicago maintained the lowest unemployment rate through most of 2021 of any large American city."