A striking image of men dressed in what appears to be religious garb next to Army-green weaponry is circulating online with this description: "Russian Orthodox Church blessing a rocket called Satan."

Amid Russia’s ongoing war in Ukraine, readers may assume that this is a recent photo. 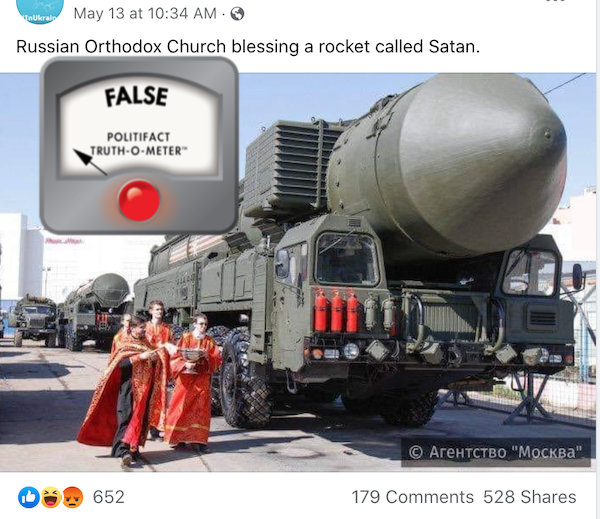 The English translation of the caption for this photo and others from that were taken on May 6, 2015, reads: "Ritual of blessing the participants of the Victory Parade and the consecration of launchers on the Khodynka field."

The English translation of story posted with the photo on a Ukrainian news site a few days later says: "Russian priests perform a ceremony of blessing the participants of the Victory Parade in Moscow and consecration of the Yars missile complex at the headquarters of the Strategic Missile Forces on the Khodynskoye field."

Victory Day is an annual May 9 celebration of the Soviet Union’s victory over Nazi Germany in World War II. But photos from the 2015 parade marking the holiday, including this one from the Chinese news agency Xinhua, describe the weapon that the priests blessed not as "Satan" but as another missile, the RS-24 Yars. That type of missile was also captured in Associated Press photos from a 2022 dress rehearsal for the parade.

"Satan" was a NATO nickname for another Russian missile: the RS-36M. "Satan 2," is an RS-28, the missile replacing the RS-36M, NBC News reported. We’ve previously debunked claims that "Satan 2" is capable of destroying everything in the world.

Under Russian President Vladimir Putin, the Russian Orthodox Church has developed closer ties with the country’s defense ministry, Reuters reported. Russian priests "have long appeared in images sprinkling holy water on submarines, ballistic missiles, Soyuz space rockets and other pieces of hardware as part of rituals to bless them," the news outlet said.

Moscow City News Agency, Ritual of blessing the participants of the Victory Parade and the consecration of launchers on the Khodynka field, May 6, 2015

Daily Mail, Thermonuclear missiles roll through Red Square as Putin sends chilling warning to the West: Russia prepares for Victory Day parade while its army continues its carnage in Ukraine, May 8, 2022

NPR, ​​Russia's Victory Day celebrations take on new importance for the Kremlin this year, May 8, 2022

Xinhua, A RS-24 Yars intercontinental ballistic missile system moves on the Red Square during the military parade marking the 70th anniversary of the victory in the Great Patriotic War, in Moscow, Russia, May 9, 2015