Facebook posts
stated on May 11, 2022 in a Facebook post:
The U.S. government’s inaction over buffalo killing that harmed Native American populations in the 1800s shows it is now “is creating food shortages” so that Americans are more “dependent on the government.”

A herd of bison graze in the Lamar Valley of Yellowstone National Park in Wyoming on Aug. 3, 2016. (AP)

Concerns about the country’s food supply are weighing heavily on many Americans as baby formula is hard to find and international conflict threatens commodities like wheat in some parts of the world.

A social media post invoking those fears harks back to U.S. history to suggest that the government is purposely creating food shortages.

"In 1873 the U.S. government killed 1.5 million buffalo to starve Native Americans so they would become more dependent on the government," read one such May 11 post. "Fast forward to today, and the government is creating food shortages to achieve exactly the SAME goal!"

The post has a point about why so many buffalo were killed in the late 1800s, but it makes an unfounded comparison: There’s no evidence the U.S. government is currently creating food shortages.

The campaign to kill buffalo

In the mid-1800s, more than 30 million buffalo roamed the plains; by the end of the 19th century, only a few hundred remained.

The rapid population decline was due to overhunting, which was welcomed by U.S. officials as a way to force Native Americans in the Great Plains region to settle on reservations.

Andrew Isenberg, an American history professor at the University of Kansas and the author of "The Destruction of the Bison," said white hunters in the late 1800s likely killed "far more" than the 1.5 million buffalo mentioned in the post — a fact federal authorities knew.

"The U.S. federal government did not actively destroy bison in order to starve Indigenous people in the Great Plains into submission," he said. "But the federal government stood by and refused to prevent the wasteful destruction of bison by private white hunters and then welcomed the result of the near extinction of the species: Indigenous peoples’ surrender to the reservation system." 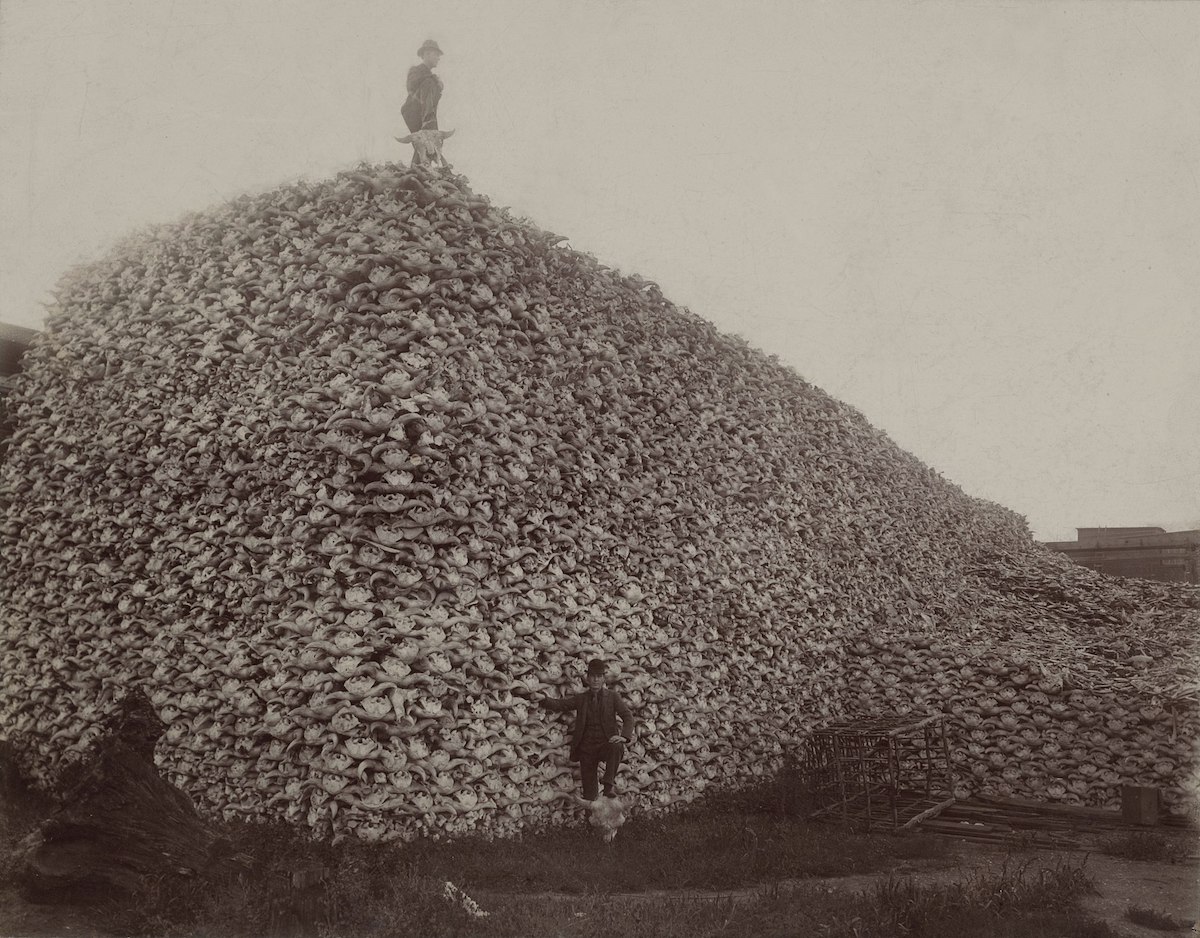 Gen. William Sherman, who commanded the U.S. Army in the region, negotiated treaties with groups of Indigenous peoples in the Great Plains in the late 1860s, Isenberg said. The U.S. agreed to allow Native Americans to occupy large parts of the Great Plains "so long as the buffalo may range thereon in such numbers as to justify the chase."

Not long after those treaties were negotiated, Isenberg said, Sherman wrote a letter saying, "it will not be long before all of the buffalos are extinct near and between the railroads."

In an 1872 report, Interior Secretary Columbus Delano wrote that the buffalo’s disappearance "must operate largely in favor of our efforts to confine the Indians to smaller areas, and compel them to abandon their nomadic customs, and establish themselves in permanent homes."

Although the decimation of the buffalo population was ultimately the work of private hunters, "the idea that destroying bison was a way to force the surrender of Indigenous people in the Great Plains was quite overt," Isenberg said.

No evidence of manufactured food shortages

While there is concern about global food shortages because of the war in Ukraine, experts told PolitiFact in April that the U.S. is less vulnerable to food shortages than poorer nations that rely largely on imports.

"The U.S. food system has a good level of self-sufficiency, so currently, it is hard to imagine empty shelves in grocery stores," said Ohio State University agricultural economist Seungki Lee.

And though claims have surfaced suggesting the U.S. government is intentionally creating food shortages, we have found there is no evidence to back that up. A number of factors have contributed to the U.S. baby formula shortage, including a recall by a major U.S. manufacturer, existing supply chain issues associated with the COVID-19 pandemic and the highly concentrated nature of the formula market. 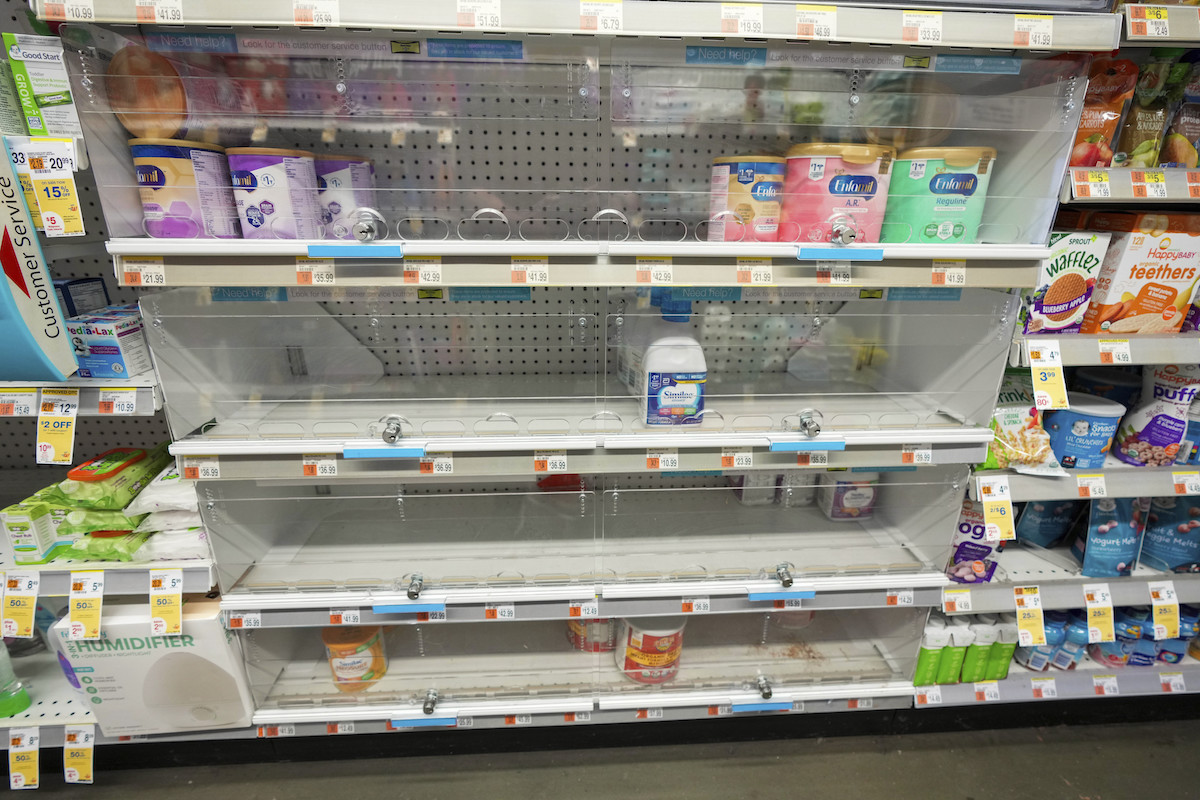 View of almost empty baby formula shelves at a Duane Reade in New York City on May 11, 2022. (AP)

A post claimed that the U.S. government’s inaction over buffalo killing that harmed Native American populations in the 1800s shows it is now "is creating food shortages" so that Americans are more "dependent on the government."

Millions of buffalo were killed by hunters in the late 1800s as part of a "de facto government policy" meant to force Native Americans in the Great Plains to abandon their customs and accept the reservation system.

This racist history, however, does not prove that the U.S. government is currently creating food shortages to force government dependence. We found no evidence to support that claim.

RELATED: Ask PolitiFact: What can parents do if they can’t find baby formula in stores?

Email interview with Andrew Isenberg, Professor of American history at the University of Kansas, May 16, 2022

Smithsonian Magazine, "Where the buffalo no longer roamed," July 17, 2012

Native Hope, "How the destruction of the Buffalo (tȟatȟaŋka) impacted Native Americans," accessed May 17, 2022

Fortune, "America is running out of baby formula because three companies control the market and babies aren’t that profitable," May 14, 2022

The University of Chicago Libraries, "Annual Reports of the Department of the Interior Volume 1," accessed May 17, 2022

Cambridge University Press, "The Destruction of Bison," accessed May 17, 2022