After spending two days on the island of Martha’s Vineyard, approximately 50 migrants, most of whom are from Venezuela, were moved to mainland Massachusetts on Sept. 16.

They weren’t deported, contrary to claims circulating on social media.

"Martha’s Vineyard leftists declared (a) humanitarian crisis and deported 50 illegals after only 24 hours," read one Sept. 15 Instagram post, which featured footage of a moving bus. 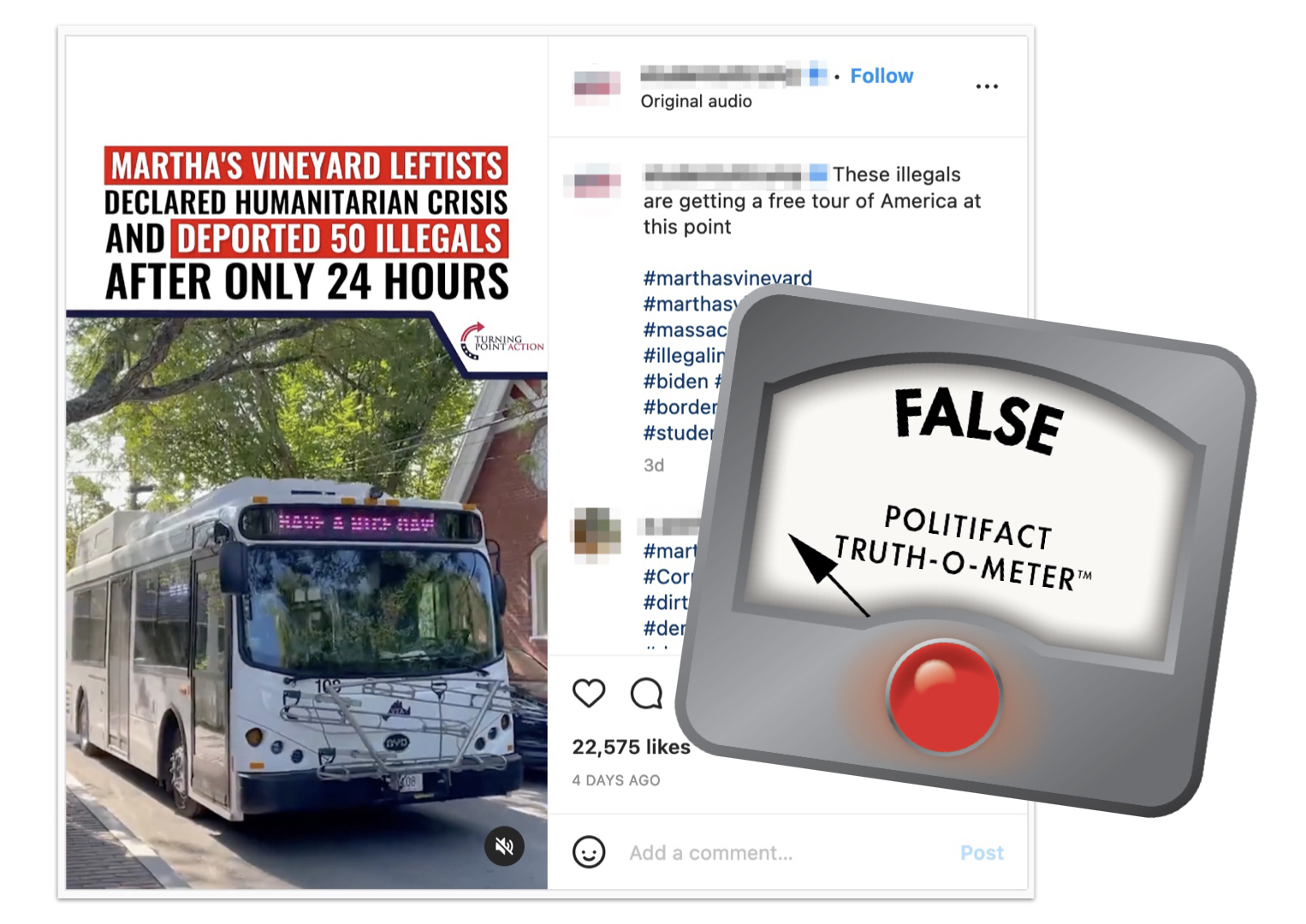 The Gateway Pundit, a conservative website, shared the same footage in an article that had a similarly misleading headline: "THAT WAS QUICK: Buses Arrive at Martha’s Vineyard and DEPORT Illegals Off the Island." The article was shared widely on Facebook.

These posts were flagged as part of Facebook’s efforts to combat false news and misinformation on its News Feed. (Read more about our partnership with Facebook.)

The claims mislead by misusing the term "deported."

Deportation refers to removal from the country, not relocation within the state

Deportations "are removals to an individual’s country of origin or, in some cases, to a third country," said Monika Langarica, a staff attorney at the Center for Immigration Law and Policy at the UCLA School of Law.

"Movement between states or regions within the United States is not a deportation," she said.

This video provied by the Massachusetts National Guard shows the dorms where immigrants will be staying at Joint Base Cape Cod.

Martha’s Vineyard residents worked with local and state officials to provide temporary shelter and necessities when the migrants arrived. But, long-term, Baker said "the island communities are not equipped to provide sustainable accommodation, and state officials developed a plan to deliver a comprehensive humanitarian response."

He said the state would offer transportation to the temporary shelter on the base and emphasized that the move from Martha’s Vineyard to the neighboring county would be "voluntary."

"Local governments or municipalities do not order or effect deportations," she said.

Buses have arrived in Edgartown to transport migrants from St. Andrew’s Parish House.

There is one big bus and two shorter buses to transport folks off the island. People with bags are taking selfies and hugging volunteers goodbye pic.twitter.com/wuauiZM4Y3

The migrants who arrived in Martha’s Vineyard were likely released by Customs and Border Protection after initial screening for asylum eligibility near San Antonio, according to news reports and experts.

Muzaffar Chishti, senior fellow at the nonpartisan Migration Policy Institute, told PolitiFact that when immigrants are released at the border, they don't enter state custody. While they await their immigration case hearings, many immigrants receive shelter from nonprofit organizations or travel to other states and cities within the U.S. where they have friends or family.

As of Sept. 19, some of the migrants had left Joint Base Cape Cod for New York City, where they had relatives or friends waiting, the local NPR station reported.

Despite the post’s claim, there’s no indication that government officials in Massachusetts or Dukes County, where Martha’s Vineyard is located, declared a "humanitarian crisis" because of the migrants’ arrival.

Additionally, Baker’s statements about the situation make no reference to a "humanitarian crisis."

RELATED: What we know about DeSantis flying migrants to Martha's Vineyard

Email interview with Monika Y. Langarica, a staff attorney at the Center for Immigration Law and Policy at the University of California, Los Angeles, School of Law, Sept. 20, 2022

Gateway Pundit, That was quick: Buses arrive at Martha’s Vineyard and DEPORT illegals off the island, Sept. 16, 2022

Cape Cod Times, Migrants flown to Martha's Vineyard may move to Cape Cod military base: What we know, Sept. 15, 2022

NPR, After migrants arrived in Martha's Vineyard, a community gathered to welcome them, Sept. 16, 2022

CNN, The migrants sent to Martha’s Vineyard will be voluntarily taken to a military base for shelter and support, Sept 16, 2022