Instagram posts
stated on January 4, 2023 in an image shared on Instagram:
Buffalo Bills player Damar Hamlin’s collapse was caused by the COVID-19 vaccine.

Buffalo Bills' Siran Neal (33) and Nyheim Hines react after teammate Damar Hamlin was injured during the first half of an NFL football game against the Cincinnati Bengals, Jan. 2, 2023, in Cincinnati. (AP)

National Football League player Damar Hamlin remained in critical condition Jan. 4, two days after he collapsed on the field midgame from what his team said was cardiac arrest.

While fans gathered outside a Cincinnati hospital to root for the 24-year-old Buffalo Bills safety and fellow players donated thousands of dollars to the charity he founded, misinformation swirled online about what led to Hamlin's condition.

Hamlin tackled Cincinnati Bengals receiver Tee Higgins during a Jan. 2 game at Paycor Stadium. As millions watched, Hamlin stood up after the hit and, moments later, fell to the ground.

Social media users seized on the incident and used it to suggest that COVID-19 vaccines contributed to Hamlin’s cardiac arrest. "Damar Hamlin: Pfizer kills a Black man on live TV and then tells us that we’re not supposed to talk about it," read a Jan. 4 Instagram post in text that overlaid an image of the team kneeling. 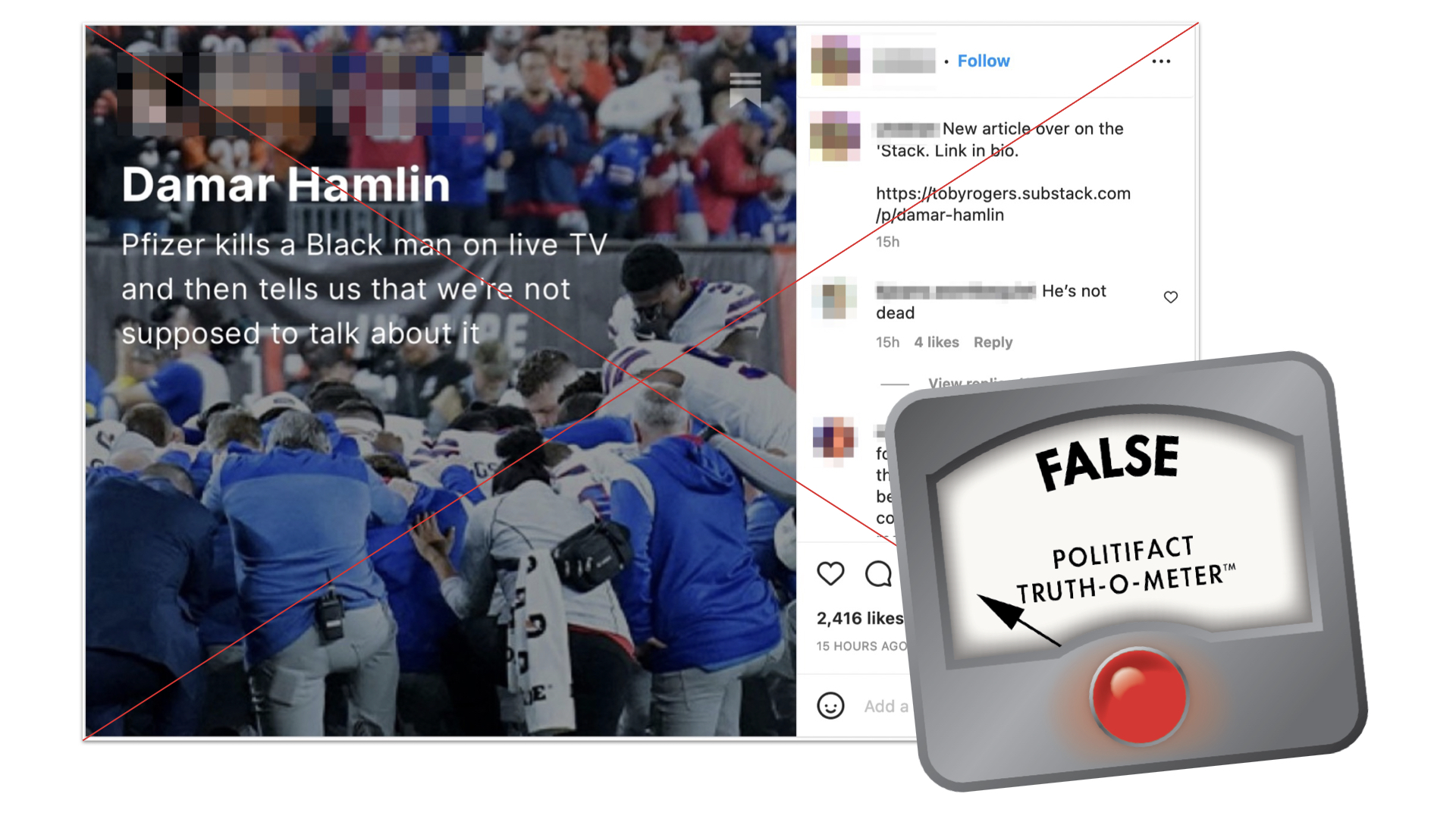 Charlie Kirk, founder of the conservative nonprofit Turning Point USA, tweeted that it was a part of a trend. "This is a tragic and all too familiar sight right now: Athletes dropping suddenly," Kirk wrote.

The notion that people are "dropping suddenly" is a familiar anti-vaccine narrative. We’ve seen and debunked numerous claims that the vaccines cause otherwise healthy people, including athletes, to die or fall suddenly ill.

The Instagram post and others were flagged as part of Facebook’s efforts to combat false news and misinformation on its News Feed. (Read more about our partnership with Meta, which owns Facebook and Instagram.)

Doctors are still piecing together what caused Hamlin’s collapse, but the experts closest to the case have not released any findings suggesting that it was caused by the COVID-19 vaccine. The Bills’ Jan. 3 statement said only that Hamlin experienced cardiac arrest "following a hit" in the game.

The NFL reported that 95% of its players were vaccinated as of February 2022, but Hamlin’s vaccination status is unknown.

"His heartbeat was restored on the field and he was transferred to the University of Cincinnati Medical Center for further testing and treatment," the Bills statement read. "He is currently sedated and listed in critical condition."

In a statement released on Twitter, Hamlin’s family thanked the first responders and health care professionals at the University of Cincinnati Medical Center for providing "exceptional care to Damar."

On the evening of Jan. 3, Hamlin’s uncle Dorrian Glenn spoke to a CNN reporter about his nephew’s condition. At the time, Glenn told an NFL Network reporter that Hamlin was sedated and on a ventilator in the intensive care unit.

A Jan. 4 update from the Bills on Twitter said: "Damar remains in the ICU in critical condition with signs of improvement noted yesterday and overnight. He is expected to remain under intensive care as his health care team continues to monitor and treat him."

Neither Glenn nor the family statement mentioned anything about vaccines. 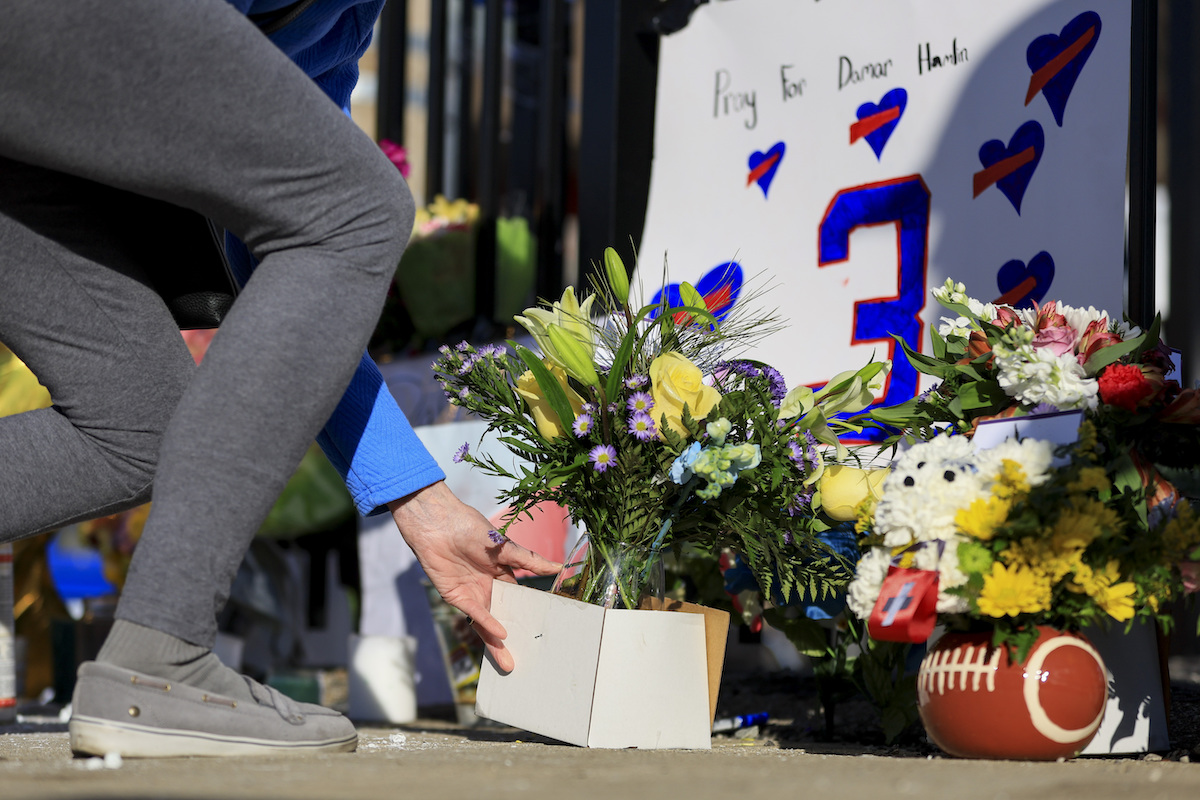 A person leaves flowers for the display set up for Buffalo Bills' Damar Hamlin outside of University of Cincinnati Medical Center, Jan. 4, 2023, in Cincinnati. (AP)

Experts say collapse could be linked to commotio cordis, other heart conditions

Beyond what is seen in the video, little is known about the circumstances or preexisting conditions that could have contributed to Hamlin’s cardiac arrest. But some experts who reviewed the footage said the incident may stem from an impact that happened before his collapse — a rare event called commotio cordis that is most often seen in young athletes.

It occurs when "a sudden impact to the chest causes sudden death in the absence of cardiac damage," according to an American Heart Association publication.

That’s what Dr. Mark Link, a University of Texas Southwestern Medical Center cardiologist, said he thought about after he viewed the footage.

"When I look at the video, it’s fairly typical of commotio — that is, someone gets hit in the side of the chest, they have 5 seconds where they stand up and do something, and then they go out like a rock," Link said Jan. 3 on ESPN.

Still, he said, it isn’t possible to say exactly what caused Hamlin’s cardiac arrest from the video alone.

"A number of things have to be ruled out," Link said. "They still have to look at other heart diseases to make sure he doesn’t have some underlying heart disease."

Commotio cordis is rare and occurs mostly among athletes ages 8 to 18 who are participating in sports with projectiles such as baseballs, according to the University of Connecticut.

"It has to be a perfect storm of events where there is an impact to the chest wall overlying the heart with just enough force, and what’s most critical is the timing," Madias said. "It happens within a critical period within the cardiac cycle. We’re talking about 20 to 30 milliseconds within the cardiac cycle that the heart is vulnerable to this."

Only a couple of dozen cases are reported each year, experts said.

Other factors could also have caused or contributed to Hamlin’s cardiac arrest, including any underlying heart condition, Madias said.

Link also noted that another common cause of cardiac arrest among athletes is a condition called hypertrophic cardiomyopathy.

"That’s a genetic condition that causes thickening of the heart muscle," he explained.

Hypertrophic cardiomyopathy can cause heart-related sudden death, and sometimes it is the first sign of the condition, according to Mayo Clinic’s website: "It can happen in seemingly healthy young people, including high school athletes and other young, active adults."

Rare cases of myocarditis and pericarditis — inflammation of the heart muscle and inflammation of the heart’s outer lining — have been reported after vaccination with the mRNA COVID-19 vaccines, according to the U.S. Centers for Disease Control and Prevention. Most cases occur within days of vaccination. The National Institutes of Health said the risk of myocarditis linked to COVID-19 infection is several times greater than the risk of vaccine-related myocarditis. 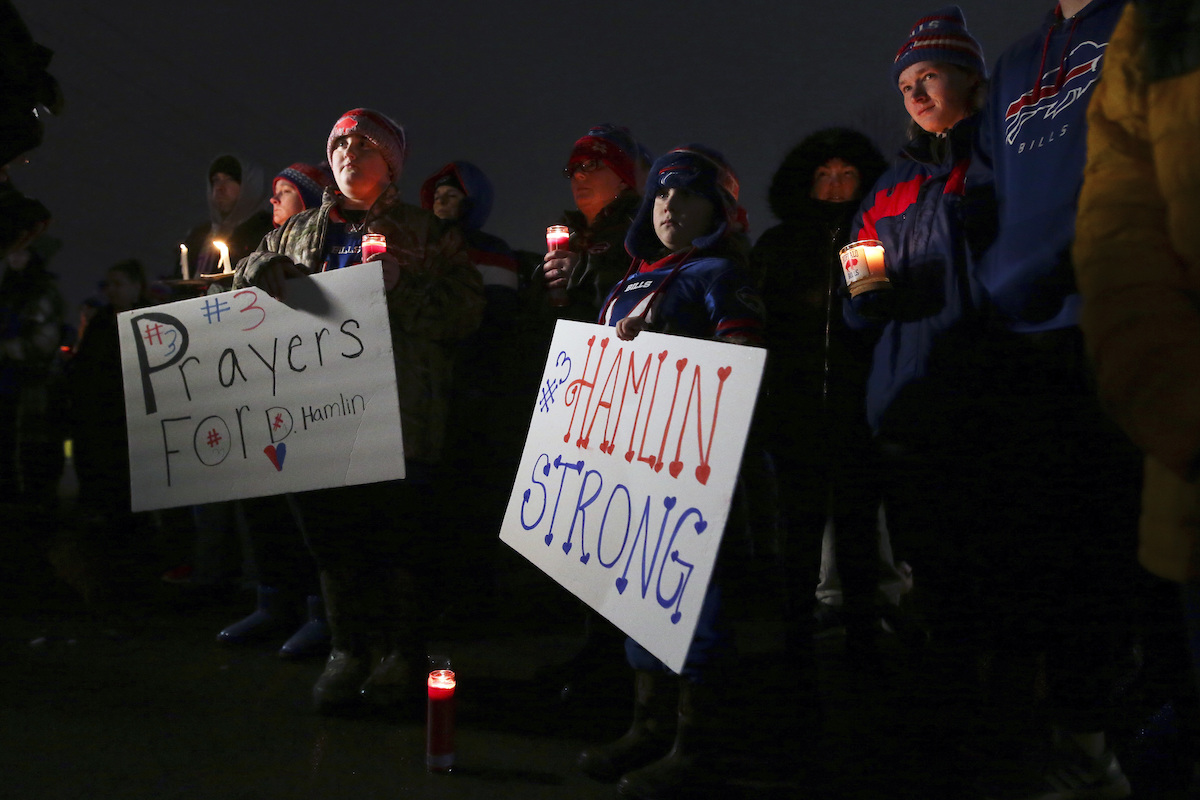 The Bills said Hamlin experienced a cardiac arrest following a hit on the field. Doctors are still investigating what might have led to Hamlin’s loss of heart function. No one close to his case has suggested that COVID-19 vaccines are to blame; and Hamlin's vaccination status is not publicly known. A growing body of research shows the COVID-19 vaccines are safe and effective. In some cases, they have been linked to inflammation of the heart, but experts say the risk of heart inflammation is greater from COVID-19 infection than the vaccine.

Experts who have viewed the video said Hamlin’s cardiac arrest was likely caused by commotio cordis, which is often seen among athletes who’ve taken hits to the chest, or potentially an underlying heart condition.

We rate claims that Hamlin’s collapse is attributable to COVID-19 vaccines False.

KHOU11, What is Commotio Cordis? Doctor describes what could be a traumatic injury to Damar Hamlin, CNN reports, Jan. 3, 2023

NPR, Buffalo safety Damar Hamlin, 24, collapses on the field in a game against Cincinnati, Jan. 3, 2023

NPR, Did Damar Hamlin experience commotio cordis? What to know about the rare phenomenon, Jan. 3, 2023