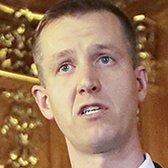 Dale Kooyenga, born February 12, 1979, was elected as a Republican in the fall of 2010 to represent the 14th District for the Wisconsin State Assembly. He was re-elected in 2012. He lives in Brookfield in suburban Milwaukee. Kooyenga, an accountant, is part of the so-called "CPA Caucus" in the Assembly. He is a U.S. Army veteran of the Iraq War and earned a Bronze Star for his service, his official bio states.