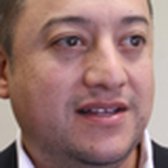 David A. Quiroa is president and  founding member of the Guatemalan-American Alliance of Rhode Island. Born in New York City, Quiroa was raised in Guatemala and California. After moving to Newport, R.I. in 1989, he worked as a waiter in a hotel restaurant and, after several raids by immigration authorities, began working to reform immigration laws through the Center for Hispanic Policy and Advocacy, known as CHisPa. Quiroa also is director of the Retired Senior Volunteer Program for the City of Cranston.