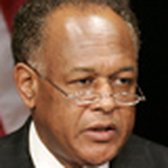 Dwight Jones, a Democrat, was elected mayor of Richmond in 2008 and was re-elected in 2012. He previously served as in the Virginia House of Delegates, representing the 70th District, which is composed of parts of Richmond, Henrico County and Chesterfield County. His term ran from 1994 to 2008. For eight years,  he was chairman of the Virginia Legislative Black Caucus. He also previously served on the Richmond City School Board and as its chairman from 1982 to 1985. Jones is also senior pastor of First Baptist Church of South Richmond. Jones earned bachelor of science and master of divinity degrees from Virginia Union University, Richmond, and a doctorate from United Theological Seminary, Trotwood, Ohio.