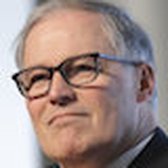 Jay Inslee is the governor of Washington. He was elected as governor in 2012. From 1993 to 1995, Inslee represented Washington’s 4th Congressional District. He represented Washington’s 1st Congressional District from 1999 to 2012. While representing the 1st district, he served on the Committee on Energy and Commerce. Inslee received his bachelor’s degree in economics and a J.D. from Willamette University School of Law. In 2019, he ran for the Democratic nomination for president and dropped out in August.