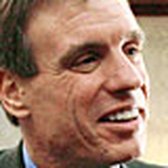 Mark Warner, a Democrat, has represented Virginia in the U.S. Senate since 2009. He serves on the Banking, Budget, Commerce and Intelligence committees. He is the honorary co-chairman of the Forward Together PAC. Warner gave the keynote address at the 2008 Democratic National Convention. Warner previously served as governor of Virginia from 2002 to 2006. He also ran unsuccessfully for the U.S. Senate in 1996. Before public office, Warner was an early investor in the cell phone business, co-founded the company that became Nextel. Warner was born in Indianapolis, Ind., and grew up in Illinois and Connecticut. Warner graduated from George Washington University, Washington, D.C. He received a law degree from Harvard Law School, Cambridge, Mass.