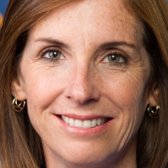 Martha McSally, a Republican, is a former U.S. Senator and former U.S. Representative from Arizona. McSally served 26 years in the U.S. Air Force, retiring in 2010 as a full colonel. She was the first female fighter pilot to fly a combat mission and command a fighter squadron. She was elected to public office for the first time when she won election to Congress in 2014.