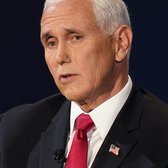 Mike Pence is the former vice president of the United States. A Republican, Pence was elected governor of Indiana in 2012. Pence previously served for 12 years as a congressman from Indiana representing the Sixth Congressional District; he was first elected in 2000. During his time in the U.S. House of Represenatives, he served as House Republican Conference chairman and chairman of the House Republican Study Committee. Pence was born in Columbus, Ind. He earned a bachelor's degree in 1981 from Hanover College and a law degree in 1986 from Indiana University. After accepting Donald Trump's offer to be running mate, Pence ended his 2016 campaign to be re-elected as Indiana governor.