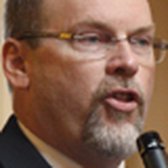 Morgan Griffith, a Republican congressman, represents Virginia's 9th District, which includes much of Southwest and part of Southside Virginia. He was first elected to the U.S. House in 2010. He serves on the House's Energy and Commerce Committee, which includes assignments on the Health, Energy and Power, and Oversight and Investigations subcommittees. He previously served in Virginia's House of Delegates from 1994 to 2011 and was the House Majority Leader beginning in 2000. Griffith graduated in 1980 from Emory and Henry College, Emory, and obtained a law degree in 1983 from Washington and Lee University School of Law, Lexington.