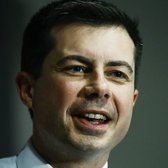 Pete Buttigieg is the Transportation secretary under President Joe Biden. Buttigieg was elected mayor of South Bend, Ind., in 2011 and was re-elected in 2015. He decided not to seek re-election and his term ended in January 2020. From 2009 to 2017, he served in the U.S. Navy Reserve and was a lieutenant. He received a bachelor’s degree in history and literature from Harvard College and a first-class honors bachelor’s degree in philosophy, politics and economics from Pembroke College as a Rhodes Scholar. He ran for president in the 2020 Democratic primaries.