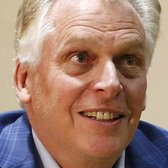 Terry McAuliffe, a Democrat, was elected governor of Virginia on Nov. 5, 2013. He received 47.8 percent of the vote in defeating Republican Ken Cuccinelli, who came in at 45.2 percent. Robert Sarvis, a Libertarian, finished a distant third with 6.5 percent. McAuliffe's inaguration as Virginia's 72nd governor is scheduled on Jan. 11, 2014. McAuliffe, a wealthy businessman and noted political fundraiser, was co-chairman of President Bill Clinton's 1996 reelection campaign. He was chairman of the Democratic National Committee from 2001 to 2005 and chairman of Hillary Clinton's unsuccessful presidential campaign in 2008. In 2009, McAuliffe unsuccessfully sought the Democratic nomination for Virginia governor. McAuliffe was born in Syracuse, N.Y., on Feb. 9, 1957. He has a bachelor's degree from The Catholic University of America, Washington, D.C., and a law degree from Georgetown University Law Center, Washington, D.C. McAuliffe has lived in Fairfax County for more than 20 years, is married and has five children.