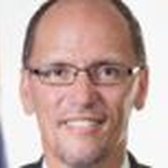 Thomas E. Perez was chosen as the chairman of the Democratic National Committee on Feb. 25, 2017. Previously he was nominated by President Barack Obama to serve as Secretary of Labor and was sworn in on July 23, 2013. He previously served as the Secretary of Maryland's Department of Labor, Licensing and Regulation.