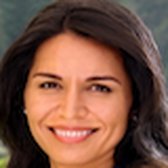 Tulsi Gabbard is a representative of Hawaii’s 2nd Congressional District. Elected to the office in 2012, Gabbard is the first Samoan-American and first Hindu member of the U.S. Congress. She was re-elected in 2014, 2016 and 2018. Gabbard has also been in active service for more than the past 10 years and has served in the Hawaii Army National Guard. Gabbard received a bachelor’s degree in business administration from Hawaii Pacific University. In 2019, she announced she is running for the Democratic nomination for president.