Tulsi Gabbard
stated on March 15, 2022 in a Fox News appearance:
"What is happening here is not so different from what we're seeing happening in Russia, where you have got state TV and controlled messaging across the board."

Speaking on Fox News amid Russia’s invasion of Ukraine, former Democratic presidential candidate Tulsi Gabbard falsely claimed that Russia and the U.S. are largely the same when it comes to the suppression of free speech.

The March 15 claim by Gabbard, a former congresswoman from Hawaii, came shortly after Russia arrested a journalist who protested the war on state TV and enacted a law threatening up to 15 years of prison time for spreading "false information" about the Ukraine invasion.

Fox News host Jesse Watters teed up Gabbard’s segment by playing a clip from ABC’s "The View," when a host suggested that Gabbard and Fox News host Tucker Carlson should be federally investigated for "shilling" for Russian President Vladimir Putin. Watters then claimed Democrats are "seeking out ways to silence free speech."

"Tulsi, it is striking when you see Putin propaganda and you line it up against Biden propaganda," he said. "Do you think that we’re at risk of kind of moving in that direction right now?"

Gabbard responded that the U.S. is "moving in that direction," claiming its leaders and media are "afraid of even a single voice coming out as challenging the power elite." She continued:

"This is what’s so dangerous about the place that we’re in right now as a country, where this idea, this principle, this foundation of freedom of speech, freedom of expression is directly under threat and under attack. And you’re right, it’s not so different. What’s happening here is not so different from what we’re seeing happening in Russia, where you’ve got state TV and controlled messaging across the board. This is where we’re at."

The claim is "absurd," said Scott Gehlbach, a professor of political science and an expert on Russia and Ukraine at the University of Chicago.

"In Russia, one can now face up to 15 years in prison for simply calling a war a war," Gehlbach said. "In the U.S., citizens such as Tulsi Gabbard are free to make not only truthful but untruthful statements without fear of legal sanction."

Russia has long trampled its independent press and citizens’ freedom of speech.

Opposition leader Alexei Navalny, a prominent Putin critic, was arrested in 2021 and recently added to the country’s registry of terrorists and extremists.

The Kremlin’s restrictions, tightened further since its invasion of Ukraine, have driven citizens to use virtual private networks and encrypted servers to access factual information.

"The state in Russia is criminalizing speech and locking people up," said Rutgers Law School professor Ellen Goodman, the co-director of the university’s Institute for Information Policy and Law. "That is not happening in the U.S. — not at (the) hands of private parties or state."

Russia shuttered its main independent broadcasters and cut access to international outlets like the BBC. It also blocked Facebook and Instagram and hamstrung users' ability to use Twitter. Each of those platforms — along with TikTok, which suspended new videos and live streaming in Russia in response to Russia’s law against "false" information — remain available in the U.S. 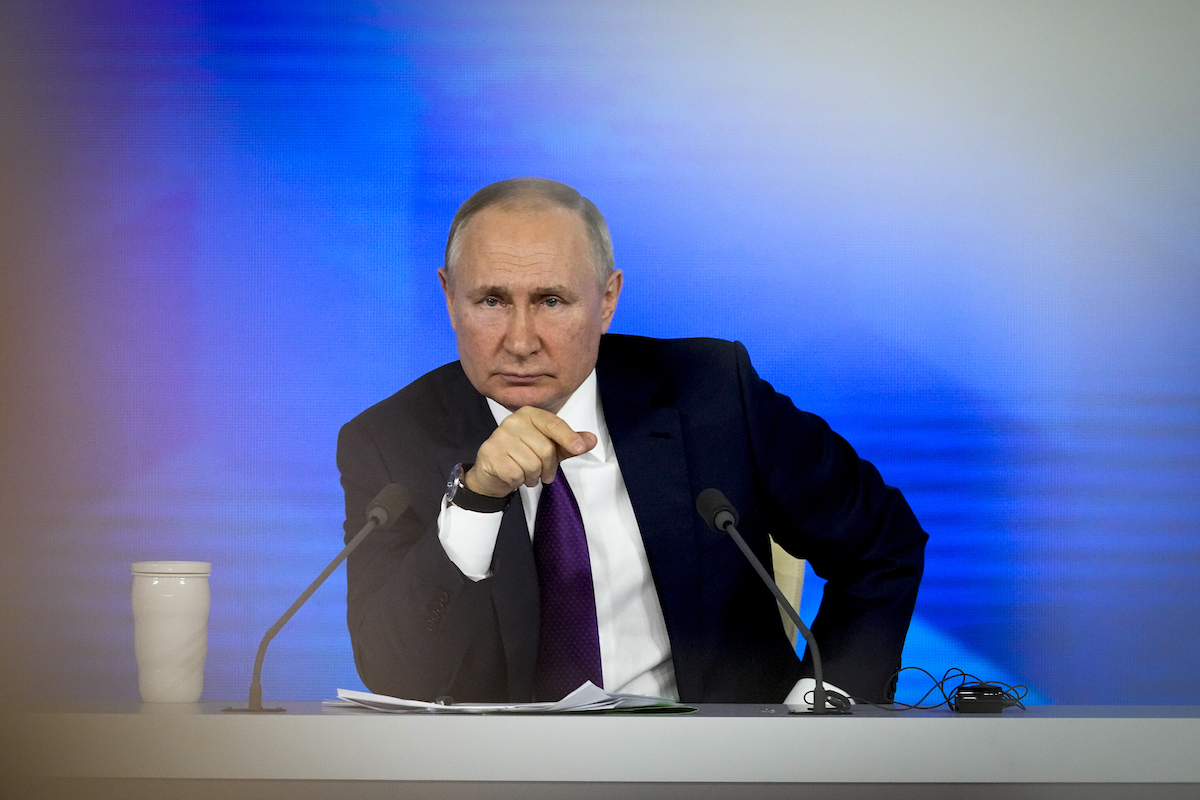 "Russia is exercising extraordinary powers of censorship unseen in Russia since the Soviet era," said David Kaye, a clinical professor of law at the University of California, Irvine, and the former United Nations special rapporteur for freedom of opinion and expression. And it is filling the information void entirely with state-controlled media pushing the government’s messages.

"Is there anything remotely like this in the United States? No," Kaye said. "The U.S. government lacks power under the Constitution to engage in the kind of actions taking place in Russia."

News organizations in the U.S. operate independently of the government’s demands and create a diversity of information not easily found in countries with state-controlled media. That includes the U.S.’s state-owned outlets like Voice of America, which have editorial independence.

And while mainstream U.S. news organizations sometimes produce similar coverage, that’s a far cry from "having that consensus chiefly stem from government coercion," said UCLA law professor Eugene Volokh, a Ukrainian-American and expert on First Amendment law. He added that speech in the U.S. is "immeasurably freer" than in Russia.

Gabbard told PolitiFact that she was not saying that "our lack of freedom of speech in the United States is as bad as in Russia," but that it’s heading that way.

Institutions in Russia and the United States "exert great control and influence" over what people see and hear, causing people to fear that they will "suffer" if they say or do something different, she wrote in an email.

"In Russia, it is a powerful state/government which exerts such control," Gabbard said. "In the United States, there is similar control but instead of the state directly having such control, it is giant tech and social media companies which are politically aligned with and work closely with those who hold political and institutional power."

Gabbard’s argument echoes conservative allegations of Big Tech bias and censorship against them. But plentiful research has cut against those claims.

Another 2021 study by researchers at New York University concluded that the allegations that social media companies censor conservatives are "unfounded."

"I know of no academic research that concludes there is a strong systemic bias — liberal or conservative — in how social media platforms identify what to show to users or in how they enforce their terms of service in content moderation decisions," said Steven L. Johnson, an associate professor of commerce at the University of Virginia who has studied social media.

Some Republicans, including former President Donald Trump, have had accounts suspended, restricted, or marked with fact-checking labels. But those penalties have generally resulted from specific violations of the various platforms’ community guidelines.

Gabbard said, "What is happening here is not so different from what we're seeing happening in Russia, where you have got state TV and controlled messaging across the board."

Since its invasion of Ukraine, Russia — a country with a long history of suppressing free speech and access to information — has restricted dissenting voices, independent news reporting and public discourse on social media platforms, including with a new law threatening prison time for spreading "false" information about the war. Those measures are without parallel in the U.S., where freedom of speech, expression and the press are enshrined in the Constitution.

Mediaite, "Tulsi Gabbard Claims U.S. ‘Is Not So Different’ From Russia When It Comes to Censorship," March 15, 2022

The Washington Post, "Employee bursts onto live Russian state TV to denounce war: ‘They are lying to you here,'" March 14, 2022

Email interview with Steven L. Johnson, associate professor of commerce at the University of Virginia, March 16, 2022

Email interview with Scott Gehlbach, professor of political science at the University of Chicago, March 16, 2022

Email interview with David Kaye, clinical professor of law at the University of California, Irvine, March 16, 2022