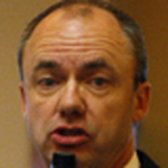 Ward Armstrong, D-Henry County,  was a  a member of the Virginia House of Delegates from 1992 to 2012, serving the final five years as minority leader. He served on the Courts of Justice, Finance, and Rules committees. In 2011, House Republicans merged Armstrong's district with that of another incumbent, Republican Charles Poindexter. Armstrong was defeated by Poindexter that fall. ,